(ANNews) – On March 5 citizens and communities within Alberta’s Capital Region will have an opportunity that only five other Canadian cities have enjoyed during the past three years, a chance to visit and view one of the most prestigious art collections of our time. From March 5 through July 3, 2016 the Alberta Art Gallery  (AGA) will present the exhibition 7: Professional Native Indian Artists Inc. (PNIAI), a unique and rare collection of paintings by the renowned First Nations artists that came to be known as the Group of Seven.

The artwork that will be included in this particular exhibition will focus on the work the artists did in the 1970s, the decade that saw the dawn of a new era for Aboriginal artists and the work they create. It was the decade that prominent Aboriginal artists put an end to the age-old myth that Aboriginal art was little more than arts and crafts and not worthy of national or international recognition.  The 1970s will go down in history as the decade that began to change the tide for Aboriginal peoples in Canada. These accomplished and recognized artists changed the world of art, but more than that, they brought a new awareness to Canadians and to the world that Aboriginal people have played and continue to play a very significant role in the development of our societies. 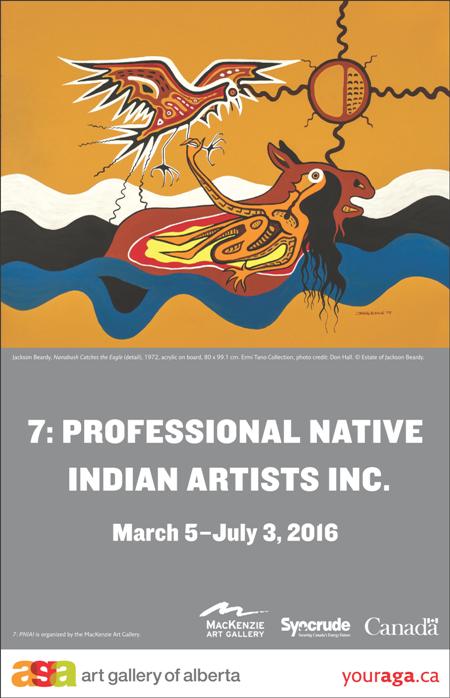 “This particular exhibition,” noted curator Michelle LaVallee, “took more than half a decade to organize. The magnitude of the project, reflected by the profoundness of the collection and the expertise of the seven contributing artists, is something that every Canadian can appreciate and admire.”

LaVallee, whose Anishinaabe ancestry has helped to add even greater impact to this significant exhibition of work, is employed as the Curator of the MacKenzie Art Gallery in Regina, Saskatchewan. She has been with the project since the beginning; in fact she was in on the early meetings and was instrumental in launching the initiative and in bringing the project from the dream-stage to a reality.

“During the 1970s,” explained LaVallee, “that group stimulated a new way of thinking about the lives and art of First Nations people. Inspired by the legacy of their ancestors, they translated a world of knowledge based on individual experience and cultural heritage. While their styles and techniques vary from artist to artist, a contemporary indigenous aesthetic is apparent in the vivid colors, dynamic forms, and non-European sensibility that pervades their work. Though their personal aspirations were diverse, their collective vision of PNIAI made them frontrunners in the development of contemporary Indigenous art.”

LaVallee, accompanied by artists Alex Janvier and Joseph Sanchez, have been to the opening of all five exhibitions to date, and will all be participating in Edmonton.  On Saturday March 5 at 1 pm, the trio will be presenting a free lecture to to discuss their experience in the creation of 7: Professional Native Indian Artists Inc. There is no charge for this event but seating is limited; click here to reserve a spot at the presentation. 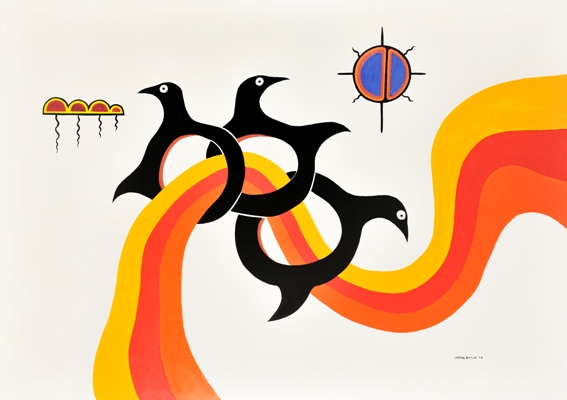 Flock by  Jackson Beardy from the Collection of Aboriginal Affairs and Northern Development Canada will be on exhibit at the Alberta Art Gallery as part of the 7:PNIAI exhibit.

“The exhibition has been very well received right across the country and we are confident that trend will continue in Edmonton; Canadians are keen to learn more about Aboriginal culture,” said LaVallee, who as well as organizing and curating the country-wide tour, is responsible for putting together the remarkably well written and beautifully designed catalogue that has accompanied the exhibition during its lengthy tour.

The ongoing and escalating interest in the project remains high and indicative of the fact that there is no better way to learn about the cultures and traditions of a people than through the exploration of the art and artists who tell the stories of their people through their unique works of art. 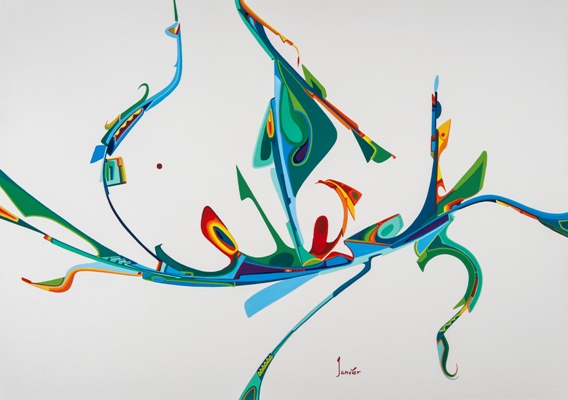 “It is truly an honour to work with Michelle and everyone else involved in this incredible undertaking,” smiled AGA Exhibition Coordinator and part-time curator, Laurie Ritchie, who became involved in the project about 18 months ago. “The art is breathtaking, the historical significance is extraordinary, the work of these exceptional Indigenous artists is internationally renowned and the impact they’ve had on the art world over the decades remains just as strong today.” 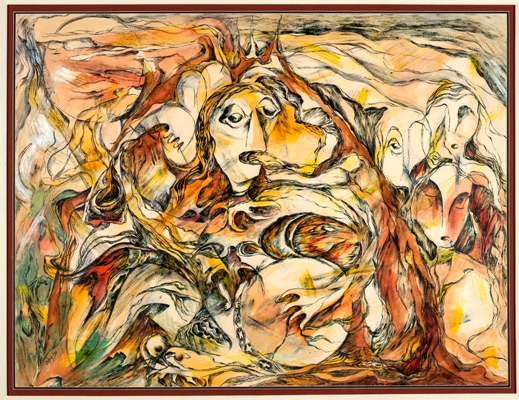 “Alex and Joseph will attend the opening here in Edmonton; Daphne Odjig, now 96 years of age, is not confirmed, but may also attend,” noted Ritchie in a recent interview. “This is an incredible opportunity for Albertans and all Canadians to move even closer to their Aboriginal brothers and sisters. These are the works of artists who have helped to not only create history but to change it as well. They found a way to knock down the barriers, to become recognized not only as brilliant painters and artists, but as game changers who ensured that Aboriginal people, their values, their contributions to society and their magnificent art lived on and continued to thrive. This exhibit is one of the largest and most important exhibitions of art being showcased in Canada this year and it has garnered the interest and attention of the country. The Group of Seven exhibit is a once-in-a-lifetime opportunity and I encourage everyone to take the time to enjoy it.”

The exhibition 7: Professional Native Indian Artists Inc. draws on both private and public art collections to bring together over 80 paintings and drawings from the 1970s, that crucial decade during which the seven artists were active as a group. 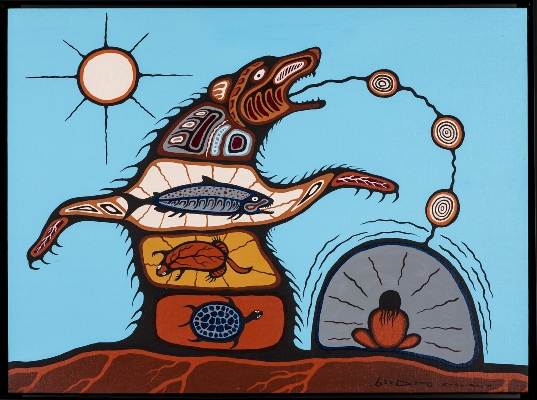 “The exhibition considers their collective artistic impact, as well as the distinctive styles and experimentation of the individual artists,” noted LaVallee in the exciting and eye-pleasing must-have catalogue she compiled for the exhibition. “The history of Professional Native Indian Artists Incorporated signalled a new course for the exhibition and understanding of contemporary Indigenous art. The visual impact of this exhibition will reacquaint visitors with the excitement and newness of the images and styles that these seven artists produced.”

The 359 page catalogue that highlights articles, artwork and commentary by the artists also includes the reflections of LaVallee. In the catalogue she writes: “I am witness to the spirit that pours out of the works of the PNIAI and into the hearts of so many. I am humbled and proud to be in a position to honour this Group and their legacy, yet I am conscious that I have barely scratched the surface. For the last thought, I defer to the insights of Alex Janvier, who shared these words with a full house at the opening night of the exhibition at the MacKenzie Art Gallery: “What you see here is a true story, and that’s how it began, and ever since then we haven’t stopped. Members of this Group, some of them have gone on to their graves, but you’ll see their work, they will talk to you with their art. Our story is really a Canadian story, a real Canadian story. It comes from here, by the people from here, and it’s about here. I welcome all of you to take a good look and be proud. I’ve travelled around the world quite a bit, but when you come back to Canada, you almost want to kiss the earth that you come from because it’s so good to come home. This art here – I hope will give you the same feeling that every one of you has come home.”

7: Professional Native Indian Artists Inc. is organized by the MacKenzie Art Gallery. This project has been made possible through a contribution from the Museums Assistance Program, Department of Canadian Heritage. The MacKenzie receives ongoing support from the Canada Council for the Arts, the Saskatchewan Arts Board, SaskCulture, the City of Regina, and the University of Regina. The Edmonton exhibition at the Alberta Art Gallery is being sponsored by Syncrude Canada.

For more information about the exhibit visit youraga.ca.

Li Salay explores the shifting boundaries of Metis art: opens at the AGA on May 26

Be the first to comment on "Mar. 5: Art Gallery of Alberta opens legendary Indian Group of 7 exhibition"