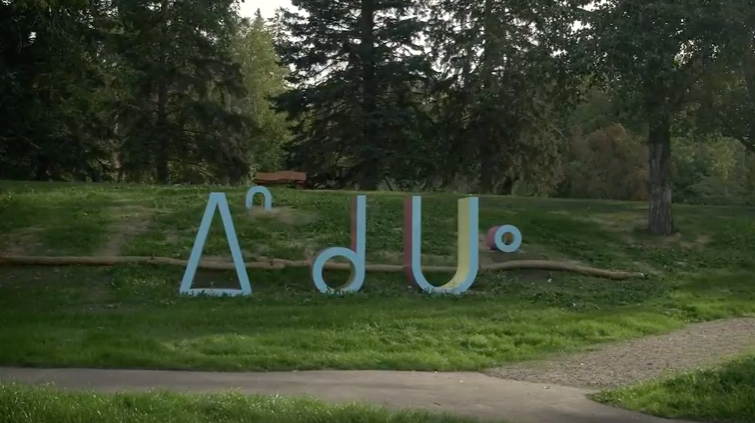 Take a virtual tour of ᐄᓃᐤ (ÎNÎW) River Lot 11∞ and enjoy interviews with the artists with this beautiful video made by Conor McNally.

The province of Alberta has declared that January is the Month of the Artist and one of the most recent additions to the public arts scene in Edmonton is an Indigenous Art Part.

The City of Edmonton, Confederacy of Treaty Six First Nations, Métis Nation of Alberta, Edmonton Arts Council and Indigenous artists and community members have partnered since 2013 to develop an Indigenous Art Park in Edmonton that will permanently exhibit Indigenous artworks.

ᐄᓃᐤ (ÎNÎW),pronounced (EE-NU) is a Cree word meaning “I am of the Earth.” The Art Park is situated on ancestral lands of the Indigenous peoples whose descendants entered into Treaty with the British Crown resulting in the territory opening for settlement. River Lot 11 acknowledges the historic river lot originally home to Métis landowner Joseph McDonald. The park is located within Queen Elizabeth Park in Edmonton’s North Saskatchewan River Valley.

About the Site
Queen Elizabeth Park is located in the North Saskatchewan River Valley, across the river from the Rossdale community between Walterdale Bridge and Saskatchewan Drive on Edmonton’s south side. Located between Edmonton’s downtown and Old Strathcona, the park bridges two key tourist and citizen destinations and overlooks landmarks such as Alberta’s Legislature Building and High Level Bridge. The area has a rich history. The land, a few miles south of the river, was historically the reserve of Chief Papaschase’s Band. The immediate park area was part of River Lot 11 homesteaded by early Métis settler Joseph McDonald.

The City of Edmonton is home to Canada’s second-largest urban Indigenous community. For centuries this area has been a place of gathering, relationship building, harmony, balance, and commerce for many peoples. It was in this place that early relationships led to the creation of Treaty No. 6, the Province of Alberta, and the City of Edmonton.

In September 2013, the Edmonton Arts Council and City of Edmonton co-presented a weekend “visioning workshop” at Sun and Moon Aboriginal Arts Society. The primary intent of the visioning workshop was to inform Indigenous artists, Edmonton’s Indigenous communities, and the general public about the park concept, and engage them in its creation. Attendees included 16 Indigenous artists from Edmonton and across Canada, as well as representation from Edmonton’s Indigenous communities.

Funding for the Indigenous Art Park was approved by City Council in December 2014, and a Steering Committee was implemented. The Steering Committee provides leadership and strategic direction for the art park and advises on all consultation, engagement, and administrative processes. The Steering Committee includes members from the City of Edmonton, Edmonton Arts Council, Confederacy of Treaty Six First Nations, and the Metis Nation of Alberta, as well as Elders and Indigenous artists/community members.

Based on this immersion into the stories, histories, and cultures of “this place” the artists then created full artistic designs and models. The six final concepts were unveiled to the public in April, 2016. ᐄᓃᐤ (ÎNÎW) River Lot 11∞ opened to the public on Saturday, September 15, 2018.

Take a virtual tour of ᐄᓃᐤ (ÎNÎW) River Lot 11∞ and enjoy interviews with the artists with this beautiful video made by Conor McNally.

“Alberta is the first province in Canada to dedicate a month to celebrate artists,” noted Alberta Minister of Culture, Ricardo Miranda. “It is a way to raise awareness of the challenges artists face and the value they bring to our province. Art is work. Art creates jobs, and art contributes to our growing economy.

“Throughout January, I encourage everyone to learn more about the people behind the art in their community and to find ways to support local artists. Our province is full of amazing events that feature work by Alberta artists. Take in a show at your local theatre. Visit an art gallery. Go to a concert. Or try something new and let your creativity blossom.

“I am proud that our government is supporting the hard-working artists who build Alberta’s rich social fabric and our economy. I hope everyone enjoys Canada’s first Month of the Artist.”