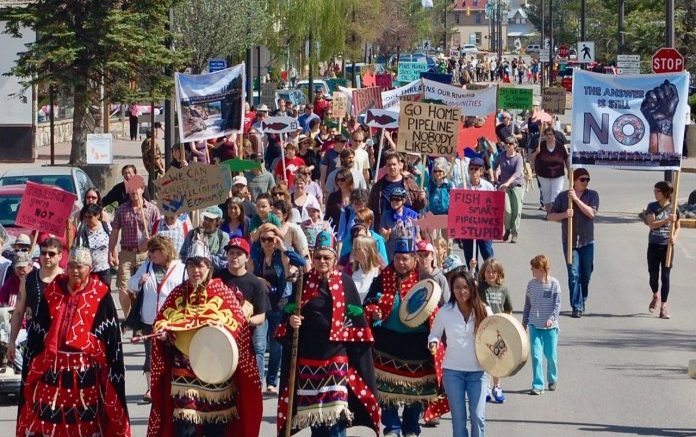 January 7, 2019 – Rallies in 30 cities expressing solidarity with the Wet’suwet’en will take place on Tuesday January 8, 2019 across Canada and internationally. The Wet’suwet’en are defending their unceded lands in Northern B.C. from unwanted fracked gas development

Details for the rallies can be found at: https://www.facebook.com/events/2225649537692362/ and on Tuesday January 8, 2019 photos and video will be available through #wetsuwetenstrong #notrespass #thetimeisnow.

According to rally organizers, “We oppose the use of legal injunctions, police forces, and criminalizing state tactics against the Wet’suwet’en asserting their own laws on their own lands. This is a historic moment when the federal and provincial governments can choose to follow their stated principles of reconciliation, or respond by perpetuating colonial theft and violence in Canada.”

Coastal GasLink, a project of TransCanada Corporation, has been constructing a 670-kilometer fracked gas pipeline that will carry fracked gas from Dawson Creek, B.C. to the coastal town of Kitimat, where LNG Canada’s processing plant would be located. LNG Canada is the single largest private sector investment in Canadian history, with support from the Federal Liberal government and tax breaks from the NDP B.C. provincial government.

Under ‘Anuc niwh’it’en (Wet’suwet’en law) all five clans of the Wet’suwet’en have unanimously opposed all pipeline proposals and have not provided free, prior, and informed consent to Coastal Gaslink/TransCanada to do work on Wet’suwet’en lands. The 22,000 square km of Wet’suwet’en Territory is divided into 5 clans and 13 house groups. Each clan within the Wet’suwet’en Nation has full jurisdiction under their law to control access to their territory.

According to the Wet’suwet’en Access Point on Gitdumden territory, who issued the call for international solidarity, “All Wet’suwet’en Clans have rejected the Coastal GasLink fracked gas pipeline because this is our home. Our medicines, our berries, our food, the animals, our water, our culture are all here since time immemorial. We are obligated to protect our ways of life for our babies unborn.”

On December 2018, the B.C. Supreme Court issued a court injunction that authorizes the RCMP to forcibly clear a path through the Wet’suwet’en Access Point on Gitdumden territory and the Unist’ot’en homestead on Unist’ot’en territory. This is despite the fact that the Supreme Court of Canada ruled in the landmark 1997 Delgamuukw-Gisday’wa case that the Wet’suwet’en, as represented by their hereditary leaders, had not given up rights and title to their 22,000 square kilometers of land. Members of the RCMP met with Hereditary Chiefs in January 2019 and indicated that specially trained tactical forces will soon be deployed.

“Canada knows that its own actions are illegal,” states the Wet’suwet’en Access Point on Gitdumden territory. “The Wet’suwet’en chiefs have maintained their use and occupancy of their lands and hereditary governance system to this date despite generations of legislative policies that aim to remove us from this land, assimilate our people, and ban our governing system. The hereditary chiefs of the Wet’suwet’en and the land defenders holding the front lines have no intention of allowing Wet’suwet’en sovereignty to be violated.”

Be the first to comment on "Rallies in support of Wet’suwet’en stand against fracked gas development will be held January 8, 2019"