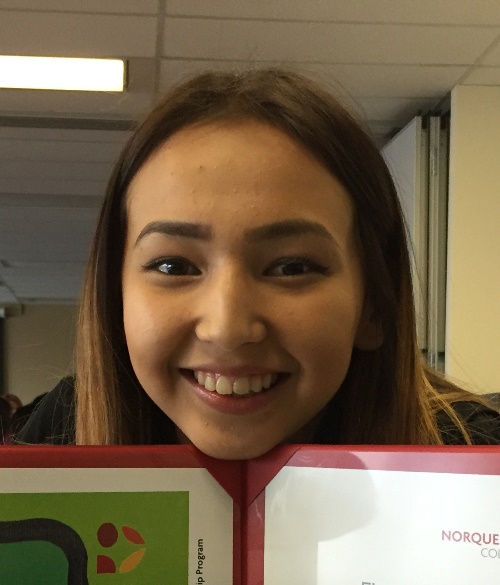 (Edmonton) – Prior to attending NorQuest College’s First Nations, Métis & Inuit Summer Youth Leadership Program, 16-year-old Misty Carson of the Paul First Nation viewed her own interpersonal skills like many youngsters do: With fear and trepidation.

“I didn’t want to come here,” she said in an articulate message delivered to fellow attendees on the camp’s last day. “My mom made me. But what surprised me the most about this program was it taught me bravery. I took a leap and made myself go for it. I have trust issues, but I was able to open up to my teammates and learned that if you guys were willing to trust me, I should trust you. I am really glad my mom signed me up. I have no regrets and, if anything, I will leave here with great thoughts.”

Over the course of the two-week camp, which came to a close August 25, youth from mostly the Edmonton region discovered things about themselves they never knew existed. 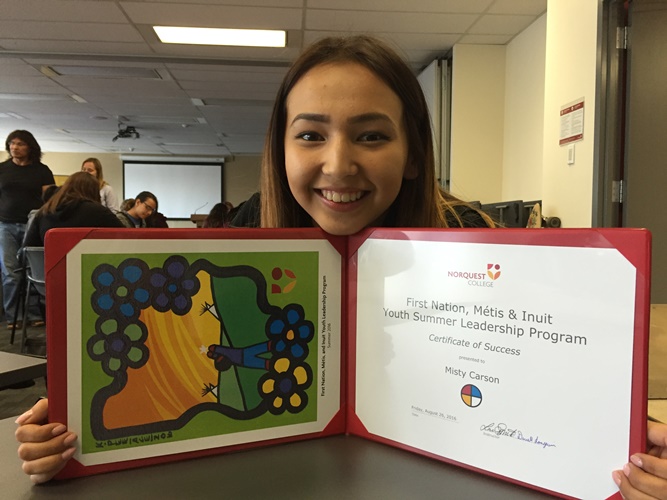 “I pushed myself to become better,” said Carson. “And I am proud of that.”

The theme of the program, held on location at the college and at various other locales around the region, focused on self-esteem and leadership development. Each student took part in activities such as volunteering at the food bank, learning about the uses of Indigenous medicinal plants, and even physically-testing events like team building on the high rope obstacle course at the Oak Hill Boys Ranch near Bon Accord. Classroom sessions, a trip to a sweat lodge on the Enoch Cree Nation, and seminars such as Teens in Conflict Together, were also part of the programming.

“I feel like I showed strength, courage, and confidence,” said 17-year-old Johnny Belcourt whose roots lie in the Cowessess First Nation in Saskatchewan, but who now lives in Edmonton. “Being a leader to me is showing these strengths. I also improved my social skills. I met new friends and had a lot of fun.”

For program instructors, the transformation of many of the students from the start to the finish proved inspirational.

“Some of these lessons take lifetimes to learn,” said Darrell Giroux-Langevin, a NorQuest College instructor and member of the Swan River First Nation. “But these kids had an opportunity to process the things they learned and talk about it later.”

That communication, he added, was the first time many of the students took the time to speak in public about their fears, future plans, and desires. He believes it was an invaluable exercise.

“In the future they are going to be confronted with obstacles like education,” he said. “And they are going to feel like giving up, just like they felt on that obstacle course. But now they have this to look back on. For them to persevere like they did, and make it through the two weeks the way they did, that was just so amazing.”

Education and incentive are a winning combination to success