(ANNews) – Heard All Over is her traditional Indian name but to visitors, staff and others at the world-famous Calgary Stampede, she is known as Vanessa Stiffarm, the 2016 Calgary Stampede Indian Village Princess.

The 26 year-old jingle and fancy dancer hails from the Kainai First Nation in southern Alberta. She explains her name as coming from the sound of thunder, something one can hear all over.

Not only is she heard all over, she has also been travelling and seen all over – the world, that is.

Upon being declared the 2016 Indian Village Princess last October, Stiffarm was invited as a special guest of the 2016 Grey Cup football final in Winnipeg last November, “an experience I’ll never forget,” she exclaimed. 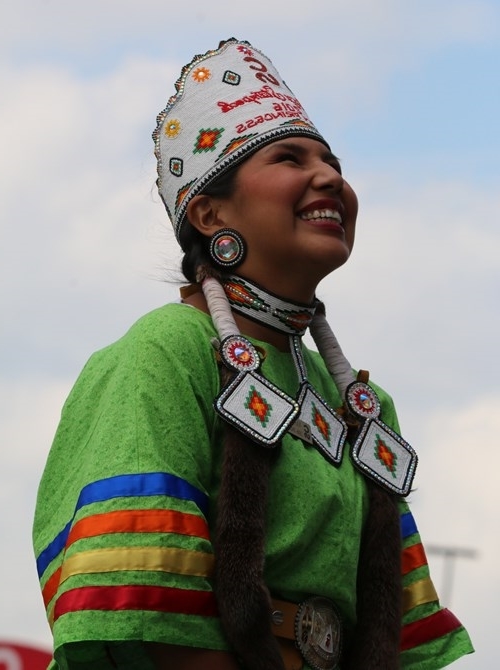 Since then, she has visited such distant parts of the world as Australia, Germany and England in addition to many points of eastern and western Canada “where I performed jingle dances.”

For Stiffarm it has been quite the emotional roller-coaster ride. “I am truly blessed and humbled to have this opportunity,” she added.

She understands that she not only represents her home community, the Kainai First Nation, but, “all of Treaty Seven, the Indian Village and the Calgary Stampede.”

“It’s an incredible honour to carry this title,” she stated.

Raised by her parents and grandparents, Stiffarm always admired the Calgary Stampede’s Indian Village Princesses and she cherishes her existing relationship with other Stampede royalty, in particular Stampede Queen Maggie Shortt and her two princesses – Bailee Billington and Chelsey Jacobson.

Today she does her best to encourage First Nations people, especially youth, “to strive for success and goals while retaining their own traditions and culture.” It is her responsibility, she feels, to inspire others the way she, herself, has been inspired by her own experiences that have resulted from her role as the princess. 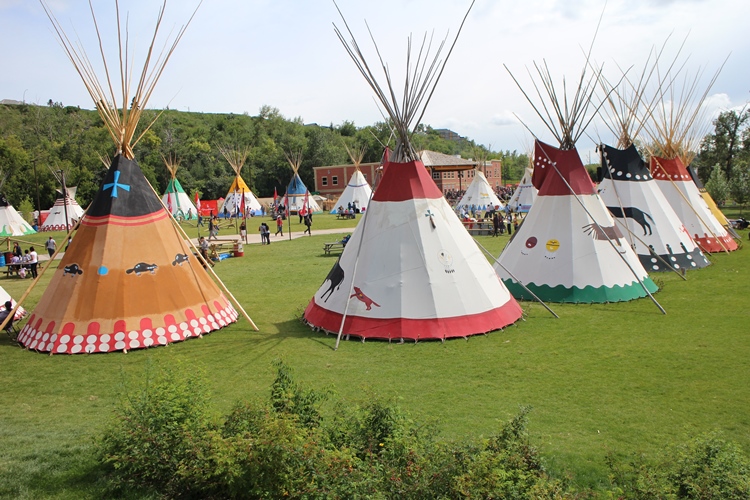 The new Indian Village at the 2016 Calgary Stampede. Photo by Terry Lusty

On Thursday, July 7, the Stampede proudly opened the new site of the Indian Village in the extreme northeast corner of the grounds at the backside of Penngrowth Saddledome.

The very first Indian village was created in 1923 at the Sun Tree Park, the area that now plays host to singers, live concerts and entertainers at what is called the Coca – Cola Stage.  Fifty-one years later, in 1974, the village relocated to an area south of the grandstand, and across the Elbow River.

Today, 2016, it sits on land that is approximately two and-a-half times larger than its former site. Back in the early 1960’s the property served as a parking lot. Now situated between Scotsmans Hill and the Elbow River, it presents luscious green grass lawns and trees, the Cenovus Legacy Trail with signs that offer historical Native history to visitors as well as a rainbow trout art-piece, plenty of recreational and picnic space and two new contemporary buildings.

One of the buildings – the Sweetgrass Lodge – is a facility made possible thanks to a 3.5-million-dollar commitment from Suncor Energy. Within the new structure is space for washrooms, change rooms for dancers and other performers, office and storage space, plus an area for craft sales and, of course, that ever-popular food staple, bannock. The bannock booth is a main attraction with frequent long line-ups.When not in use for Stampede events in July, the new structure will accommodate educational programming such as Native culture, history and traditions.

This year the spacious village again hosted its usual daily activities, such as: arts and crafts vendors; drumming, singing and dancing; traditional foods; storytelling; open houses (for tipis), and more.