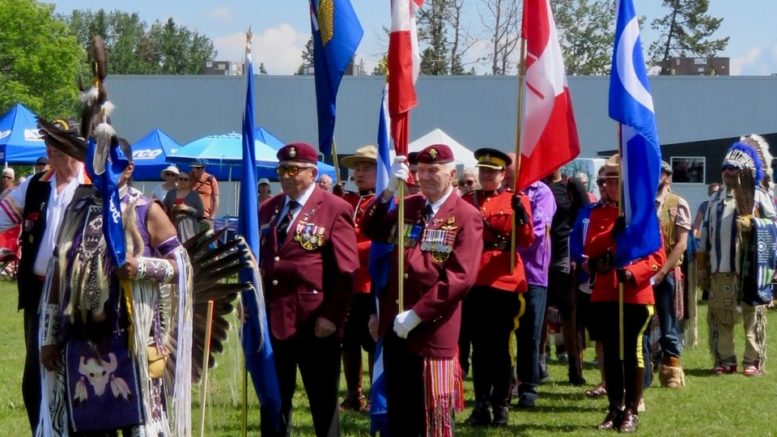 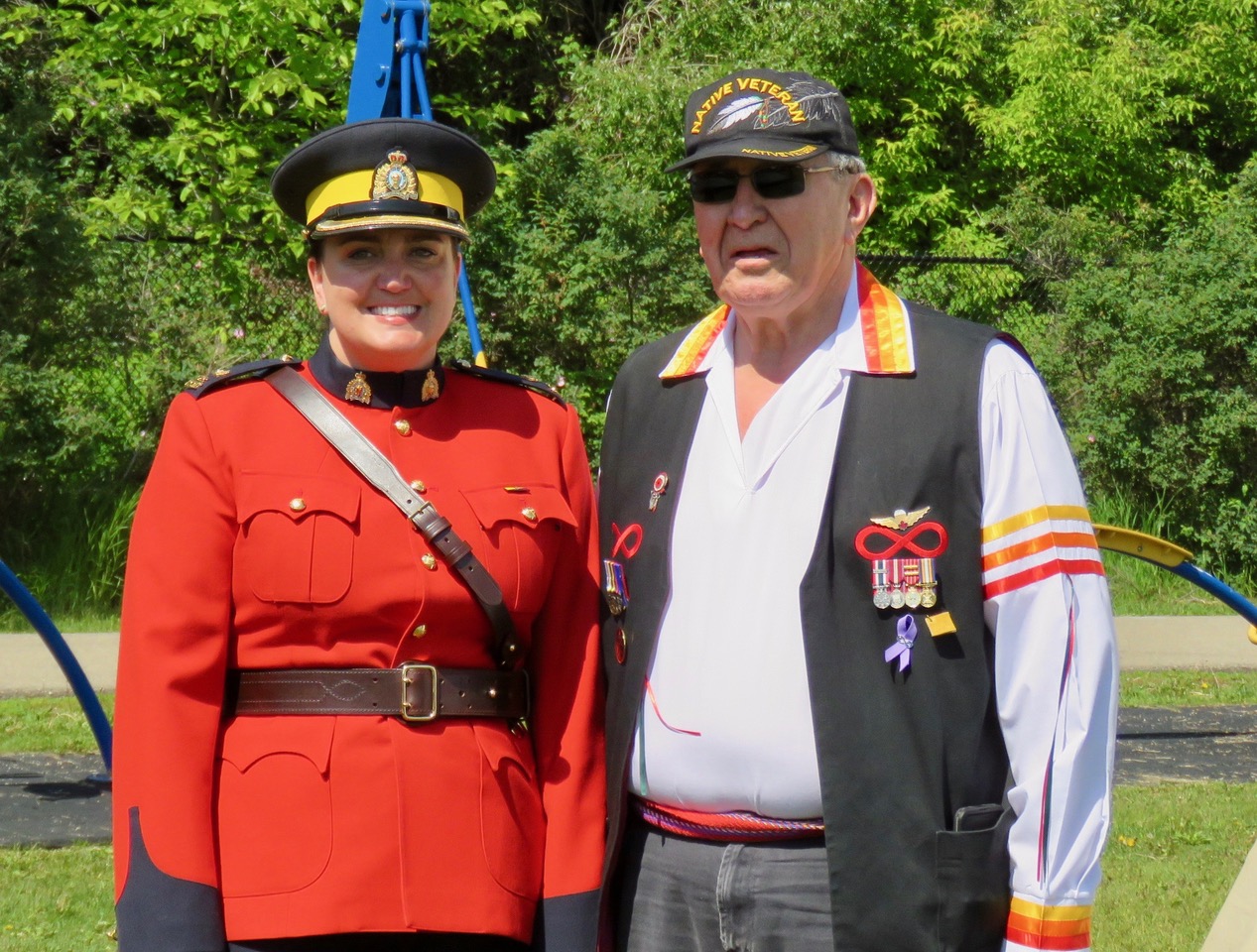 (ANNews) – On Sunday, June 23, St. Albert’s Lions Park was once again filled with National Indigenous Peoples Day (NIPD) celebrants, marchers and supporters who’d gathered to take part in the city’s tenth annual event. About 100 marchers arrived at the venue before the 11 a.m. start time and participated in a round-trip march from the park to the St. Albert Healing Garden to honour the more than 1200 Indigenous women and girls who have been murdered or have gone missing in Canada during the past three and a half decades.

The 40-minute march was first organized in 2018 by Paul Kane High School students Hannah Nash and Anwyn Neraasen. Nash, a member of St. Albert’s National Aboriginal Day committee and the Youth Advocate for the Métis Nation of Alberta, said the march was organized “because we want to bring more attention to the plight of Indigenous women, more attention to the systemic issues that lead to these tragedies, and to honour the missing and murdered women and girls who have already become victims of violence.” 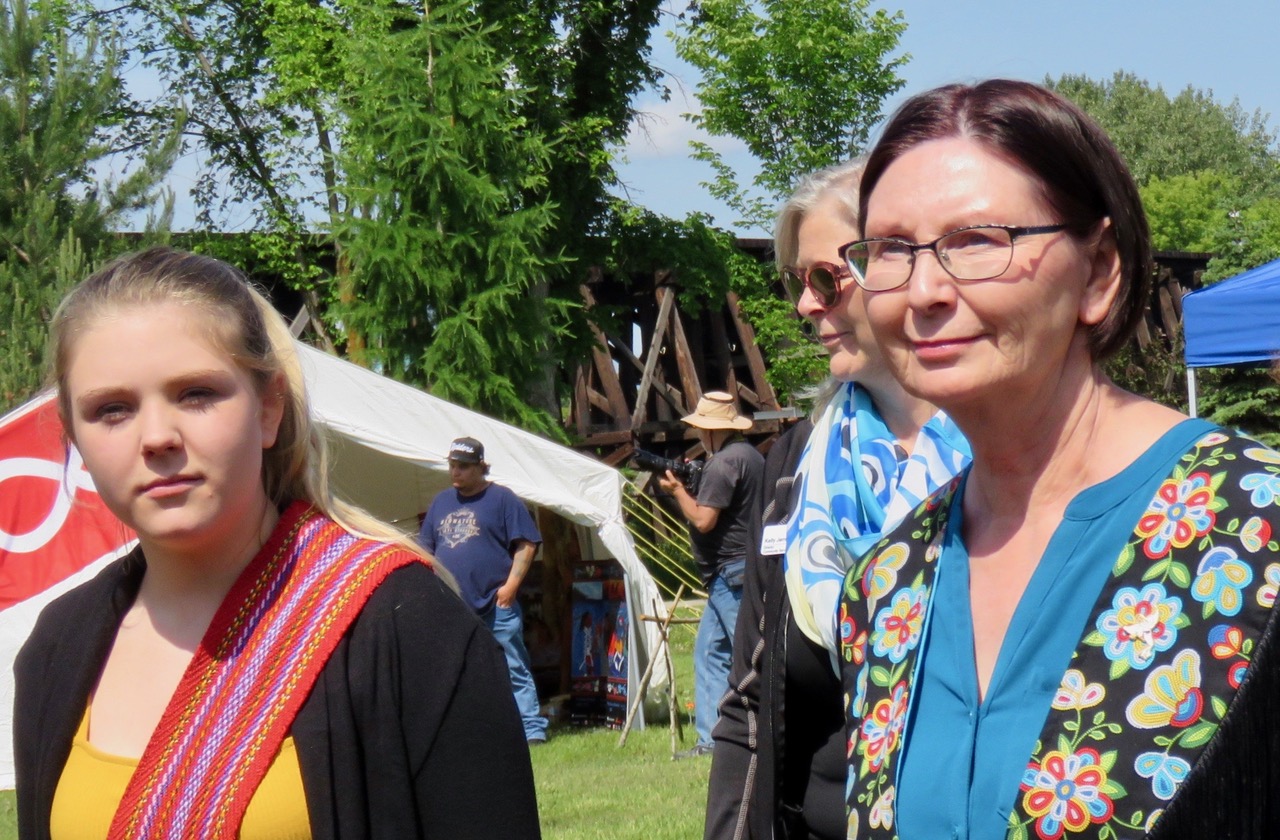 “We had a very good turnout for the march again this year,” noted event organizer and St. Albert NAD Committee Chair Gwen Crouse. “The subject of missing and murdered Indigenous women is a serious one; we do highlight the positives on National Indigenous Peoples Day, but we must also address issues that need more attention from both government and society as a whole. I am very pleased to see that so many people have once again joined with us to celebrate our National Indigenous Day celebration.”

The otherwise joyous celebration paused for a heartfelt moment of reflection when Crouse took to the podium to talk about the annual event and the loss of its long-time emcee and supporter, 67 year old Métis Elder Tom Ghostkeeper, who passed away on May 14 after a long battle with kidney disease. Tom is survived by his wife Martha, two daughters, 13 grandchildren, and 3 great-grandchildren. Tom had been participating in the St. Albert National Indigenous Peoples Day celebrations since its launch in 2009.

Elder Tom Ghostkeeper passed away last month_ his wife Martha was presented with an honour blanket in his name.

Addressing the crowd in her Cree language, Gwen Crouse thanked the large gathering for their attendance and participation, noting that “National Indigenous Peoples Day is about sharing our culture and we hope that you will enjoy the ways in which we will be doing it. I’d like to give a special thanks to our sponsors – Heritage Canada, Alberta Culture, the City of St. Albert, our public library, ATCO, the TD Bank, and our Elder Tony Arcand who guided us through the creation of the Healing Garden. Without this support, we wouldn’t be able to host this important annual event. Have a great day and please enjoy this unique experience.” 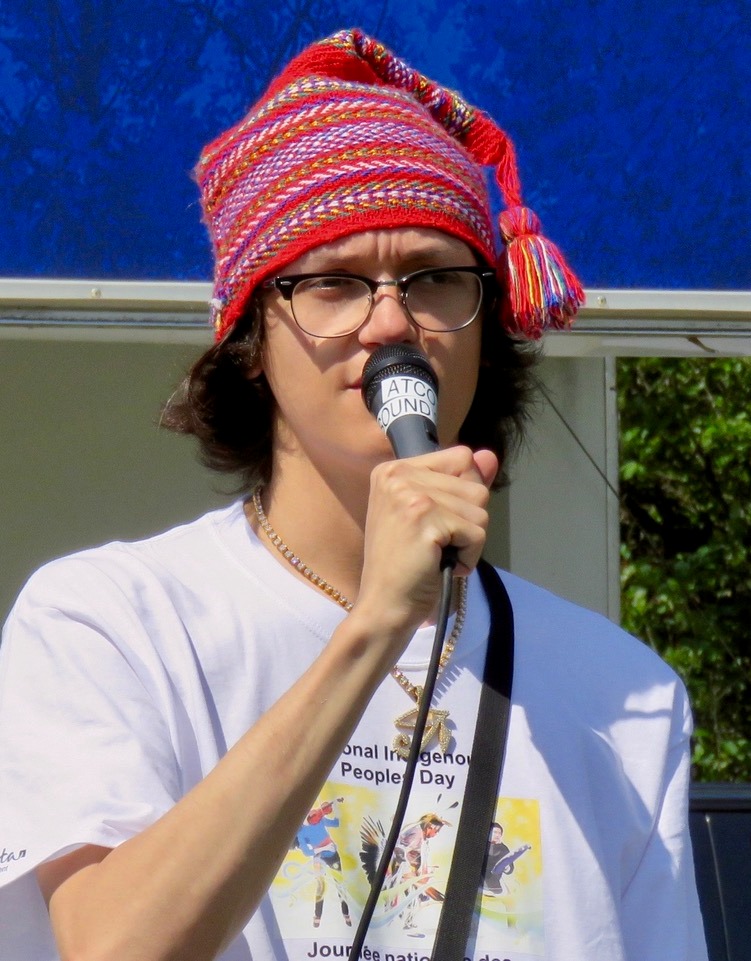 Despite several days of inclement weather and a forecast that threatened potential rain, the attendance was notably large and the half hour of cloud and few minutes of rain that fell on the crowd of onlookers failed to put a damper on St. Albert’s NIPD event. The gathering heard from several guest speakers and enjoyed a line-up of entertainers that included First Nations dancers, Inuit Throat Singers, the Métis Child and Family Society Jiggers, Alfie (fiddle) and Byron (guitar) Myhre, keyboardist Jared Sowan, country singers Michael Ferguson, Andy and Lisa Quintal, vocalist Paulina Kuznetsov, Pookie Gauthier and others.

The Grand Entry got underway at noon when a lineup of celebrants, led by First Nation and Métis veterans, Elders, RCMP members and Eagle and Staff Carriers made its way around the large field before stopping in front of the main stage. Carolyn MacDonald sang O Canada, in Cree, French and English, moments before emcee Luc Gauthier introduced host drum, River Cree Singers, who performed an honour song in remembrance of Tom Ghostkeeper, whose community and cultural commitments will never be forgotten. 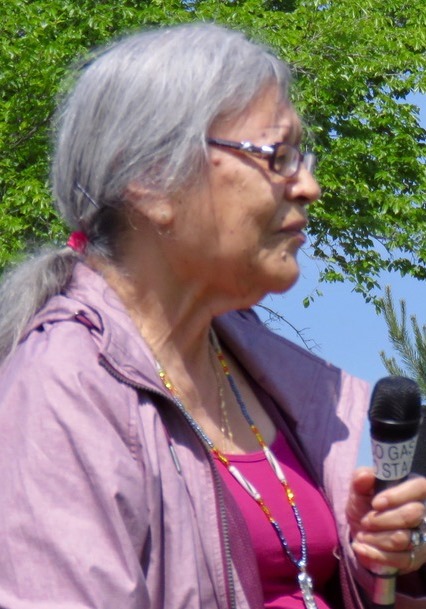 Elder Margaret Cardinal delivered the opening prayer and spoke to those in attendance about the importance of the special day, noting that though she would be offering the prayer in her Cree language, she wanted everyone to pray because: “we are all here to celebrate together, to pray together and when we do, we make the energy in here so very strong and clear.”

Elder Don Langford, Executive Director of Métis Child and Family Services, the co-host of the Indigenous Peoples Day event, was the first guest speaker to address the gathering. He praised the volunteers who helped to make the event a successful one for all who came out to celebrate the day and thanked the many marchers who made the 40-minute walk in honour of Canada’s missing and murdered Indigenous women and girls.

“We are very honoured and happy to be here in St. Albert today – the home of Alberta’s Métis,” noted Langford. “I want to take this moment to ask the Creator to look after our children and our families and to help us all enjoy this celebration of culture, heritage and diversity.”

Métis Nation of Alberta Provincial Vice President Dan Cardinal was introduced to the podium, where he “acknowledged that we are on Treaty 6 territory, also the homeland of the Métis,” before lauding the words of Elder Cardinal and paying respect to the memory of Tom Ghostkeeper.

“I am so happy today that I speak Cree,” he noted, “because this is after all, the Year of Indigenous Languages. Welcome one and all to this National Indigenous Peoples Day event.” 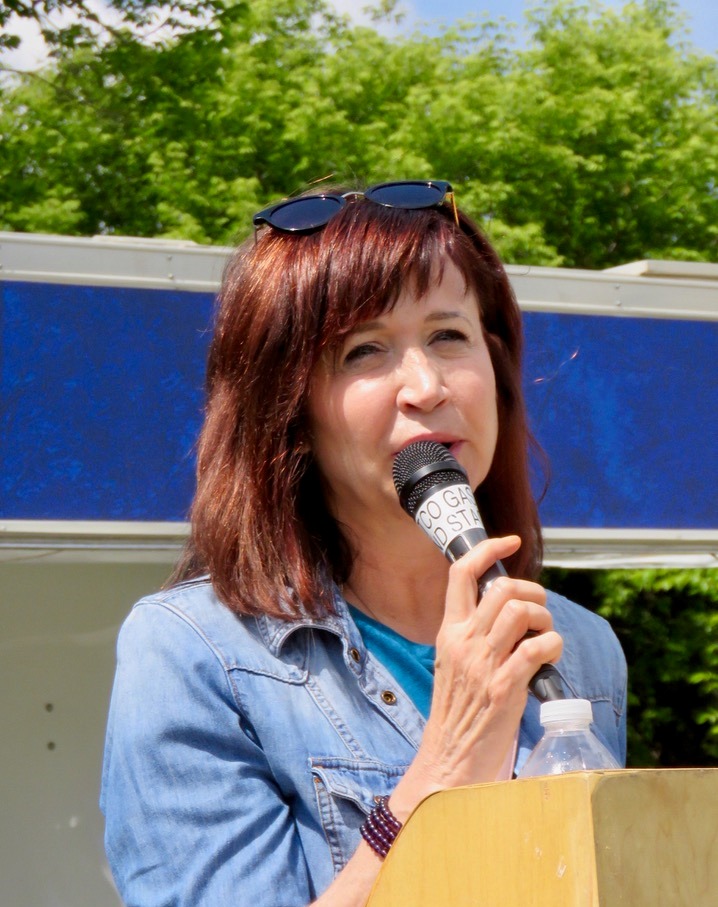 St. Albert MLA Marie Renaud thanked Elder Cardinal for her prayer and told the audience that “her words are an important reminder that unconditional love is the answer and that we have much work to do around recognizing truth and working toward reconciliation.”

“On this day we celebrate the First Nations, Métis and Inuit but the summer solstice is also the beginning of something called Celebrate Canada Day. It is great to see so many volunteers participating here today – thanks to the many of you here today who have traveled far to join us in celebration. This event has been going on in St. Albert for 10 years so it’s actually a celebration day and I call for a round of applause for all the organizers. 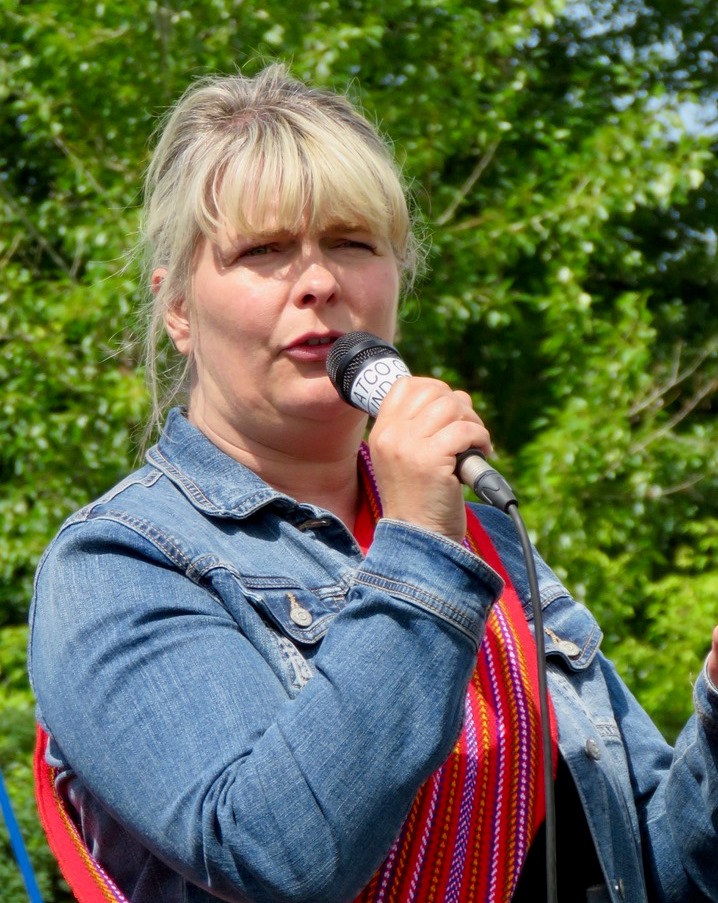 “An hour ago, the marchers walked to City Hall where we hoisted the Métis flag; it will fly there for half the week and then we will raise the Treaty 6 flag for the second half of the week. As a city we are publicly announcing our support and our inclusion and as a council we are very proud to note that we have added the Métis flag and the Treaty 6 flag as permanent additions to our council chambers so every time we walk in the chamber we are reminded about the land we stand on.”

Heron said she’d like to “rewrite our land agreement” and to do so “we need help from this community so we get the right words to acknowledge Treaty 6 land; it is important that we understand who we are every time we stand in front of you.” 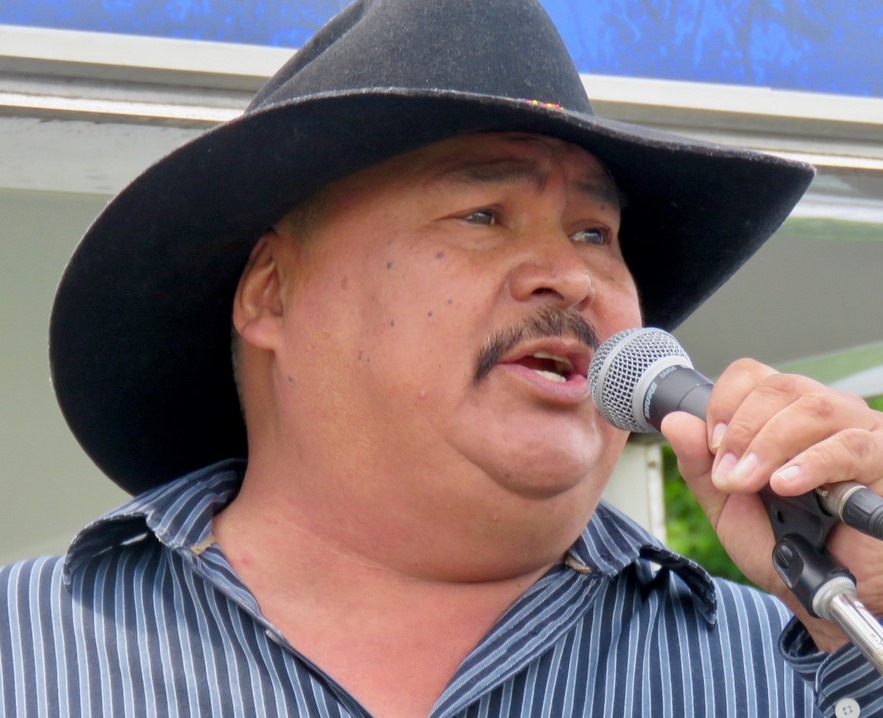 National Aboriginal Week sees many local, regional and provincial organizations, agencies and communities take the time and make the effort to join Canadians from coast to coast to celebrate Aboriginal culture and tradition and to reflect and remember the important role that Indigenous Canadians have played in Canada’s history. Initiated in 1996 by then-Governor General Romeo Leblanc, National Aboriginal Day (renamed National Indigenous Peoples Day) falls on the summer solstice, the longest day of the year and a time when Aboriginal peoples traditionally gathered to share, trade, celebrate and reunite with loved ones. When the day was introduced, the message was clear that “all Canadians are encouraged to participate” in the many festivities, and to “celebrate the values, traditions and cultures” of Canada’s First Nation, Métis and Inuit peoples. 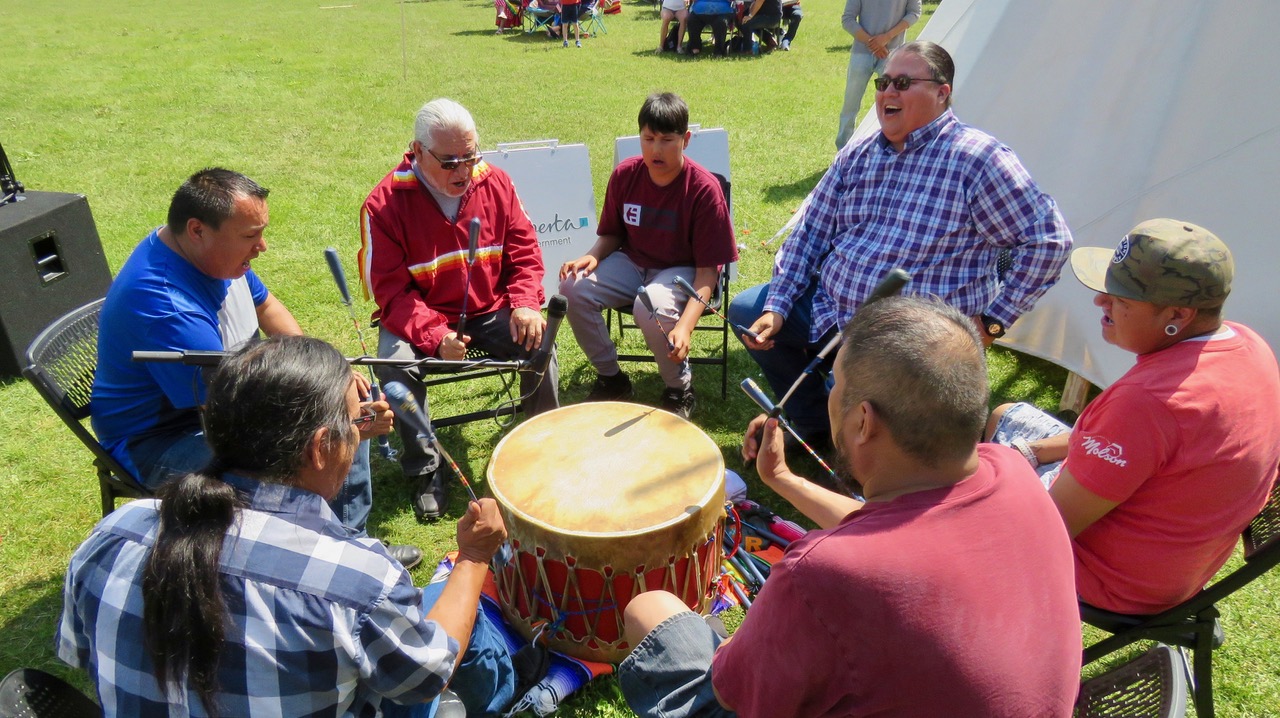 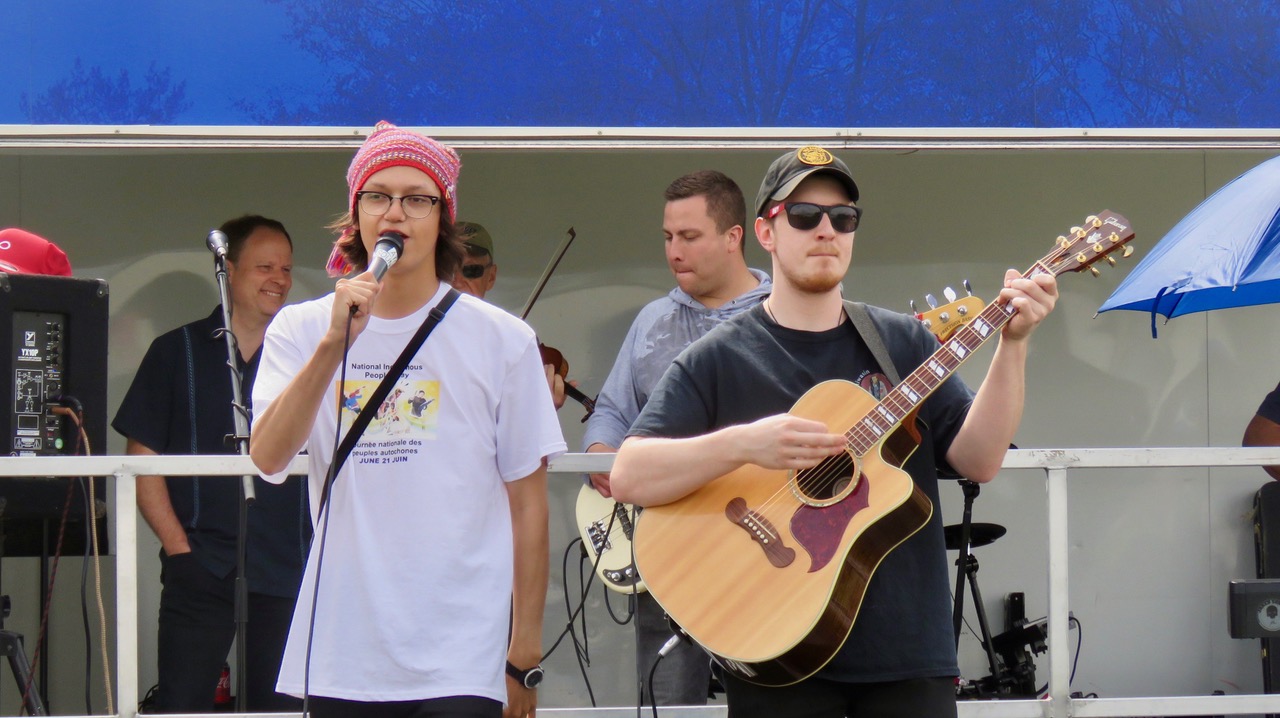 The Luke and Conner show wrapped up a first-rate NAD event in St. Albert’s Lion’s Park on June 23, 2019.

Happy National Indigenous Peoples Day from the Government of Canada

Be the first to comment on "St. Albert honours MMIW before celebrating National Indigenous Peoples Day"