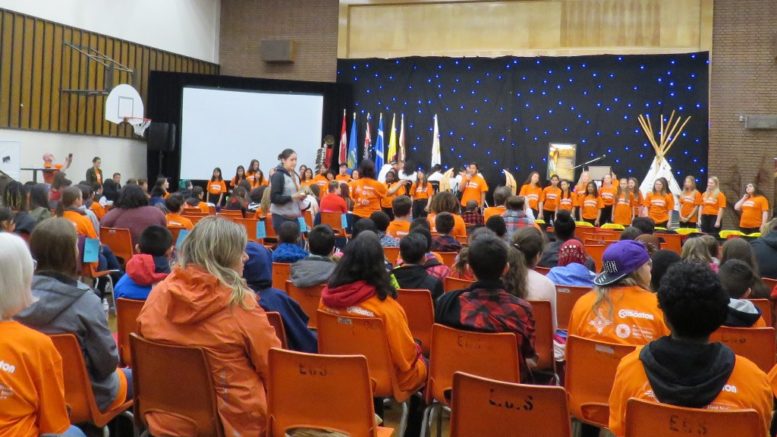 On June 7, students gathered from Edmonton Public and Edmonton Catholic School Divisions to participate in the 2019 Reconciliation Walk.

(Edmonton) – ‘Reconciliation’ should be a word at the forefront of every Canadian’s consciousness – but nowhere is this focus on understanding more important than within elementary and secondary education.  As today’s youngsters become tomorrow’s politicians, policy makers, teachers, civil servants, business-owners, professionals, laborers, tradespeople, and global citizens, the nation strives to acknowledge the overdue necessity of promoting greater awareness and understanding.

Over 150 young people, of varying ages, were greeted by masters of ceremonies Nadya Bigstone and Skyler Gladue with warm words and traditional salutations.  Student drumming group Nehiyaw Pimatisiwin seized the audience’s attention with an honoring song that reverberated within the cores of all those present, while a procession of flag-bearers marched ceremoniously down the aisle.  Following a Cree prayer by Elder Betty Letendre, and a moving Treaty 6 acknowledgment by Joshua Fetter, selected students took turns approaching the microphone to elaborate upon their individual understandings of what ‘reconciliation’ really means.

As speakers addressed a blur of bright orange t-shirts sported by attendees, it was explained that 2019 has been proclaimed the year of Indigenous languages by the United Nations.  This seemed to resonate with students, as they had clearly begun to reflect upon their own langue-based conceptualizations of ‘self.’

In their own words, students equated connotations of reconciliation with cultural identity, and in turn, Canadian cultural identity with a need for Indigenous language learning and preservation.  Others focused on their hopes for greater respect within the education system surrounding Indigenous topics, while still others found the concepts of harmony and unity to be at the core of the terms ‘reconciliation.’

Notable to onlookers was that these meaningful observations were being shared by youth representing both Indigenous and non-Indigenous communities.  Also striking, as the youngsters spoke, was how articulate they were.  Perhaps a bit inhibited by the prospect of large-scale public speaking, many were visibly nervous, but their ideas were expressed with such touching elegance and conviction that it was difficult not to imagine a future of respect and increased understanding – one could not help but think that perhaps society could glean greater perspective and insight about reconciliation from these kids.

The event was the inspired realization of a vision shared by many collaborators, all of whom should be recognized for their work in cultivating lasting and meaningful educational experiences.  In a celebration of this cooperative effort a video montage created for the occasion was screened for those in attendance.  Students modeled the ideals of unity and teamwork with a moving performance of “We Are Canada” sung by the Monsignor Fee Otterson Glee Club and the accompanying beats of Nehiyaw Pimatisiwin.  The catchy tune left attendees humming as they gathered their belongings and suited up for a drenching walk to Victoria School of the Arts.

Accompanied by Elders and prominent community members, students trudged through Downtown Edmonton’s sizable puddles, while others opted to pile into big yellow school buses to escape the rain.  Upon arrival at Edmonton’s Victoria School of the Arts (part of EPSB), there was yet another ceremony held to mark the occasion with the handing down of proclamations by Edmonton City Council and the Mayor.

As awareness increases, and Edmonton’s elementary and secondary students become more literate in Indigenous culture and history, there is the optimistic potential for gradual healing – and perhaps, ultimately, reconciliation.  This walk signified the fourth of its kind, and will no doubt grow in attendance and public engagement next year.