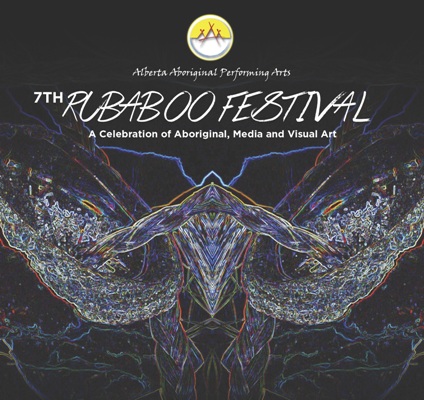 Edmonton, AB  – The Rubaboo Arts Festival is committed to redressing the erasure of culture and moving us in understanding and inclusion. This 12 day festival showcases Aboriginal theatre, music, dance, art, food, family events and artist workshops. Rubaboo is a Métis-Michif word (mixture of French and Indigenous), for a stew made on the trap line of whatever was left in the food stores. It’s a philosophy about what sustains us; and feeds the spirit.

“This festival is open to everyone, and at its root is the philosophy that art is powerful medicine,” says Christine Sokaymoh Frederick, Artistic Director of Alberta Aboriginal Arts. “Our 7th Rubaboo honours the growth of all our relationships, as well as the completion of ceremonies and cycles within our culture.”

Rubaboo opens with “HUFF”, by Indigenous award-winning playwright Cliff Cardinal – one of the most exciting new voices in Canadian theatre. This Native Earth production tells the wrenching, yet darkly comic tale of Wind and his brothers, caught in a torrent of solvent abuse and struggling to cope with the death of their mother. DETAILS: Jan 27 to 30 at 7:30pm | Jan 30 Matinee at 2pm | Stanley Milner Library Theatre | TIX $25, $15 for Elders & Youth | TIX on the Square and At The Door

“Fire Song” by Adam Garnet Jones is one of the first films by an Aboriginal director to deal with two-spirited people. This thoughtful and moving story is about a young Anishinaabe man who is forced to choose between staying in his community or exploring the expanded possibilities of the world outside. DETAILS: Feb 2 at 8pm | La Cité Francophone | TIX $10 | TIX on the Square and At The Door

Be the first to comment on "Rubaboo Aboriginal Arts Festival comes to Edmonton: Jan. 27-Feb. 6"