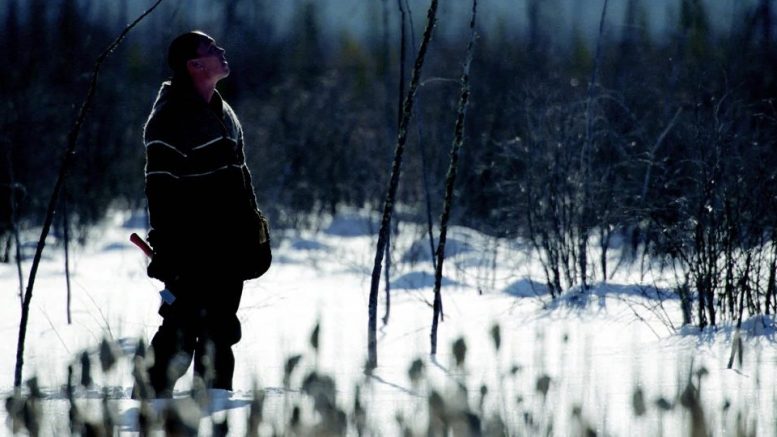 Three Feathers, directed by Carla Ulrich, based on the graphic novel by Richard Van Camp will be screened at 7 pm on Sunday April 28 at the Metro Cinema in Edmonton as part of Dreamspeakers Film Festival.

(Edmonton) – Dreamspeakers International Film Festival is celebrating its 25th anniversary in Edmonton from April 26 to May 7 and it is showcasing an exciting lineup of Indigenous films at Metro Cinema (in Garneau Theatre 8712 – 109 Street). Presented in tandem with the 10th anniversary of Rababoo Festival of the Arts, this festival features an unprecedented array of extraordinary artists and their work, across multiple disciplines. Click here for the full schedule of events.

Dreamspeakers presents and celebrates local, national, and international Indigenous innovation in film. Based in Allard Hall and other venues, Rubaboo is committed to developing and presenting new artistic works by cutting-edge Indigenous artists.

The award-winning Falls Around Her starring Tantoo Cardinal and directed by Darlene Naponse is the closing feature film for Saturday April 27, 2019. Cardinal has received rave reviews for her portrayal of Mary, a legendary singer who returns home to her northern reserve to reconnect with the land. View the trailer here.

Indigenous youth interested in film can participate in Dreamspeakers’ Youth Day on May 2 at Allard Hall which includes a free Talent Search with L.A. casting director Rene Haynes – who specializes in Indigenous projects, including Canadian features Rhymes for Young Ghouls, Indian Horse and the upcoming Blood Quantum and Night Raiders.

11:30 am – Okichitaw – Refeathering the Warrior (directed by Meegwun Fairbrother. Run time 55 min.) A journey of empowerment for students who rediscover the Plains Cree martial art Okichitaw, a gift of their indigenous culture and traditional teachings.

1:15 pm – Sembradoras De Vida: Mothers of the Land (directed by Alvara & Diego Sarmiento. Run Time 74 min.). Mothers of the Land (Peru, with English subtitles) follows five women from the Andean highlands in their daily struggle to maintain a traditional way of working the land. View the trailer here: https://vimeo.com/304046026

2:45 pm – Three films are featured at 2:45 pm: The Crossing, a 5 min animated short directed by Chris Shaw, which follows hundreds of Tibetans as they make a perilous journey across the Himalayans into India – to flee persecution in their homeland which is occupied by China.

Winayoacha: Eternity, an award winning 87 min feature film with English subtitles, that features stunning cinematography, directed by Oscar Catacora. It is filmed in the Aymara language and tells a moving story about the sun and the moon that will touch your heart and soul. View the trailer here.

Esperanza Del Oriente: Hope of the East, a short film, directed by Patricia Albornoz with English subtitles, that follows a boat sailing from Riberalta to provide medical care for the Indigenous villagers of Portachuelo.

7 pm – Three Feathers – directed by Carla Ulrich, based on the graphic novel by Richard Van Camp.  When harm is done, justice must heal.  After committing a shocking crime three young boys are sent to live on the land for 9 months to explore the power of restorative justice, and acquire the humility needed to return home and face their past. Run time 44 min. Watch the trailer here.

10 pm – two short films will be screened: Just one Word (directed by Jani Lauzon. Run time 12 min.) tells the story of a successful Metis lawyer surrounded by luxury who seeks to right the wrongs in her community and family. Moa Me Le Pinko: Chicken and Bingo, directed by Amberly Jo Aumua, Courtney Montour and Jesse Littlebird, that tells the story of two random strangers at a cemetery who form an unlikely connection sharing stories and memories. Run time 7 min.

The schedule for April 29 and 30 will be posted here tomorrow.

For ticket information and a full schedule visit dreamspeakers.org.

Some upcoming highlights of the Rubaboo Festival at Allard Hall (1110 – 104 Ave NW Edmonton) are:

Kaahsinnoniks, in Blackfoot loosely translates to ancestors, and this performance gives us a paradigm to explore events of the past, present and future, because for us, everything is integrated.

Get inspired and learn how to make memes with @dadfights.

Blood, Water, Earth is a ritual, an embodied incantation, traversing sacred alignment from cosmos to womb to whenua. Weaving performance, video and music/song, it channels the ancestral, elemental and the dream world.

Body Sovereignty with Virago Nation and Iskotew Iskwewak – Sat May 4 at 8:30pm at Allard Hall

Tying in body, land and food sovereignty, traditional tattoo artists will gather in Amiskwaciwâskahikan. Tattooing will happen. Everyone will be fed.

Join us for our Anniversary Gala to celebrate with films and artists!

‘Indian Horse’ returns to Edmonton at Metro Cinema at the Garneau: June 1 & 2