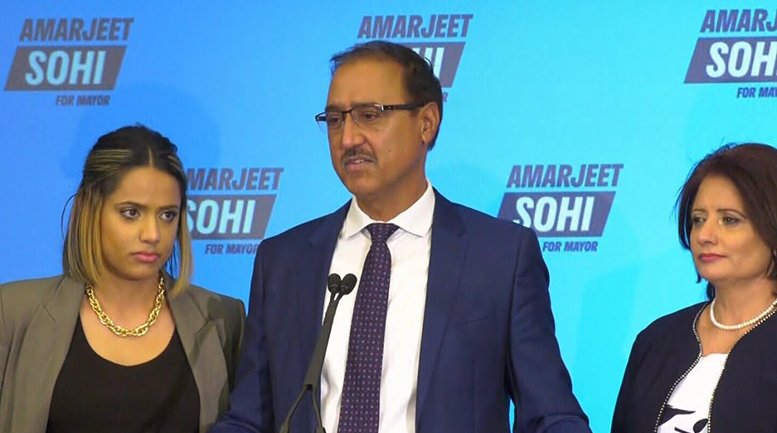 (ANNews) – On October 18, 2021, the municipal citizens across Alberta chose a renewed approach to how they would like to be governed on a local level. In Edmonton, there was a resounding call to a refreshed approach. By electing former councillor Amarjeet Sohi to the Mayor’s chair, and ushering in the City’s first mayor of South Asian descent, Edmonton has taken a huge step forward to reflecting the true nature of the city.

Of the incumbent councillors running, only four were able to gain a seat, with the remaining eight positions being filled by new faces. Additionally, the representation of elected women ballooned from two positions to eight, with 75% of City Council now being composed of women. Something that advocate and out-going councillor Bev Esslinger identified as a lingering issue in Edmonton politics.

This shift in representation will undoubtedly have a profound impact on how issues are discussed at City Hall, and may also reflect a desire by Edmontonians to shift away from the politics of the past. Notably, this push for diversity on council can also be interpreted as an affront to the polarizing politicking that certain unsuccessful candidates chose to employ.

Hot button topics like crime and disorder seem to have fallen flat at the ballot box, but as work gets underway, marginalized people within the City eagerly await positive movement. Much has been done in the years previous, however there is much more needed, and numbers only continue to rise.

Edmonton has long been recognized as the second largest urban Indigenous population in the country with numbers climbing closer to 10% each year. These numbers reflect less of a special interest group, and more of a vital aspect of Edmonton’s base.

The important role that Indigenous people have played in regards to Edmonton and its history has been highlighted many times by former Mayor Don Iveson. These contributions can be seen in attractions like the Indigenous Peoples Experience at Fort Edmonton Park and many other amenities. However, these projects do not seem to be impacting the over-representation of Indigenous people on the streets and in the justice system.

In apparent recognition of these difficult truths, Mayor-elect Sohi’s campaign platform called for A Path to Reconciliation and Right Relations. Upon examination, the platform commits to some tangible actions like the establishment of a Reconciliation Council, supporting communities searching for unmarked graves, creating an Elders Council and publishing a four year plan/report. Much of the intended work mobilizes city staff to implement the Truth and Reconciliation Commissions (TRC) Calls to Action and report back to the community.

Some of the proposed activities echo previous initiatives that have since been shuttered, such as the Edmonton Aboriginal Urban Affairs Committee (EAUAC) repealed in 2017 and the ill-fated organization Wicihitowin. Meanwhile, additional pledges to amplify the work of the Indigenous Relations Office and incorporate the United Nations Declaration on the Rights of Indigenous Peoples (UNDRIP) may be welcomed by the Indigenous communities.

Overall, how well the newly elected City Council cooperates on Indigenous issues remains to be seen. In the lead up to the election, local news outlet Taproot Edmonton undertook an intensive survey and comparison project to inform electors. One question in particular focused on the issue of truth and reconciliation. In their responses, the anticipated council appears split between the opinions of the City doing enough and more can be done.

In any event, it appears that the City of Edmonton is poised for an amplification of Indigenous issues. Like many other governments and institutions, the difficulty often lies in moving beyond the performative actions, and engaging in meaningful actions.

There is little doubt that the City of Edmonton has the foundation upon which the work can continue with its various Memorandums of Collaboration and Dialogue (MOCD) between Treaty No. 6, the Metis Nation of Alberta, Enoch Cree Nation and Kehewin Cree Nation, the problem often is whether the initiatives are properly resourced and guided.

Be the first to comment on "Indigenous Expectations in Edmonton"