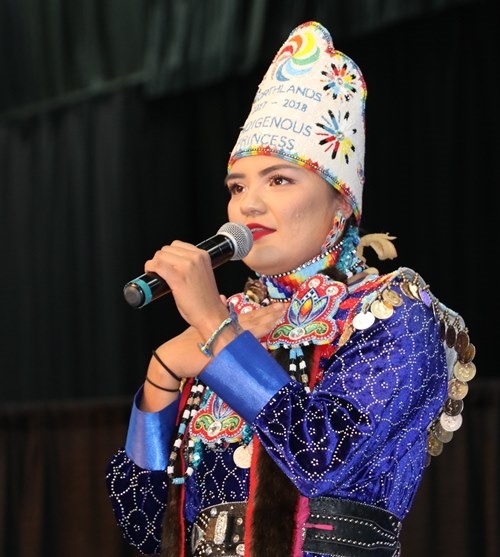 (ANNews) – K-Days 2018 took place from July 22-29 this year and featured the annual K-Days Pow Wow, a three-day competition powwow that once again drew more than 700 dancers and thousands of spectators. In past years the powwow was accompanied by a Northlands Indigenous Princess Pageant, but the 2018 K-Days celebration did not include the pageant.

“I’m not sure what happened or why it was cancelled,” noted the 2017 Princess Pageant winner, Alicia Cardinal. “I was surprised and a bit disappointed that I couldn’t pass the crown to the new princess, but I had to turn it in and my reign is now complete.”

Cardinal, who received the crown last year from the pageant’s first winner, Brittney Pastion, is a member of the Buffalo Lake Métis Settlement near Caslan, Alberta.

“I am hopeful that the event will return again next year,” Cardinal said, adding: “I think they want to hold the pageant again, but I also believe they want it to have a professional touch and will seek outside help to ensure that they get it right.”

Cardinal said she really enjoyed her year; “it was a really good experience and it’s helped me learn and grow and appreciate my culture even more. I hope the pageant resumes next year because I know there’s a lot of interest and it was just starting to build. I had a lot of girls talk to me about the pageant and most them said they’d like to get involved with it. I think the powwow and the pageant are really important; K-Days is a very large event and it’s the perfect place to show our culture and educate the general public.”

During her reign, Cardinal participated in many functions.

“I was invited to the CFR Rodeo; I visited many schools where I addressed the children. I participated in numerous photo-shoots, round dances, helped to make videos and so much more. The year went by very fast, probably because I am still in school and doing what I can to encourage Indigenous girls to consider their futures and to make education a priority.”

Alicia said she didn’t know that the pageant would not run this year until the K-Days celebration was about to get underway, but noted that she did have some doubts, especially when she didn’t see any of the information videos she’d made promoting the pageant appear on TV.

“We made a couple of info-style videos earlier this spring and in them I spoke about the pageant and encouraged Treaty Six girls to get involved and to put their names up as contestants. It took quite a bit of time and energy to put the videos together, so I was surprised when I didn’t get any feedback from the community. A second video encouraged the communities to come out and participate in the powwow.”

Now that her one-year reign is over, Alicia said she has a few ideas on how the event can be improved. She said that soliciting help from other pageant producers, such as those who host the Miss and Mrs. Indigenous Canada pageants, could help the program attract more participants.

“I’d also like to see other First Nations in Treaty 6 take up the call and get more involved in this important event. There’s a rather large cost-factor when it comes to hosting the Pow Wow and the Northlands Indigenous Princess Pageant and so far the onus has been on just one band. We have more than 40 Treaty 6 communities and if they all get together to take turns then all of the communities would be better informed and better prepared.”

In closing, Cardinal said, “I really enjoyed my special moment at K-Days this year when the women brought me the purple shawl and I danced for the crowd. It helped to symbolize what I am really interested in – mental health. It helped me a lot because just days before I entered the contest last year my father passed away. If I can help even one family and bring awareness to others by sharing my experiences in overcoming the intergenerational trauma of the Residential Schools, then I will have accomplished another one of my goals.”

She noted, “During this past year the experience I gained as Northlands Princess was an honour for me. It was a wonderful and activity-filled year that has given me an opportunity to travel, meet new people and grow as a person.”

In the meantime, Cardinal is currently working to fulfil yet another goal; she is enrolled in the Education program at the University of Alberta.

“I’ve always wanted to be a teacher; it’s my childhood dream,” she smiled. “I hope that in the future I will be able to make a positive difference in the lives of the children I will be teaching.”