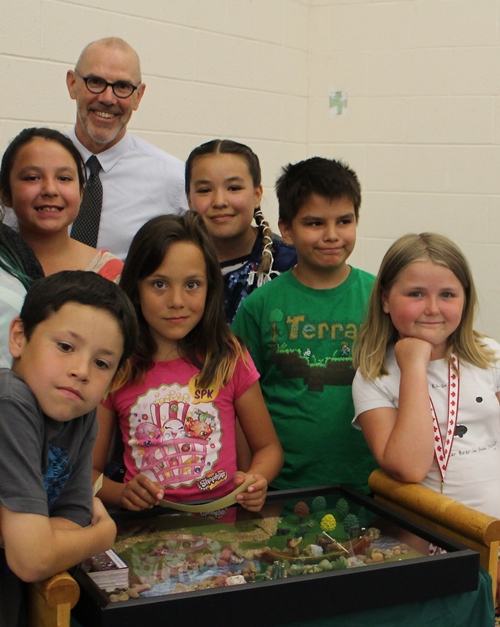 (ANNews) – What lies in store for the 2016-17 students, many of whom are Aboriginal, at Belvedere Elementary School, part of the Edmonton Public School Board in northeast Edmonton?

At the beginning of last year, the school principal, James Cottrell, was struck by an idea. It centered around the fact that there’s recently been a lot of attention on ‘reconciliation,’ especially in relation to Indian residential school survivors.

And so, with the aid of educational assistant, Lisa Arnston, he got together a group of upper elementary students and created the Northern Eagles. Towards the conclusion of the 2015 -16 school year the staff and students who made up the Northern Eagles met as one, worked as one and came away with a much better idea about and empathy for the Aboriginal community, particularly in terms of Indian residential school history.

The Northern Eagles researched, discussed and listened to visiting survivors’ stories. By the time June of 2016 rolled around the group had grown – in knowledge, understanding, acceptance, respectfulness and reconciliation. 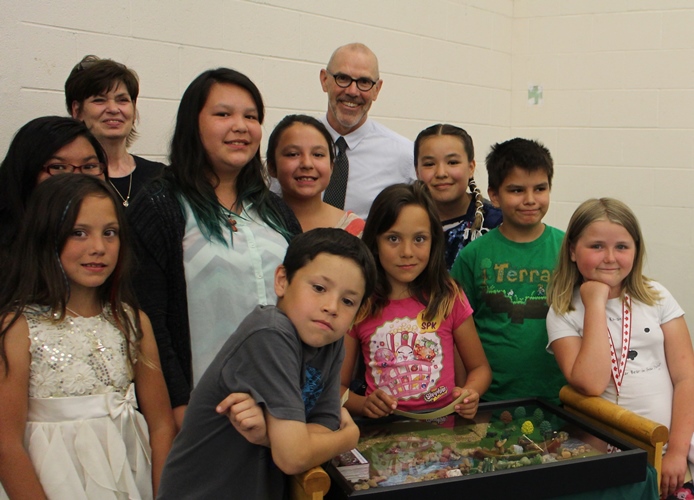 Indeed, Cottrell’s vision of choosing the federal government’s apology to Indian residential school survivors as a stepping stone and subject area for study managed to ignite the interest of the group. For the young students and school staff alike it opened up a whole new world of what the past life of Indian residential school survivors was like. With the help of Arnston, Cottrell and parents of students as well as community members such as Rick Lightning, Gordon Gladue, Jenna Weber (First Nation consultant), artist Mike Wells and others, the project progressed.

Students were excited with the undertaking and proud to be a part of it, especially in the planning and development stages and the creation of a shadowbox model that portrayed an Aboriginal village with a river running through it, a canoe on its waters, sweetgrass, sage, a tipi, drum and a sweat lodge. It truly sparked the interests of the students. They were very enthusiastic with the concept of the shadowbox, said Cottrell. “They created a vision of the story they would tell.”

But students were not only excited about the project and participated in its creation, they also learned while on that journey. As part of the project they learned money management because they had to purchase materials to create the objects for inclusion in the shadowbox. And, they felt “the power of buying stuff for it.”

They learned other things too. For example, the inclusion of a drum involved research about drums and they loved the teachings provided by outside speakers who visited the Northern Eagles at their group meetings. They also researched and learned about the “historic role the river played” in daily Aboriginal life.

Cottrell explained that he sees a lot of value in these programs and said he will most likely implement a similar one in the present school year. Over the past year, Cottrell witnessed his students’ “connection to their history, their exposure to real people affected by the apology and the connection the kids had with their own families.”

Elaborating on the government’s apology as a subject of study, Cottrell pointed out that, “It’s easy to put it (a copy of the apology) up (on a wall), but I saw it as an opportunity to introduce situations that are very current.”

It also opened doors for others to learn, understand and participate. It allowed other students, their families and other teachers “to look at how we respond to it and take ownership of it.”

His own teaching staff made “a commitment to use a Native theme,” Cottrell explained. “One teacher did a math project and it went over very well.”

Other schools, like M. E. Lazerte and Londonderry have connected with Jessica Sanderson, a Native liaison with the Edmonton Public Schools, to possibly adopt similar programming in their schools.

The interest is increasing. Ideally, others will follow suit and fire up similar initiatives that will further educate the public-at-large, as well as students and parents, and inspire them to learn and reconcile in producing a positive future in which Aboriginals and non-Aboriginals live, work and play – in harmony. It’s about nurturing and getting along together.

That said, one should not forget how and where it all started – for some at the grass roots level – with our younger generation of students, students in schools like Belvedere Elementary School.