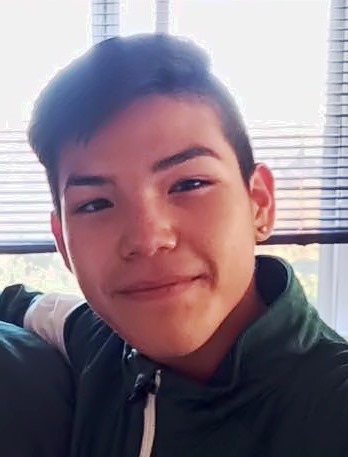 (ANNews) – Jodell Morin Strongman is a 14-year-old grade eight student who attends Bessie Nichols School in southwest Edmonton. He’s a tall, soft-spoken, intelligent young man with a quiet demeanour and a sense of self-assuredness. He’s a good student who struggles with math, finds science “very interesting,” gets “good grades” in language arts and is most interested in “social studies and athletics.”

Since early childhood Jodell and his twin brother Codell have been raised in part by their uncle, Guy Robert Morin and his husband, Stephen Haney. As the brothers grew older and began to form an idea of what lay ahead, it became obvious, noted Guy, “that they had different interests. Codell, for example, was never really into sports or athletics while Jodell enjoyed competition and has always been a very physically active kid.”

Jodell enjoys and is interested in carpentry, architecture and veterinary medicine. He isn’t just a good student, he’s also a pretty good athlete who has played volleyball, basketball and soccer, hefted the shot-put and ran in track and field events. But his passion is basketball, as was made obvious this year as a team member and captain of his school basketball team, the Bessie Nichols Nighthawks. 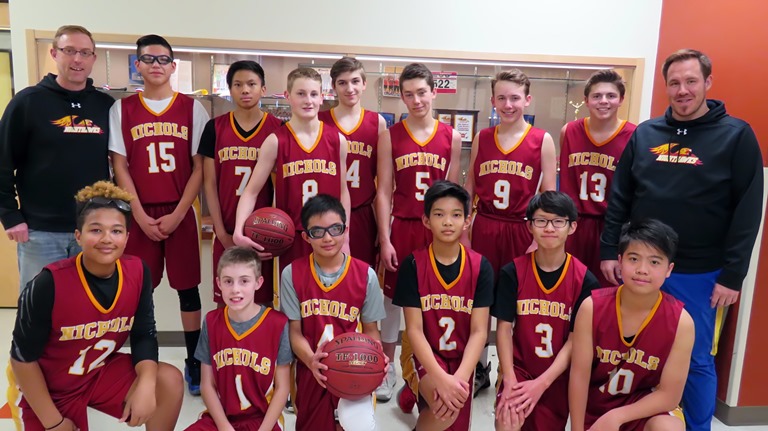 “I love basketball – it’s a great sport and one that I hope to continue to play throughout my school years,” smiled Jodell in an interview just before a game got underway at his school. “I am inspired by my favourite player, LeBron James and it is my intention to eventually play professionally, but first I plan to finish school and maybe one day play for the Ooks at NAIT or the Golden Bears at the University of Alberta. I am also interested in Native Studies and engineering and though I’m not sure what path life will lead me along, I do hope to make a career of these choices in the future.”

If he maintains his current pace and mindset, assured his uncle, Jodell will meet any goal he chooses for himself.

Basketball, noted Guy, has just about always been Jodell’s passion.

“He began following the sport soon after he started to come to the practices and games I would have with the various First Nation teams I coached,” he explained. “He’d practice with my players, and instantly took to the game. He was in Grade 5 while I was teaching in Calgary. I encouraged my sister to enroll him in basketball and she selected a community league team. The next year, Jodell lived with me and played ball with my school team, and it’s there that we saw something special start to unfold. His first year of junior high and his experience in community league play gave him a head-start and before long he really started to shine. Today he excels at the sport. As team captain, Jodell scored more than 325 points in just 13 games this year, quite an improvement from the 145 he earned last year.” 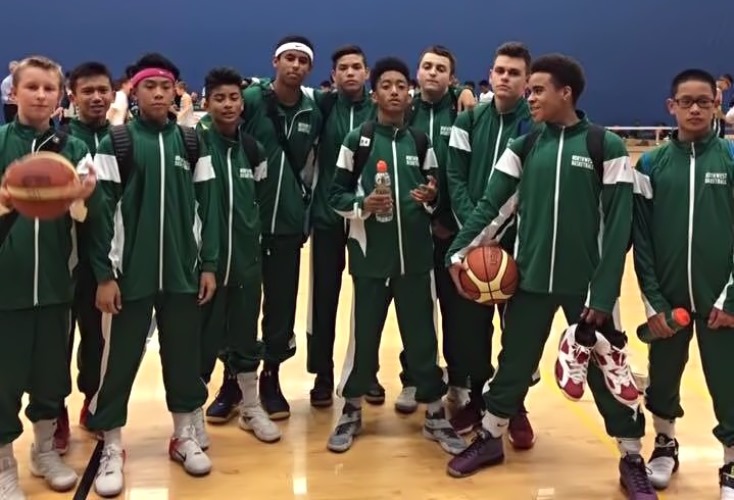 Jodell Morin Strongman, centre, is flanked by the 10 team members from his community league team.

Jodell’s passion for the sport is so great that he also plays for “Northwest,” a community league team that saw him score more than 140 points in 17 games this year, up 30 per cent from the previous season.

“Northwest won silver in the City Finals and took bronze in the Provincial Finals,” added Guy.

Guy Morin is both Jodell’s uncle and his godfather and he says that helping to raise the twins has made him a much better person than he ever knew he could be.

“The truth is, I’m a high-school dropout,” Guy admitted. “I’ve had my share of ups and downs, particularly throughout my early years, but being entrusted by my sister, who chose me as the child’s godfather, and asked me to help raise the boys, completely turned my life around. I am forever grateful that my baby sister saw something in me that I didn’t know was there. I am Jodell’s godfather, but without his dad in his life I took on the role as his father as that’s what he sees me as. I am there to guide him, mold him, be hard on him when I have to, but at the same time be his cheerleader and encourage him to succeed.” 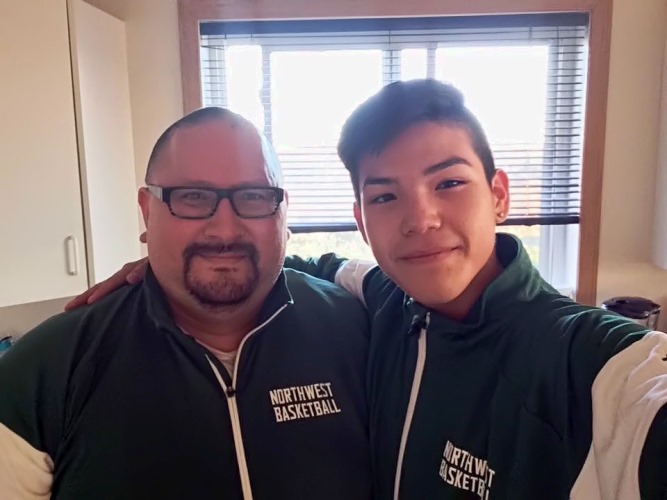 “It’s been a very positive experience for me,” assured Jodell, who credits his uncle for keeping him on the straight and narrow. “My uncle, I call him my dad because he supports me like a dad, encourages me and listens to me when I have concerns or need advice. He’s always made sure that I do my homework, reassures me when I have doubts and encourages me to lead a drug and alcohol-free life and to choose the right friends. It’s a great relationship and I feel that because of his leadership, I will succeed in life.”

It wasn’t long after accepting his responsibility with the children that Guy returned to school, upgraded his high school education and enrolled at the University of Alberta (UA), where he completed his Bachelor of Education degree.

Over the years, Guy’s been employed in several local schools, including St. Joseph’s and Mother Earth School. He’s also taught school on the Paul Band, at Maskwacis, on the Siksika Nation where he was vice-principal and on the Tsuu T’ina Nation near Calgary, where he took on the role as principal.

“I wanted to honour my mother’s wishes to do something that gives back to the community and I realized that working with and teaching kids in the communities would allow me to fulfil that goal,” noted Guy, who said the final decision to enrol at the UA came after a meeting with Edmonton Police officer Jim White.

“Everyone in the community looked up to him,” noted Guy, who once thought about pursuing a career in policing. “He told me that I’d have a lot of options, including policing, if I finished my education. He convinced me to stay in school and that’s a decision that I have never regretted.”

Jodell also intends to finish his education before he thinks too far ahead. In the meantime, he’s just grateful for having positive role models in his life, a family that encourages him and stands by him and focuses on the positives rather than the negatives.

“I have great support at home,” Jodell said, “and a family that not only cares but that is proud of me and what I have accomplished so far. I try to think positive and stay away from negatives and I am very happy to have some great like-minded friends who also have plans to achieve positive goals and lead successful lives.”

Jodell Morin Strongman is taking advantage of his opportunities and he’s doing it with humility and grace. He likes working with his fellow students and he’s quick to share his ideas. He’s quickly becoming a positive role model at his school, in his community and on the basketball teams he plays for. Life is good when you work hard for it; congratulations Jodell!