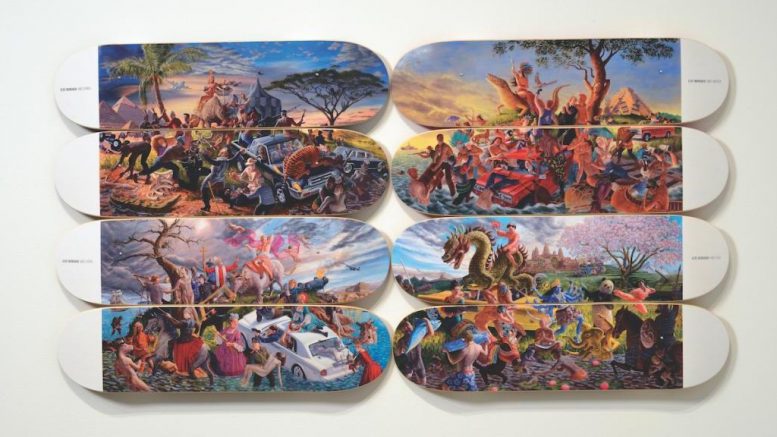 'Boarder X' features Indigenous artists intersecting culture, art and boards - at the Art Gallery of Alberta in Edmonton from January 26 - May 19, 2019. (photo from AGA)

(Edmonton) – The Art Gallery of Alberta will be featuring 2 new exhibits opening on January 26 until May 19, 2019 – Boarder X and Vernon Ah Kee’s cantchant.

Boarder X  brings together interdisciplinary contemporary art from artists of Indigenous nations across Canada who surf, skate, and snowboard. In this exhibition these practices are vehicles to challenge conformity and status quo, as well as demonstrate knowledge and performed relationships with the land.

Reading the urban terrain, making a cement jungle a playground, riding the natural contours of the white immovable mountains, or shredding the ever-changing waves: these are responses to the land. It is not about controlling land and water, but being humbled by their power. Beyond claiming space, the artwork recognizes human existence in relation to vast geographies and how we’ve thrived in those spaces. Surfing has a long history of Indigenous ways of being, originating from pre-contact Polynesian cultures. Skateboarding and snowboarding emerged in the 1960s and 80s respectively, which for a time were popular in subcultures resisting the mainstream.

Boarder X celebrates the intersection of culture, art, and boarding practices.  Its representation is interdisciplinary, consisting of painting, mixed media, carving, weaving, photography, performance, and video to reflect cultural, political, environmental, and social perspectives and critiques in relation to the territories we occupy.

This exhibition presents cultural thrivance and active presence – creating a space for engagement through art, culture, and boarding. It is an affirmation and transmission of cultural resilience and acknowledgement of ongoing respect and reverence for the land.

Boarder X  has been organized and circulated by the Winnipeg Art Gallery, curated by Jaimie Isaac.

Referencing the 2005 Cronulla race riots that took place near Sydney, Australia, cantchant provides a compelling statement on the racially motivated conflicts between white Australians and more recent, non-Western immigrants to the country.

Vernon Ah Kee transforms the irony of the riot chant “we grew here, you flew here” into the proclamation “we grew here”, which is reinforced by the suspended shields displaying Yidinji patterns and the colours of the Australian Aboriginal flag.

One must pass through the suspended “shield/boards” to view a video of professional Aboriginal surfer Dale Richards riding one of the boards. In the video, the surfboard becomes a metaphor for the Aboriginal body and the violence enacted upon Aboriginal peoples. At the exit, portraits of the artist and members of his extended family are revealed on the bottoms of the “shields/boards,” signifying continuing Aboriginal presence.

Cantchant is organized by the Art Gallery of Alberta and the National Gallery of Canada as a part of the [email protected] exhibition series.

The Art Gallery of Alberta has a prominent location in the heart of the Arts District in downtown Edmonton,  connecting  the Gallery and the community, welcoming visitors to experience art first hand. It is a world-class centre for the presentation of regional, national and international art, education and scholarship. The 85,000 sq. foot building, which opened in 2010, is itself a work of art that solidifies Alberta’s Capital as a world-class city. For information visit youraga.ca.