Known as the Professional Native Indian Artists Inc., the seven-member contingent challenged Canadian society to recognize, appreciate and accept Aboriginal art for exactly what it was – art. The result was an explosion of distinctive Aboriginal art renderings that laid the foundation for future decades of new, colourful and exciting Native artists and art works. The seven original members of the Group were honoured and their art pieces were curated and exhibited at both the Bearclaw Gallery and the Art Gallery of Alberta (AGA) which displayed magnificent originals and a few prints of the Canadian Native Indian Group of Seven. 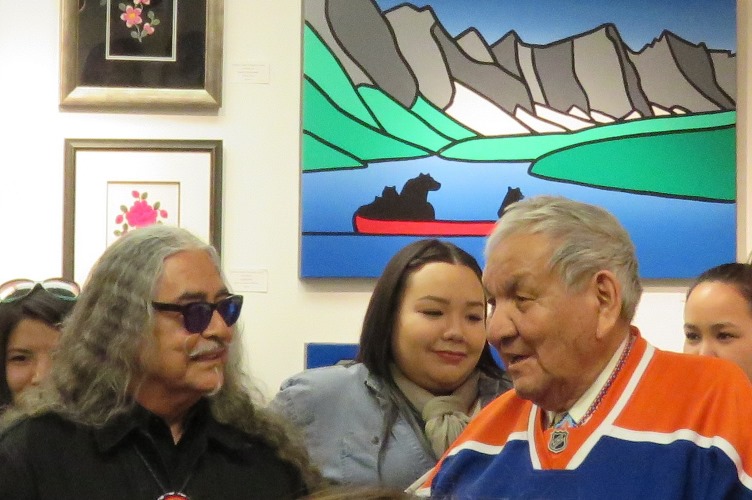 In addition to their appearances at the Art Gallery of Alberta, acclaimed artists Alex Janvier (proudly sporting an Edmonton Oilers jersey) and Joseph Sanchez were in attendance at the opening reception of an exhibit at the Bearclaw Gallery. Photo by Daniel Moser

On Thursday, March 3, Bearclaw Gallery owner Jackie Bugera was delighted to unveil a show and sale at an evening gala that included the presence of two of the remaining three surviving members of the original Group of Seven – the renowned Alex Janvier from the Cold Lake First Nation and Santa Fe resident, Joseph Sanchez.

Bearclaw staff member, Hope, saw the turnout response to the sale and exhibit as nothing short of “spectacular.”

The duo – Janvier and Sanchez – were also on site at Edmonton’s AGA for a showing before select audience members on Friday evening, March 4.

Unfortunately, the third surviving member, 96 year-old Daphne Odjig who makes her home in southern British Columbia is bed-ridden. However she continues sharing her artistic talents from her bedside. 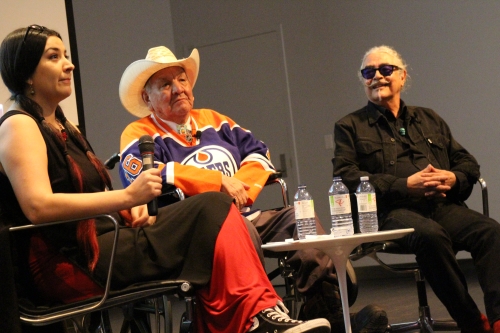 Curator Michelle Lavallee of Regina interviewed renowned artists Alex Janvier and Joseph Sanchez at a public forum at the Art Gallery of Alberta on March 6. Photo by Terry Lusty

An accompanying display by two rising female artists, Brittney Bear Hat and Richelle Bear Hat, who – like Janvier and Sanchez – were on hand and were provided the opportunity to talk about their particular art in the presence of hundreds of visiting spectators.

At both venues, the artists graciously availed themselves to pose for photographs and to autograph art cards, programs, notebooks, etc, as well as large, hard cover copies of the recent publication, Canada’s Native Indian Group of Seven that boasts no less than 360 pages and was published in 2013 by the Mackenzie Art Gallery in Regina. It went on to capture three Saskatchewan book awards. 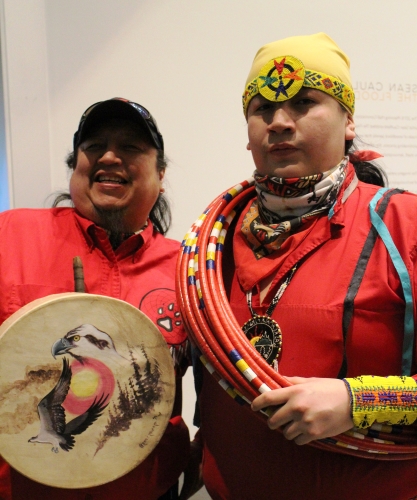 Jackson Beardy III and his father Byron (Jackson II) Beardy performed at the Art Gallery of Alberta in Edmonton on March 4 and 5 2016. Photo by Terry Lusty

One of the true highlights of the weekend’s events was the inclusion and appearance of a son and grandson of the late Group of Seven artist, Jackson Beardy. The duo demonstrated their Native traditions of drumming, singing and hoop dancing.

Their performance, entitled ‘Dancing for my father, Singing for my son’, had 22 year-old Jackson lll hoop dance in honour of his grampa, Jackson Beardy, while accompanied by the drumming and singing of his father, Byron (Jackson ll) Beardy. They performed in the main foyer of the AGA, for approximately 150 – 200 visitors who were treated to the intricate motions of Jackson lll as they snapped pictures and applauded the two generational descendants of Jackson Beardy.

Jackson lll witnessed his first hoop dance when he was four years of age; he received his first set of (five) hoops when he was six. Today, he can perform with as many as 30 hoops. He debuted at age nine and, along with his father, he demonstrates his skills at various schools, conferences, powwows, celebrations and gatherings. In 2006, he was a featured guest at the popular Dreamcatcher Youth Conference in Edmonton.

The duo’s presentation to the audiences is about, “Jackson lll’s journey in becoming a hoop dancer, the history of the dance, traditional teachings, and the special father-son relationship as they travel throughout Turtle Island,” explains Byron.

Young Jackson was also privileged to compete in the Junior Category at the World Championship Hoop Dance Contest at Phoenix, Arizona in 2004 – 5. He placed in the top 10. About this same time, explained Byron, “we travelled a lot” to many events and, all the while, the bond between the two matured and developed.

In 2007, Jackson lll was named one of Manitoba’s “In – Motion” champions by the office of the Minister of Culture, Heritage, Tourism and Sports, the Honourable Eric Robinson. 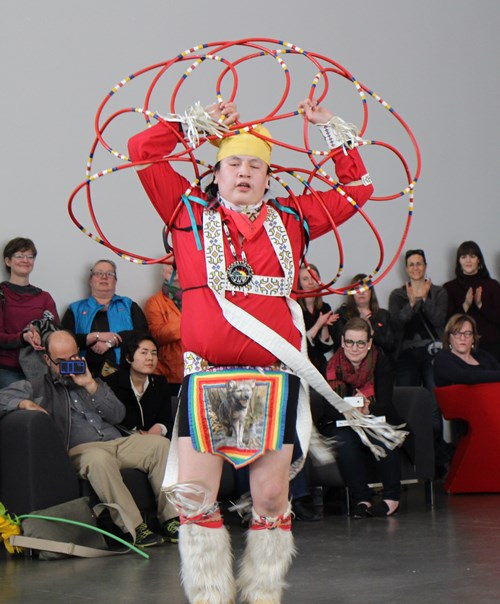 Jackson Beardy III (Jackson II) at the Art Gallery of Alberta as an homage to his grandfather Jackson Beardy and the other members of the Professional Native Indian  Group of Seven.  Photo by Terry Lusty

Not one to be idle between events and awards ceremonies, Jackson lll originated a noon-hour mentoring program, teaching students at Shaughnessy Park School in north-end Winnipeg about hoop dancing etiquette and meaning via traditional Cree teachings.

Then, in 2009, he was again recognized for his contributions when he was awarded ‘Trail Blazer of the North’ by MKO and the city of Thompson (Manitoba) in addition to a recognition and appreciation award from Perimeter Aviation during their 50th Anniversary Gala in 2010 for his continuing work with youth in Manitoba, and elsewhere in Canada and North America.

In the fall of 2013, he was invited to perform at the 250th anniversary of the Royal Proclamation on the grounds of Buckingham Palace and Canada House in London, England with an entourage that included chiefs, World War ll veterans and Elders from Manitoba and Saskatchewan.

Outside of his traditional performing routines, Jackson possesses a particular affinity for music. He is an avid guitarist who writes and records his own material. One event he’ll not soon forget was his 2014 meeting with an iconic guitarist in the person of the great Carlos Santana who visited while touring with yet another icon, Rod Stewart!

Does he have future plans? You bet, but nothing to do with dancing or music or art. According to his dad, “he likes culinary art,” and hopes to, someday be a chef.

As for Byron, he never kept any of his father’s art. After he died (when Byron was 14), “I gave everything away,” he admits.  Would he have gone on to be an artist himself had his dad lived longer? Quite possible, he further admits and his sister and seven year-old son both have art potential.  He, himself, took a few art courses at the University of Manitoba and although he “liked” it, he felt “too pushed by family” to follow in the footsteps of his late dad.

Instead, he felt “hurt and anger” for the loss of his father while he was still so young, just 14. He’d passed away at age 40 following a heart attack in 1984. The one thing he remembers vividly is, “my last talk with him . . . about alcohol, booze and smoking.” Byron claims he was cautioned by his dad, “don’t let it get to you.”

But it did get to him. Then, one day he smartened up and “let it go.” The light went on for him when he got to thinking seriously about his children and what these vices would do to them. He’s been straight now for a number of years.

Some of his passions include music, guitar, and singing – especially country rock and some gospel. “My gift, I’ve been told, is singing,” he explains. Besides, “I like to help people.”

And so, it was a natural progression for him to sing at funerals and provide comfort to those suffering loss.

At this time in his life he works for Four Arrows Health Authority Inc., and has been for seven years. He is also working at hosting a two and a-half day Food Sovereignty Summit at Canada Inn Destination Centre Club Regent Casino Hotel in Winnipeg on June 21-23.

Really, the man is on a good path. Spiritually and emotionally, he travels that good Red Road.

And, yes, he is a son of the late renowned artist, Jackson Beardy. And, yes, he and his own son carry the name, proudly. So, for three generations the name has prospered.

Be the first to comment on "Dancing for my father, Singing for my son"