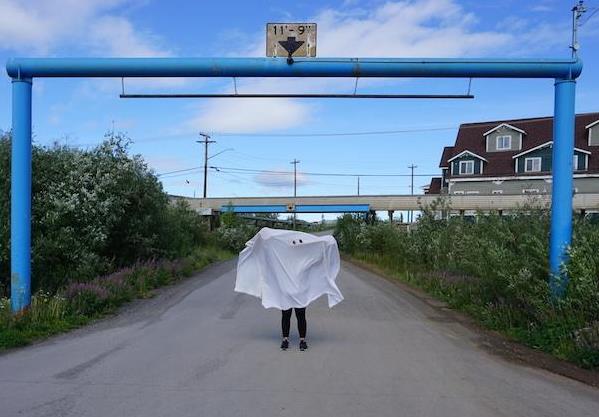 (ANNews) – On June 21, for National Indigenous Peoples Day, the Art Gallery of Alberta will be offering free admission all day long and special programming. Take in exhibitions featuring the work of First Nations and Métis artists, including Cul-de-Sac, Fix your hearts or die and a new exhibit entitled akunnirun kuupak.

Also on June 21, join Dakota/Lakota multimedia artist and designer Alaynee Goodwill-Littlechild for a free parfleche workshop. Parfleche is painted rawhide, a durable and incredibly versatile material that was essential to many Plains tribes. The designs painted on parfleche were just as important as what was held inside, often showing special family designs, stories and important events.

Workshop participants will learn about the history of Parfleche and its significance to Plains tribes. They will construct and paint their own parfleche piece to take home.

Three 45-minute workshops will be held on June 21 beginning at 2 pm, 2:45 and 3:30. Spaces are limited for each workshop; come early as each workshop will be filled on a first come first served basis.

Also at the AGA, on June 27, a free art-focused film screening of Skindegenous will be held in the Ledcor Theatre at 7 pm. Skindigenous is a 13-part documentary series exploring Indigenous tattooing traditions around the world. Each episode dives into a unique Indigenous culture to discover the tools and techniques, the symbols and traditions that shape their tattooing art. In this series, the art of tattoo becomes a lens for exploring some of the planet’s oldest cultures and their unique perspectives on life, identity, and the natural world.

The AGA is pleased to screen four episodes of Skindigenous in conjunction with the current exhibition Marigold Santos: SURFACE TETHER.

The AGA Manning Hall Commission is featuring new photographic work by Alberta-based artist Kablusiak. The exhibit, entitled akunnirun kuupak will be on display until October 6, 2019.

Kablusiak is an Inuvialuk artist and emerging curator based in Alberta. akunnirun kuupak stems from a trip back to Inuvik, part of Kablusiak’s ancestral territory, in the summer of 2018 as part of the TD North/South Exchange residency program. The residency trip marks the first time Kablusiak returned to the area as an adult. During the residency period, Kablusiak had the chance to remount their performative ghost series, which they have been working with over the past several years.

The ghost serves as a foil for understanding their identity as an urban Inuk who is part of the growing Inuit diaspora. In bringing the ghost performance to Inuvik after a long absence and presenting the culmination of this work in Edmonton, Kablusiak reconnects to an important part of their being while simultaneously creating a presence for Inuit wherever they may be.

Kablusiak is an Inuvialuk artist and curator based in Mohkinstsis (the Cree name for Calgary) and holds a BFA in Drawing from the Alberta University of the Arts, Calgary.They recently completed the Indigenous Curatorial Research Practicum at Banff Centre for Arts and Creativity. Kablusiak uses art and humour as a coping mechanism to address cultural displacement. The lighthearted nature of their practice extends gestures of empathy and solidarity; these interests invite a reconsideration of the perceptions of contemporary Indigeneity.

Kablusiak is a board member of Stride Gallery (2016-present). Awards include the Alberta Foundation for the Arts Young Artist Prize (2017), Primary Colours Emerging Artist Award (2018) and the Alberta College of Art and Design’s TD Insurance Meloche Monnex Career Award for Alumni (2018). Kablusiak, along with three other Inuit curators, will be creating the inaugural exhibition of the new Inuit Art Centre in 2020.

Exhibit curator, Jessie Ray Short is an artist, filmmaker and independent curator whose cross disciplinary practice involves memory, visual culture and Métis history. In the past 10 years she has exhibited work nationally and internationally at venues including The Banff Centre for the Arts, M:ST Performative Arts Festival in Calgary, and at the Wairoa Māori Film Festival in Wairoa, Aotearoa (NZ). As a curator she has worked on various projects most notably Jade Carpenter: Mourn at City of Calgary Open Spaces Gallery and Mixed Berries: Amanda Strong and Bracken Hanuse Corlett at Gallery 2, Grand Forks, BC. She has worked for the Ociciwan Contemporary Art Collective, based in Edmonton, and currently works as a program coordinator for TRUCK Contemporary Art in Calgary.

In 2019, as part of their commitment to innovation and creativity, Capital Power is supporting the presentation of new works by Alberta contemporary artists in Manning Hall, in addition to major exhibitions throughout the AGA.

The Art Gallery of Alberta is a centre of excellence for the visual arts in Western Canada, connecting people, art and ideas. The AGA is focused on the development and presentation of original exhibitions of contemporary and historical art from Alberta, Canada and around the world.

The AGA also offers a full range of contemporary and historical art from Alberta, Canada and around the world. Founded in 1924, the AGA maintains a collection of over 6,000 objects and is the oldest cultural institution in Alberta and the only museum in the province solely dedicated to the exhibition and preservation of art and visual culture. www.youraga.ca

Be the first to comment on "Art Gallery of Alberta celebrates National Indigenous Peoples Day and much more!"