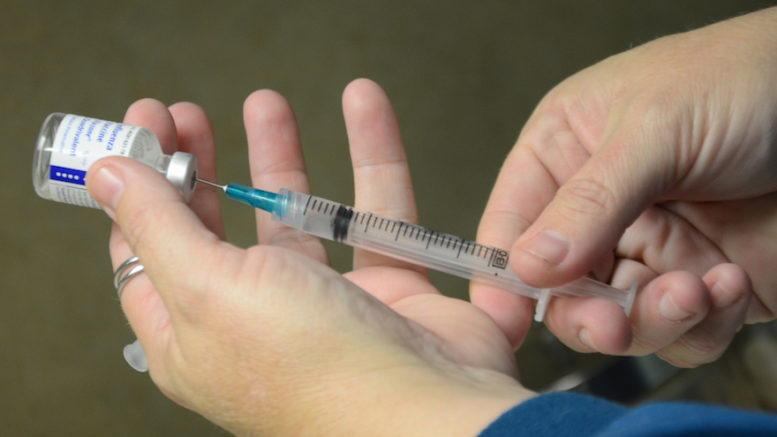 (ANNews) – Over the past two weeks, The Aamskapi’Piikuni Blackfeet Nation in Browning, Montana has been providing vaccines to the Blackfeet nation in Southern Alberta.

In a collaboration between the Blackfeet Nation and the Siksikaitsitapii Blackfoot Confederacy Tribal Council (BCTC), a mobile immunization clinic was set up at the Peigan-Carway Medicine Line at the Canada-US border.

After the majority of the Aamskapi’Piikuni tribe population were immunized, the American Blackfeet nation offered their extra supply of Pfizer and Moderna as a gift.

There are roughly 10,000 people living on the American Blackfeet Nation and 95 per cent of people who are eligible for shot have been immunized after the state prioritized Indigenous communities.

“We’re probably at about 98% (fully) vaccinated here on our reservation,” said Piita’hkotokii James McNeely, public information officer with the Blackfeet Tribe in Browning, in a news release.

“I am actually brought to tears today hearing that the efforts to assist our relatives and folks across the medicine line with vaccines has been awesome!” said McNeely. “Many of the folks cried today when they were able to get vaccinated.”

More than 30% of adults in the U.S. are fully vaccinated, while in Canada that figure is around 3%.

Bonnie Healy, Blackfoot Confederacy health administrator, said she has happy for the vaccinations. “We have family members that live in those areas,” she said. “If we can get these places safe, then it’s safe for our children to go to school there. It’s safe for our elders to go shopping in their stores.”

The vaccines were provided to northern Siksikaitsitapi tribal members and Alberta residents in the Cardston area, which is about a 20-minute drive from the crossing.

The mobile drive-thru vaccination clinic was available to participants who were 16 years or older, all that was needed was a status card or passport.

There were approximately 750 total doses available.

“The idea was to get to our brothers and sisters that live in Canada,” said Robert DesRosier, emergency services manager for the American Blackfeet tribe. “And then the question came up — what if a nontribal member wants a vaccine? Well, this is about saving lives. We’re not going to turn anybody away.”

“We’ve been vaccinating many people from all walks of life to help save lives and end this pandemic,” said McNeely. “This is a time for reconciliation and healing and [for] government-to-government relations to become stronger. Way to go, everyone!”

Vaccinations are rising, infections are lowering as Alberta nears its Stage 3 criteria