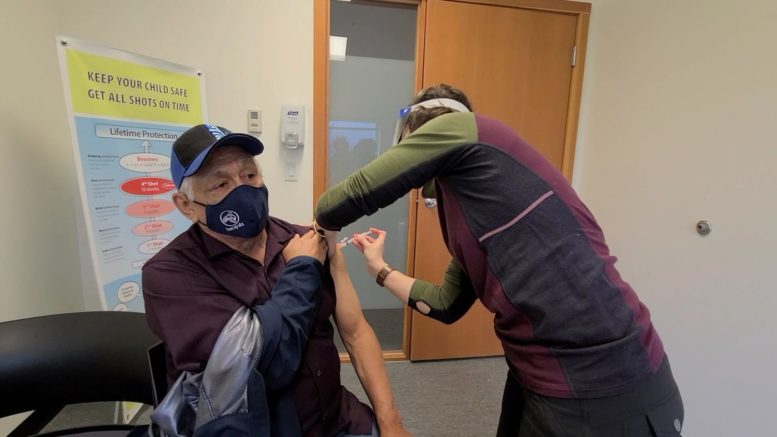 (Vancouver Island, BC) – Immunization is underway for six remote Nuu-chah-nulth nations, as the Moderna COVID-19 vaccine is administered within the communities.

Huu-ay-aht Chief Councillor Robert Dennis is among those who received the vaccine today and said that he feels “comfortable” with that responsibility.

“We want to lead by example,” he said. “If there’s something that we can do to stop the spread, we’re willing to be front and centre to ensure that it gets done.”

The vaccine is being made available to all 123 Huu-ay-aht members living in Anacla aged 18 years and older, excluding women who are pregnant, nursing or breastfeeding.

Forty shots were administered today (Jan. 4), with a second round of vaccinations planned for Thursday.

Unlike the first Health Canada-approved COVID-19 vaccine by Pfizer-BioNTech, the Moderna doses do not require ultra-cold storage, making it easier to transport to remote communities.

To guard against the potential “sabotage” of immunization programs, the province is not releasing transportation details.

Community members in Yuquot are slated to receive their first round of vaccines on Wednesday.

“It’s a huge relief because it’s the only defense we have right now,” said Wanda Wilson, Mowachaht/Muchalaht First Nation administrator. “I am more excited than I am afraid.”

Combined with the nation’s continued efforts to wear masks and sanitize their hands, Wilson said “it’s almost like you can see a little bit of the light at the end of the tunnel.”

For Dennis, immunization means that his community will be one step closer to being able to gather again. He hopes that attending potlatches is in Huu-ay-aht’s near future.

“That’s one of the big things people are missing,” he said. “Being able to get together with family, share a good, big meal and [enjoy] songs and dances. I’m extremely excited about that happening again.”

While there are a select few who are hesitant to receive the vaccine, Dennis said that the vast majority of the Huu-ay-aht members are “willing and waiting.”

In effort to develop herd immunity, Watts said it’s really important to get as many NTC members vaccinated as possible, however no one is being forced.

“In the meantime, we have to continue to maintain the same rules that [Provincial Health Officer] Bonnie Henry has been telling us all along,” she said.

Once the more remote communities are immunized, Watts said the remaining Nuu-chah-nulth nations will “be right in line.”