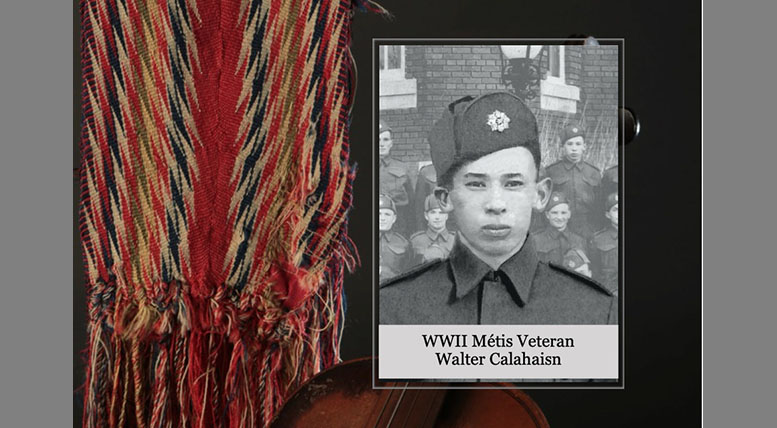 “75 years ago, the young sons and daughters of our Nation answered the call to defend a country they did not know, in the name of a country that did not respect them.  Canada promised opportunity and prosperity upon their return home from the war.  A promise that was never kept – until now.  It is important to ensure that our WWII Métis Veterans take their rightful place in Canadian history. Métis Veteran Walter Calahaisn and all Métis Veterans must be honoured and respected for their sacrifice in protecting freedom and liberty,” stated Minister David Chartrand.

The $20,000 Recognition Payment is part of the Métis Veterans Legacy Program established in partnership with the Trudeau government to commemorate forgotten Métis soldiers. Mrs. Calahaisn will be the tenth spouse to receive the Recognition Payment since Métis Nation Veterans Minister Chartrand announced on June 29, 2020. The policy is now inclusive of all surviving spouses and common-law partners of Métis Nation WWII Veterans regardless of when their loved one passed.

“The importance of family remains the essence of the Métis Nation,” stated Minister David Chartrand. “Our WWII Métis Veterans who have passed would want to take care of their families and ensure their future and prosperity.  We now have the ability to help the families of our Veterans heal, and take comfort, knowing their loved one is being honoured as a Hero of this country.  Our Heroes Today, Tomorrow and Forever.”

“Today, we thank Walter Calahaisn for his years of service and remember all he accomplished as a Private and as a Métis citizen,” said President Audrey Poitras.  “Myrtle was by Walter’s side for 50 years, working with him, caring for him, and I am so glad to present her with this recognition cheque today. For too long, the dedication and bravery of Métis veterans like Walter went unrecognized. Métis across the Homeland sacrificed much in defense of their country. Now, through the Métis Veterans Legacy Program, we are able to give them and their spouses the acknowledgement and compensation they deserve.”

He married Myrtle on July 28, 1950, and raised nine children.  Myrtle is a member of the Institute for the Advancement of Aboriginal Women. In 2009 she received an ESQUAO award that recognizes Aboriginal women who have positively impacted Alberta’s Aboriginal communities. Myrtle is also the recipient of the Queen Elizabeth Diamond Jubilee Medal.

“Our Heroes Today, Tomorrow and Forever”

The MNC represents the Métis Nation in Canada at the national and international levels. The Métis Nation’s homeland includes the 3 Prairie Provinces and extends into the contiguous parts of British Columbia, Ontario, the Northwest Territories and the United States. There are approximately 400,000 Métis Nation citizens in Canada, roughly a quarter of all Aboriginal peoples in the country.