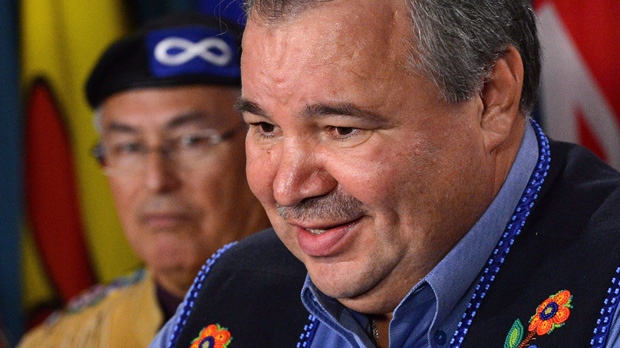 (June 2019) – On June 6, 2019, at Juno Beach in Normandy, France, members of the Metis National Council (MNC) and the Manitoba Metis Federation (MMF) gathered with leaders from around the world to mark the 75th Anniversary of D-Day.

“This is a proud moment for the Métis Nation and Veterans,” said MNC President Clément Chartier. “I am heartened that we are included in this global commemoration and justifiably proud of our Citizens’ bravery and sacrifice from 75 years ago.”

The anniversary also marks a period of positive change when it comes to acknowledging the contribution of Métis Veterans. The Federal Government unveiled its most recent budget: $30 million to commemorate forgotten Métis Soldiers.

“I have spent the better part of the last two decades fighting for compensation for both former Métis Soldiers and their Families,” said David Chartrand, MMF President and the Métis Nation’s Minister Responsible for Veterans. “Even on this day of reflection, I am even more motivated to move forward and ensure that the sacrifice and bravery of Métis Soldiers are not forgotten.”

In March, Minister Chartrand emphasized the need to act quickly as there are few surviving Métis Veterans from the Second World War. He met with officials from the federal Veterans Affairs Department to stress that Canada must be indebted to Métis Veterans as they fought for democracy and freedom.

“Like so many young Canadians, our Métis Youth put their lives on the line for a greater purpose,” added Minister Chartrand. “I am pleased to know their efforts will be properly recognized. We are grateful to the Trudeau government as it continues on the path of Indigenous reconciliation. The $30 million promised in the budget will be used to create a trust fund for a number of Veterans-related initiatives. Most importantly though, I am thankful for the courage of our Veterans and for their service to all Canadians.”