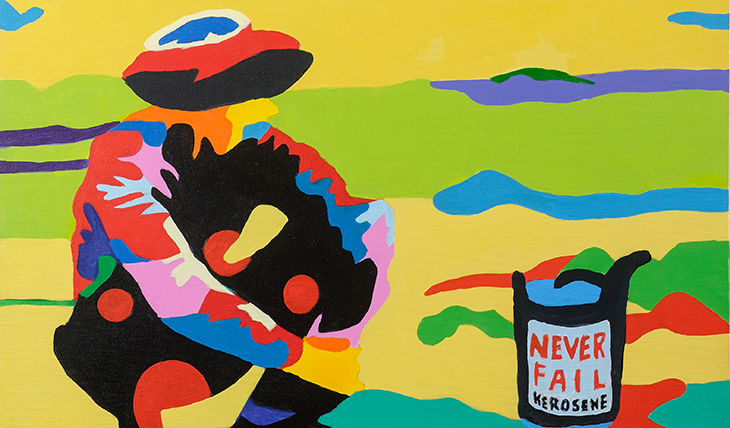 (ANNews) – The vibrant image on the cover of this month’s Alberta Native News is titled ‘Resignation’ and it is the creation of Jean-Paul Langlois, a gifted Metis contemporary artist from Vancouver Island. It is from a series by Langlois – “Escape from the White Witches: The Graduation of Eli,” which is the story of his grandfather Eli’s time in Indian Residential Schools. 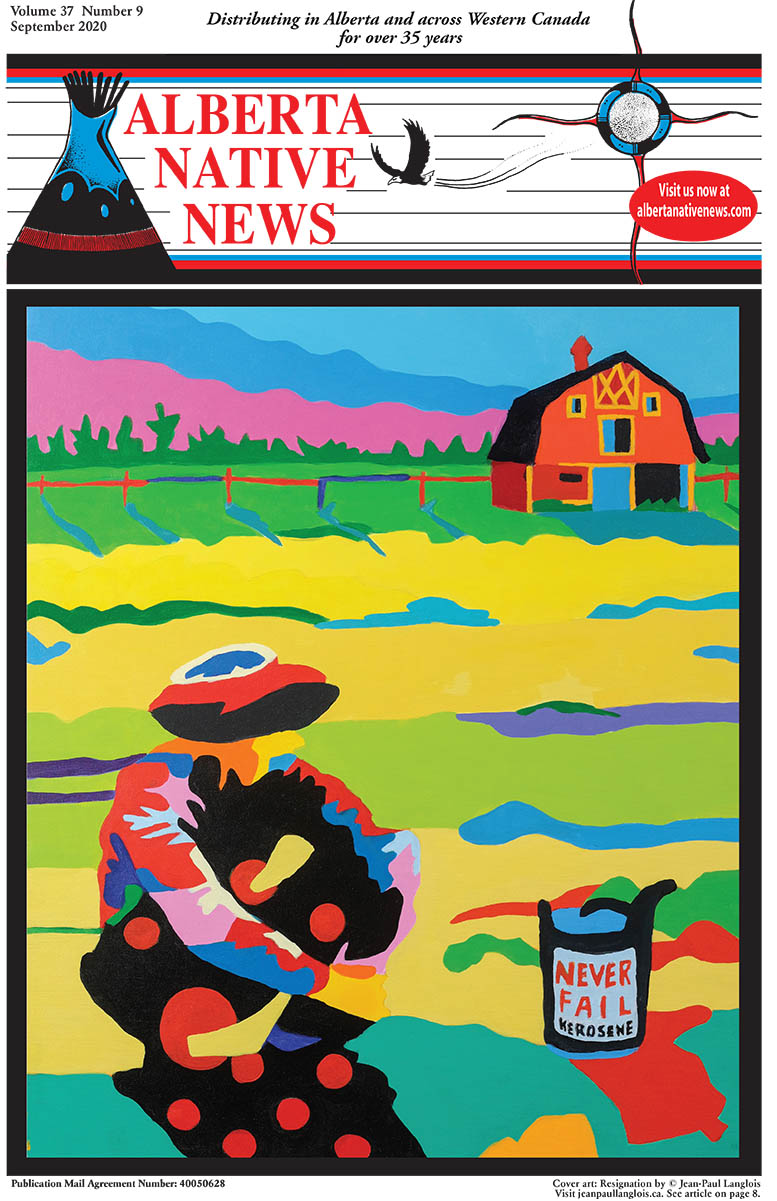 The robust colors of yellow, blue, green, pink, purple, red, and orange are used in the cover image as well as in other signature pieces by Langlois. A second painting from the Escape from the White Witches series appears on this page, titled ‘Barn Burning’, that depicts the story of Eli’s life journey before he met Langlois’s grandmother- when Eli was sold into indentured servitude.

Langlois resides on the mainland in East Vancouver, British Columbia. And just like any of us Indigenous misfits, Langlois’s Metis roots were severed when his grandfather was sent away to an Indian Residential School in Northern Alberta.

Langlois did not grow up learning about his Metis culture, but instead he was gifted with being able to tell stories through art – and would later learn the importance of art through an Indigenous lens. Langlois started cartooning at the age of three and slowly progressed into finding his own painting style, crediting his mentors that allowed him to succeed and flourish as an artist, and in Langlois’s words, “if you don’t have someone to guide you, you will be lost.”

At the age of 16, Langlois was trained in the use of watercolors that became one of many implements contributing to how he depicts his perception of Indigenous people. As he progressed in his ways of storytelling, acrylic paints helped emphasize his love for using robust and vibrant colors. Throughout Langlois’s art journey, he has been highly influenced by the beauty and violence of spaghetti western films that symbolized for him the story of colonization, as well as the first movie he fell in love with, The Wizard of Oz, “the movie that has it all”-  beauty, violence, darkness, rubbish, fantasy and color.

The story of colonization within Langlois’s family tree is told in the Escape from the White Witches series, where Jean-Paul’s grandfather Eli, did not share much about his experience, other than to say that the nuns were cruel. Instead, he imparted a Langlois family legend. The family legend shared was that grandfather Eli was sent to a farm to work after his ‘graduation’ from his time at the Indian Residential School, and as seen in the art piece ‘Barn Burning’, one day on the farm where Eli worked, the barn caught fire. 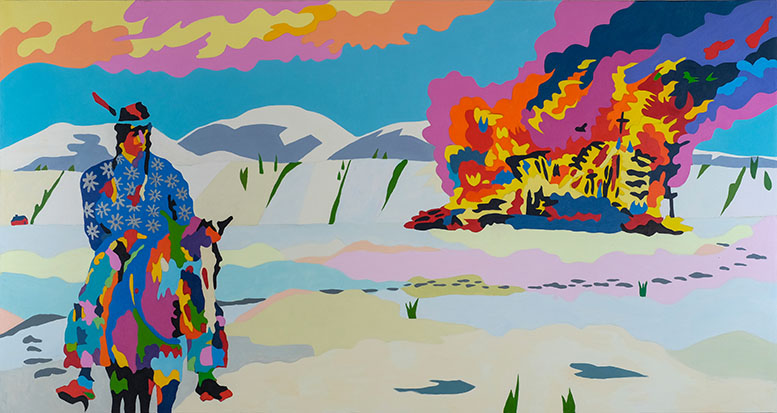 The Langlois family legend taken from ‘Barn Burning’ also tells the story that when asked if Eli was responsible for lighting the barn on fire, Eli played dumb, shrugged and said, ‘I don’t know.’ That same day, Eli was released from the farm and went on to homestead land in Northern Alberta where he met Langlois’s grandmother and together they had six children.

Langlois interconnects his love of colour, the family legend and the use of dramatization taken from spaghetti westerns that he has been watching since childhood to tell the story of ‘Resignation.’ It is about both becoming resigned to the decision to start the fire as well as receiving a notice of resignation. The story being told, in that moment, is that Eli had made the decision to lash out and get revenge for all ills done to him by both the nuns and his ‘masters’ – so the Langlois family legend says.

Langlois’s artwork can be found on his website jeanpaullanglois.ca and other social media. Within the City of Edmonton, his most recent building mural, ‘The Conversation’ (https://youtu.be/5WKHzgaf2j0), can be found on the sidewall of Second Skin Laser located at 6551 111 St.

Be the first to comment on "Feature artist for September 2020: Jean-Paul Langlois"