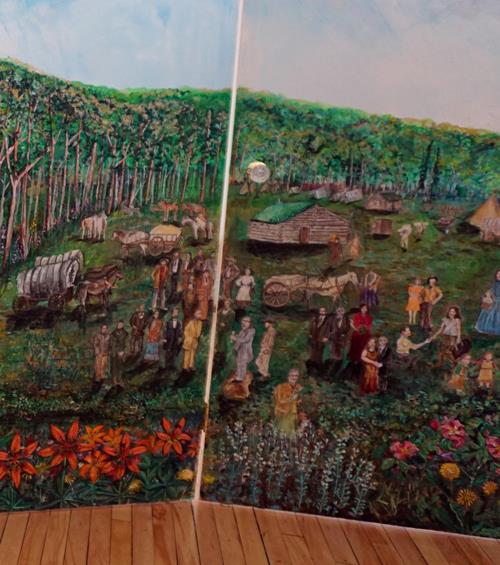 (ANNews) – The Stony Plain Multicultural Centre is currently hosting Métis artist Heather Shillinglaw’s newest exhibition of art entitled “Buffalo Corral,” a unique undertaking that highlights, among other things, the Cree and Métis heroes that she holds in high esteem. Writers, poets, painters, political leaders and family members come together in what the artist describes as “an idealistic, romantic perspective of the Strathcona Refinery from its beginning in the 1800s until today” in a walk-in door panorama that captures the essence of cultural awareness and the beginning of an era that brought modern-day growth and change to Alberta’s central region.

This newest exhibition of Shillinglaw’s art got underway on January 9 and continues until March 3, 2017. 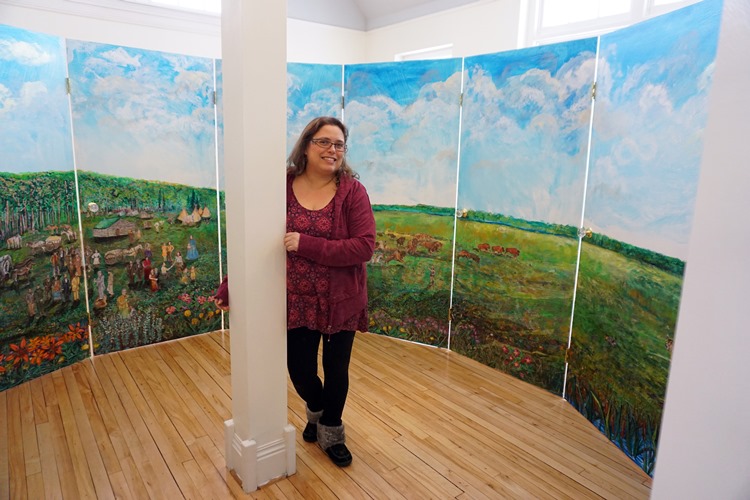 Metis artist Heather Shillinglaw poses with her “Buffalo Corral” exhibit now on display at the the Multicultural Centre in Stony Plain, Alberta until March 3, 2017.

“Buffalo Corral,” explains Shillinglaw, “is a panorama made out of doors. Its 360-degree perspective of landmarks embraces our 1850s’ industrial refinery row and is translated in my own romantic perspective of using beadwork and research of historical painters that portrayed the Metis; their work is located in the Museum de Beau Arts, Ontario Gallery of Art and the Chicago Institute. The time period of the Romantic Era is something that I studied in galleries in Paris, Germany and Austria. A drama that highlights the awe of nature that the romantics translated via many mediums has inspired my collaging Métis traditions in beadwork, based on my own interpretation of beading techniques. I was inspired by the historical paintings to modernize the Métis and Cree heroes of today.”

“Buffalo Corral” is a colourful and educational look at Métis history in western Canada, particularly in Alberta. Comprised of eleven 72-inch by 36-inch door-styled panels, Shillinglaw’s new exhibition of art gives viewers an extraordinary look into Métis culture and lifestyle in an uncertain era that initiated the ongoing growth of western civilization in Alberta. While this must-see collection of art will inspire, enlighten and educate all Canadians, the significance of the work is the way in which it honours and celebrates the achievements of the Métis peoples of Alberta. 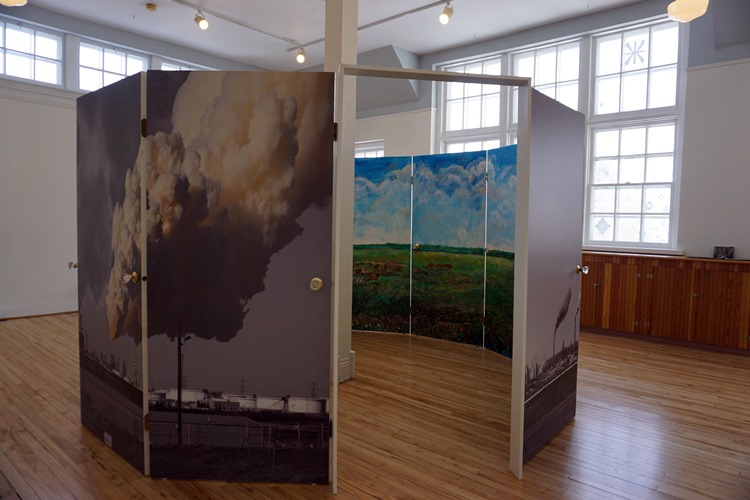 “Buffalo Corral” is a colourful look at Metis History in Western Canada – especially in Alberta, by Metis artist Heather Shillinglaw.

In a statement, curator Lucille Frost noted that “the Multicultural Centre Public Art Gallery is committed to exhibiting and promoting the work of Alberta’s artists. Since 1974 we have diligently presented a diverse selection of high quality visual arts within the community of Stony Plain. With great pleasure, we begin the 2017 exhibition season with Métis artist Heather Shillinglaw’s Buffalo Corral, an exhibit I would encourage every Albertan to visit. The exterior of this installation presents the vivid image of a contemporary industrial landscape. Marked by clouds of pollution and juxtaposes, this image is showcased against an internal organic landscape populated by historic and contemporary individuals who have influenced Heather throughout her life. The panoramic image of an industrial landscape is created by interconnected doors to form a corral within the gallery; inside this corral the artist has rendered an alternative forest landscape populated by Metis and Cree individuals whom have influenced Heather and her creative process. The complex personal narrative portrayed within the corral is starkly juxtaposed against the polluted environment which surrounds the forest oasis, asking viewers to consider the impact we have on history and on our environment.”

A proud Métis artist, Shillinglaw noted that in the making of Canada, “the struggle of our lives is interwoven. As an artist, I make narratives through materials telling stories of the hardships of the Metis women inextricably linked to whom they married, some treated as peasants and traded as country wives. They led devalued lives, surviving on their skills of trapping and harvesting and utilizing Indigenous medicines for their sustainability.

“My personal journey of discovering our unique landscape occurred about 20 years ago on a boat in the Straits of Magellan. Heading due north, with the open-ocean Drake Passage to the south, are two of the three navigable passages around South America between the Pacific and Atlantic Oceans. Through my practice, I have learned from Elders and medicine women and through my travels I have realized the uniqueness of the Albertan landscape. I have merged stories from my childhood and visions of my mother walking in the forest. My paintings, installations and teachings come with the goal of sharing the public art of our landscape and sharing with the viewer how those landscapes help to heal us. By embracing spirit, mind and body we can live in a healthy, balanced way.”

On the journey through her artistic life Shillinglaw has had close mentors, Joane Cardinal-Schubert, “whose wise words focus on some simple techniques to improve the viewer’s attention; also the very prominent and respected First Nation artist Alex Janvier, with whom I learned much. In 2009 I was an invited panelist to two symposiums on Native Rights and Women’s Rights in Argentina and Paraguay. While there, I engaged many groups with exhibitions and panel discussion that focused on the preservation of the land through art. I also developed connections with the Canadian Embassy, who subsequently sponsored travels to Mendoza, Argentina, where I worked with an anthropologist studying tribes such as the Maputches.” 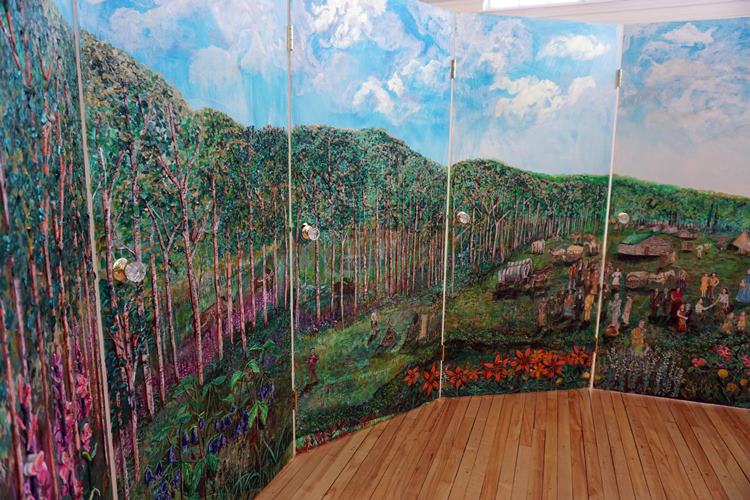 “Buffalo Corral” by Heather Shillinglaw consists of an exquisite panorama made of paneled doors, painted to depict Metis History.

In Paraguay she worked with a Unicef school in a Tobian-Guaranian village.

“Their medicine woman invited me to her home,” noted the artist. “She shared with me her knowledge about her medicines. I found that I was able to understand what she was saying without translators, though I did not speak her language. We understood each other because we both cared and shared and because we both came from a similar natural place.”

“Buffalo Corral” pays tribute to the history of the bison in North America, honouring the near extinction of the species which occurred in the 19th century and the transition our landscape has undergone since that time.

“These painted panels,” she explained, “depict the bounty of Strathcona County in the time before settlement, when Indigenous peoples would use the natural formation of a forest to trap bison during the hunt. Hunted to near-extinction during the 17th Century, the bison, which once numbered in the tens of millions numbered less than 100 in the wild by the late 1880s.

“First Nations and Métis peoples living in what is now Canada, used over 1000 different plants for food, medicine and materials in cultural rituals and mythology. Many of these species, ranging from algae to conifers and flowering plants, were indispensably important within Indigenous communities. Knowledge of plants and their uses has empowered peoples to thrive in Canada’s diverse environments.”

Heather has chosen to include many of these plants within the corral; by portraying these resources she recognizes their importance to Metis and Indigenous culture as well as to her own personal life.

Within one of the panels Shillinglaw introduces her audience to two important figures, Dr. Troy Patenaude and Mr. Malcolm Norris. These two Metis men appear in traditional trapping garb, and are both set to the outskirts of an encampment, standing next to a campfire with leather tanning beside them as they both work alone.

“Malcolm Norris (1900–1967) was an influential Canadian Métis leader and activist of the 20th century,” she explained. “Norris served in the Second World War with the Royal Canadian Air Force then after the war with the Royal Canadian Mounted Police; he also worked as an employee of the Hudson’s Bay Company. During his travels, he developed political views in response to the disorganization and poverty he saw in Métis and First Nations communities throughout northern Alberta and Saskatchewan. Norris was one of the founding members of the Métis Association of Alberta; he sought self-government and fiscal self-sufficiency for his people and contributed greatly to Canadian Metis history by organizing the Métis Association of Alberta and of Saskatchewan.

A guest speaker, educator, curator, world traveller and an advocate for women and the challenges they face, Shillinglaw’s artwork has been part of private and corporate collections across Canada for the past two decades ever since she graduated from the Alberta College of Art and Design’s drawing program in 1996. A devoted wife and a nurturing mother, Heather has worked with the Bissell Centre, The McCauley Community League, Mental Health and various senior centres. Her art has been exhibited in numerous galleries around the country and she’s taken her work and her wisdom beyond Canada’s borders to places that include Paraguay and Argentina. She’s worked with Edmonton Public and Separate School Boards, participated as an artist-in-residence at numerous schools and ten years ago, she worked on an art project with Inner City Housing to help celebrate their 25th Anniversary. She’s won numerous awards, including the Biney and Smith International Student Competition in New York and a second-place finish in the annual Peace Hills Trust Art Contest.

Be the first to comment on "Heather Shillinglaw exhibit featured at Stony Plain Multicultural Centre until March 3, 2017"