The  stunning art that appears on the cover of the November 2015 edition of Alberta Native News is entitled “Nimaamaa.”  It is a gorgeous display of animal symbolism  and colour by the very talented contemporary Métis artist Timothy Mohan.

Nimaamaa, is Ojibway for Mother and in this cover art Mohan is depicting Mother Earth and all her creatures. 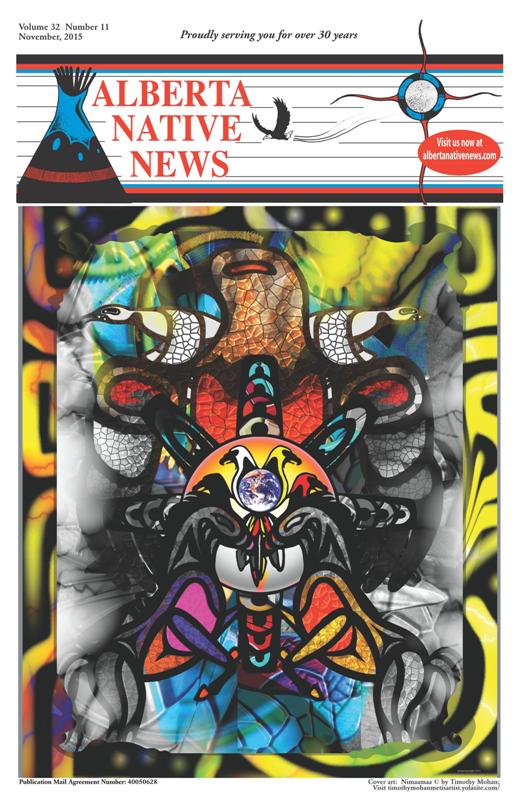 In “Nimaamaa” the vivid colours and the symphony of animal figures combine beautifully to form a striking cover image.

Mohan is no stranger to the Alberta Native News. His beautiful creations have been gracing our covers since 2002 and his artwork frequently appears on the inside pages as well. Most recently, his art appeared on the covers of our May 2015 and December  2014 issues, two of our most highly complimented covers over 30 years of publishing.

Most recently Mohan has been exercising his creative juices with incredible mixed media paintings of iconic people who have inspired him personally and artistically. Images include master carver Bill Reid  and actor Chief Dan George and also a fabulous collection of rock stars such as Metallica, Jimi Hendrix, Janis Joplin, Lennon and McCartney and several others.  These paintings are a fantastic tribute to these enormous legends and they are also a wonderful glimpse into the psyche and versatility of Tim Mohan.

Tim first received national acclaim for his motif “River Woman” used by Canadian fashion icon and recipient of the Order of Ontario Linda Lundstrom for her “La Parka” series. His artwork has appeared on the covers of dozens of publications and shown in countless museum solo exhibitions, including a special showing at the prestigious Toronto Intercontinental Hotel Centre during the Toronto 2010 G-20 Summit.

Tim has both a generous heart and spirit and he is also a sensitive thinker. Four years ago, he penned this poem as a tribute to Joanne who passed away from cancer.  He still grieves her loss and shares this poem with our readers along with her favorite painting which is entitled “Love of My Life”: 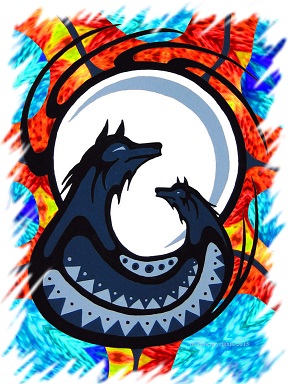 by Timothy Mohan
My fantasy is to float with you on a sea of clouds,
feeling a fresh raindrop, falling gently from the heavens above.
Angels sing out as I caress your naked body.
I enjoy making love to you, under the summer rain.

My fantasy is to be with you on a distant beach,
the smell of a salty sea breeze, waves kissing gently at our feet.
Holding your hand, wanting to receive your passionate kiss under the starlight sky,
and dreaming of a new day, waiting for my life to begin.

My fantasy is to lay with you by a crimson fire,
our shadows playing, touching, a distant stonewall becomes our canvas.
I hear the softness of a whisper, drifting slowly into my ear.
It’s you, telling me that you need more.

My fantasy is to have your arms wrapped around my body,
and to feel your heartbeat beating, your soft chest touching mine.
Two lost souls, ghost found only in a darkened mist,
always fantasizing about their first tender kiss.

Be the first to comment on "Feature artist for Nov. 2015: Timothy Mohan"