Tsuu T’ina, Alberta – The Indian Resources Council of Canada (IRC) is hosting the 19th Annual General Meeting (AGM), conference and tradeshow at the Grey Eagle Resort and Casino on December 2 and 3, 2015. This year’s theme “First Nations and Energy Transmission” is reflective of the enhanced involvement of First Nations in a growing industry.

First Nations Chiefs, Council members, technicians, and industry representatives from across the country will gather for two days to learn about vital topics pertaining to First Nations and energy transmission. The AGM enables the IRC, invited guests and presenters to address and discuss related issues, challenges, and opportunities. 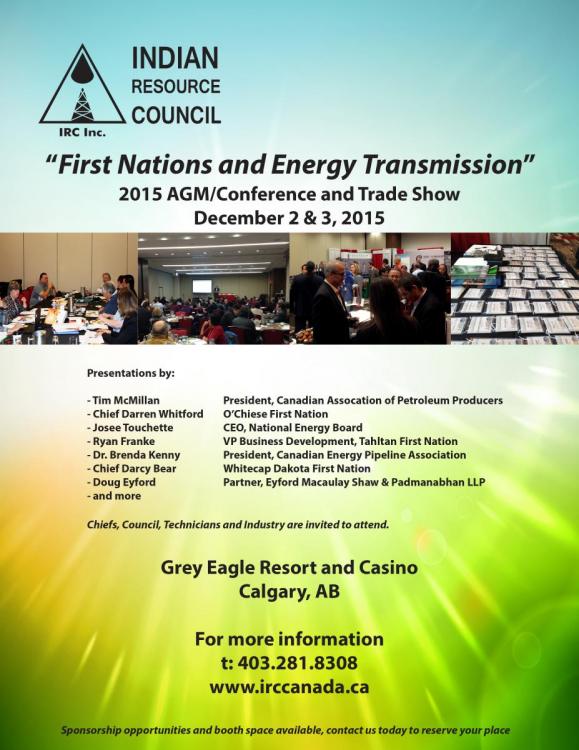 Stephen Buffalo, IRC President/CEO states, “The IRC AGM, conference and tradeshow is an opportunity for First Nations to engage with industry and Government agencies surrounding First Nations increased involvement in, and benefit from the business of transmitting energy. The IRC continues to champion and advocate for First Nations in the energy business.” The AGM promises to provide an opportunity for delegates and sponsors to network, gain insight into valuable First Nations perspectives, and promote their corporate profile. As a prospective delegate and/or sponsor, you are invited to learn more about the IRC, AGM, and availability of exclusive sponsorship packages by visiting the website,http://www.irccanada.ca/, or by calling the office, (403) 281-8308.

The IRC was founded in 1987 by Chiefs representing the oil and gas producing First Nations, following the recommendation of the task force that was established to study the role of the Crown in the management of First Nations oil and natural gas resources. IRC has a national membership of over 130 First Nations that have oil and gas rights and interests on their reserves and traditional lands. IRC advocates on behalf of these First Nations.

IRC and FNMPC sign an agreement to unite their interests

Indigenous participation in major resource projects conference will be held in Calgary: Feb. 26 & 27