(ANNews) – The beautiful and serene image on the cover of the May edition of Alberta Native News is by Saddle Lake visual artist and activist, Jaimee Hele-Cardinal. She recently joined us for an interview where she discussed her art, her past, and her philosophy about Mother Earth.

Jaimee explained that lot of her cultural paintings help her connect with the Cree culture. When she was growing up, her family didn’t really expose her to a traditional way of life. 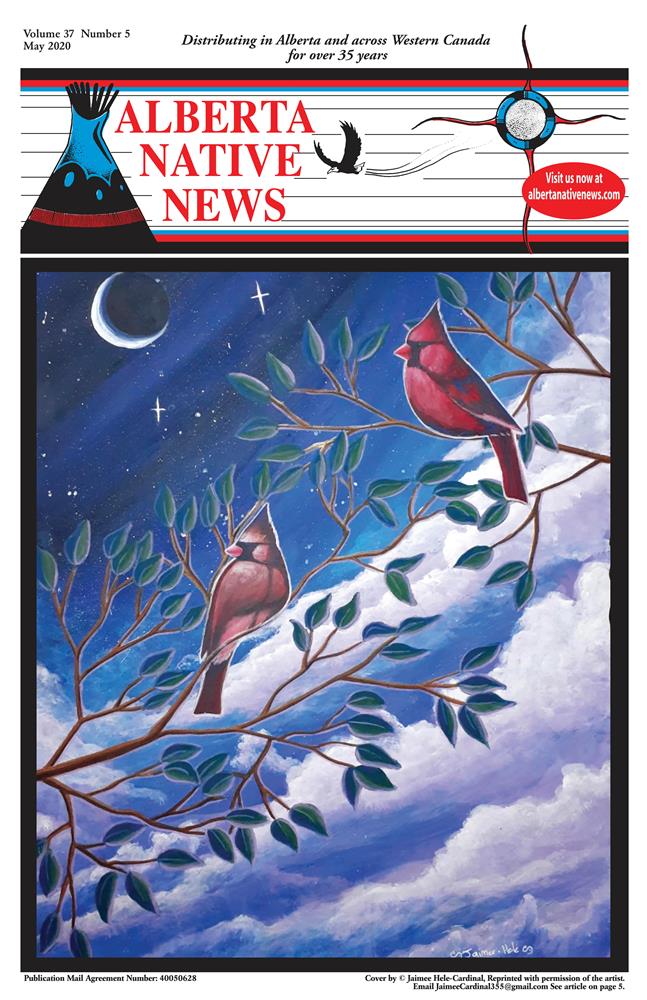 “I wasn’t brought to many powwows, ceremonies, or taught the roles and values on being Indigenous,” said Jaimee. “But I’ve come a long way on that journey and learned so much. My art is just a tool that I use to bring these connections closer and I’m ever so thankful of it.”

When asked about her past and her path to visual artistry, Jaimee said as a child she was always drawing or colouring, even doing so in places she wasn’t supposed to.

Drawing as a hobby wasn’t satisfying her though, so at around 11 years old she bought herself  a drawing tablet. “I learned most of my drawing skills from creating animal characters and practicing different kinds of backgrounds on my laptop and digital art programs,” she noted.

However, tragedy struck when her tablet disappeared (because it was either stolen or misplaced). Without her tablet, Jaimee wasn’t sure if her art was going to continue until she found a new way to create.

“I attempted acrylic art on canvas by myself. It was different, but I quickly learned and adapted to the new skill, understanding the paint and how to use it. These acrylic creations would take me on a different path of as an artist, but I was willing to accept and embrace change. That’s how I transitioned into the art I am doing today; I’m still experimenting with colours, shapes and different canvases,” Jaimee said.

Her art usually takes about 3 -5 days, depending on the specific piece and schedule. Due to the sheer amount of paintings and crafts she creates, Jaimee is able to create quality work incredibly quickly. When asked her about what drives her creation, Jaimee had this to say: 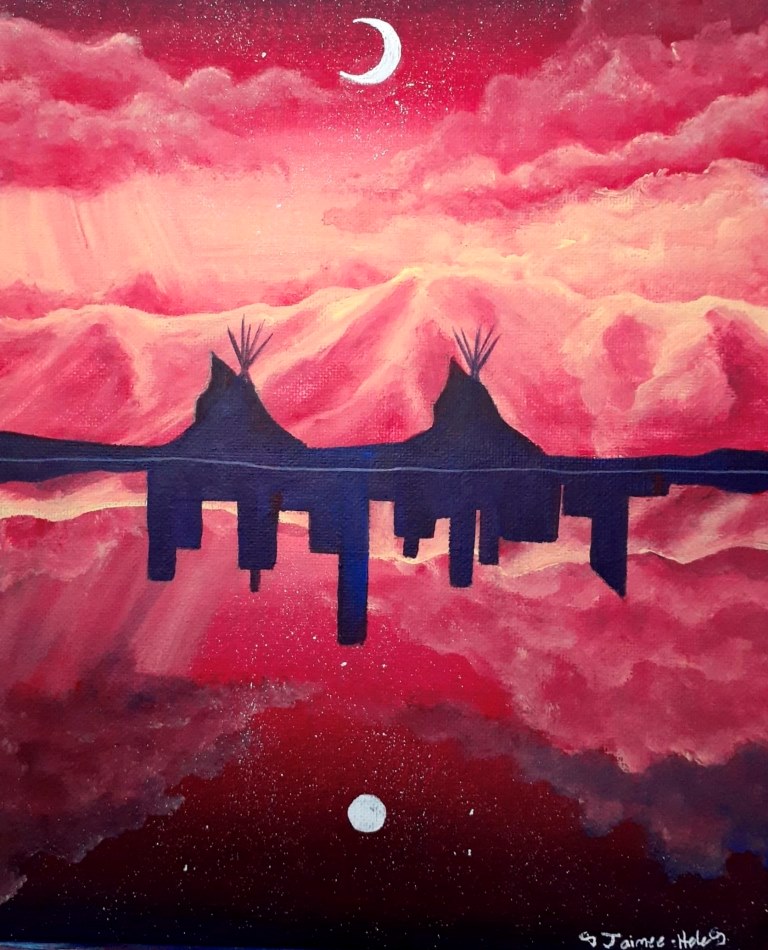 “I have a lot of reasons to create, one of my main reasons for creation is just to express myself. Many people that personally know me will know me as a quiet, shy, keeps-to-herself person. It can be hard to express one’s self when a voice is so quiet. To really make a statement is to create things and images that speak more than a thousand words.”

She also added, “I have a love for helping causes that benefit and give back to something I value the most, which is mother earth. I have a lot of bird art because I love birds.”

Jaimee donates a portion of her art to animal conservations and foundations supporting endangered wildlife. “It is important to restore and protect other living creatures that share our planet with us. It wouldn’t be the same without them.”

Jaimee’s activism also translates to creating custom Dream Catchers. “I started to make my own at around age 15. I’d been looking to purchase a dream catcher for myself, but none of the dream catchers I saw interested me. I got the idea to make my own the way I needed to.”

Despite starting her journey in the digital arts, Jaimee mentioned, “A lot of my creations are nature-based. You’ll see a lot of elements from nature in my work. Whoever sees or purchases one of my creations will be a little bit closer to the natural world and have a little bit more magic in their life.” 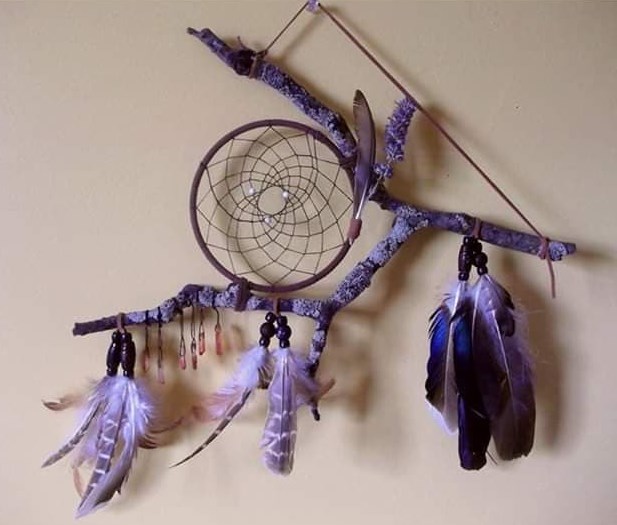 Regarding helping and supporting endangered wildlife, Jaimee emphasized that “it isn’t very hard to do. We are in the time of the sixth mass extinction on earth. Wildlife is dying out due to habitat destruction, overhunting, toxic pollution, and climate change.”

As to how to combat these issues, Jaimee clarified, “There is a lot we can do to help and support the people and the animals being affected by this problem. And by people, I mean the biologists, the care takers in the sanctuaries, the ones doing all the hard work and all we need to do is support their ongoing dedication.” 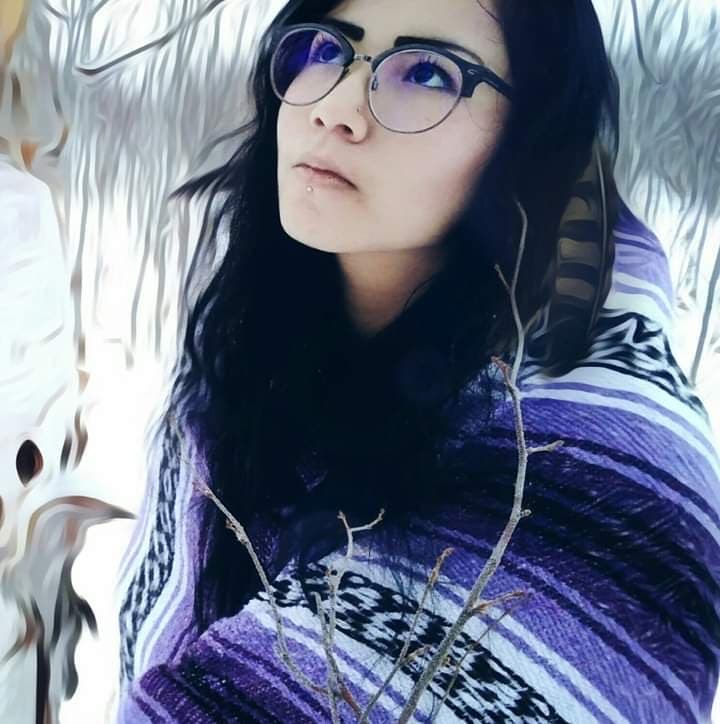 Be the first to comment on "Feature artist for May 2020: Jaimee Hele-Cardinal"