(ANNews) – The beautiful and breathtaking image on the cover of the June edition of Alberta Native News is by the incomparable Norval Morrisseau (1931-2007), creator of the Woodland School of art and considered by many to be the grandfather of contemporary Indigenous art in Canada.

The image is entitled “Children of Light and Sound” and it is a serigraph dated 1981. It is part of the Art Gallery of Alberta collection and was purchased with funds from the Art Associates of the Edmonton Art Gallery.

Norval Morrisseau was a prominent member of the Indian Group of Seven, about whom much has been written. He is best known for using vibrant colours in his figurative images delineated with heavy black lines. He liked to portray traditional stories, spiritual themes and political messages in his art and characteristically signed them with the syllabic spelling of Copper Thunderbird, the name given to him by his grandfather.

Morrisseau completed many commissions during his career including the mural for the Indians of Canada Pavilion at Expo 67. He was made a member of the Order of Canada in 1978 and, in 1980, received honourary doctorates from both McGill and McMaster universities. In 1995 Morrisseau was honoured by the Assembly of First Nations. 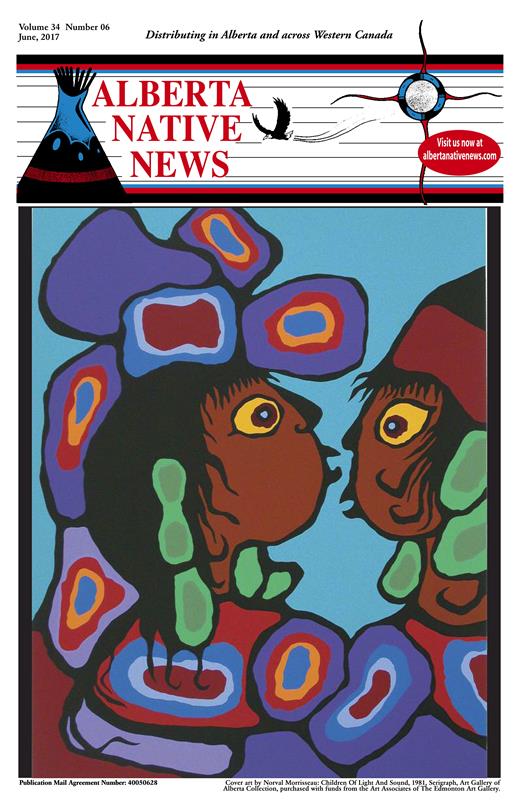 The Art Gallery of Alberta, located in downtown Edmonton, is a centre of excellence for the visual arts in Western Canada, that is focused on the development and presentation of original exhibitions of contemporary and historical art from Alberta, Canada and around the world. The AGA also offers a full-range of art education and public programs. Founded in 1924, the Art Gallery of Alberta maintains a collection of over 6,000 objects and is the oldest cultural institution in Alberta and the only museum in the province solely dedicated to the exhibition and preservation of art and visual culture.

The beautiful AGA building was designed by Los Angeles architect Randall Stout, and opened to the public in 2010.  The 85,000 sq foot facility features three floors of premiere exhibition space; the City of Edmonton Terrace; the Singhmar Centre for Art Education; Zinc restaurant; Shop AGA; Ledcor Theatre and an Art Rental and Sales Gallery.

Click here for information about current and future exhibits at the Art Gallery of Alberta.

Be the first to comment on "Feature artist for June 17: Norval Morrisseau"