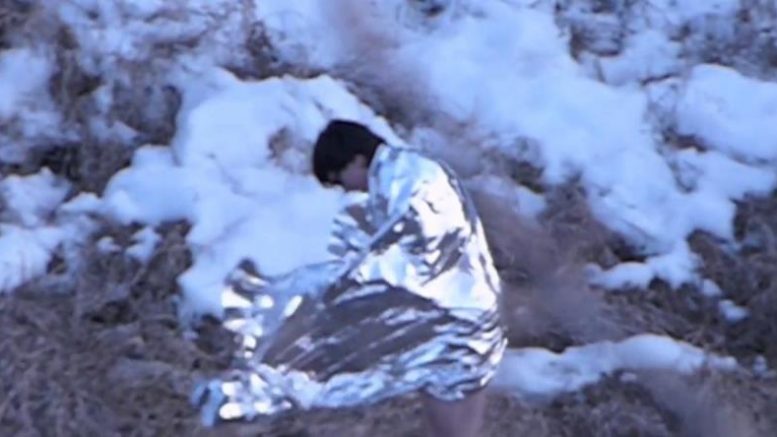 Daniel Cardinal McCartney (still) - 'Disruption from the Family Care' - HD Video, courtesy of the artist - can be viewed at the Art Gallery of Edmonton as part of the 'Fix your hearts or die' exhibit.

(Edmonton) – Fix your hearts or die is a new chapter acquisition project that will be on exhibit at the Art Gallery of Alberta until August 18, 2019.

The exhibit is a call to action wherein the stasis of maintaining the status quo is equivalent to death, either metaphorical or real. It is a call to viewers to engage with difficult or challenging topics and the complex intersections that are present for Indigenous artists. Fix your hearts or die features the art of four talented artists: Cheryl L’Hirondelle, Daniel Cardinal McCartney, Sheri Nault and Adrian Stimson.

The title Fix your hearts or die stems from the 2017 continuation of the cult television series Twin Peaks. In it, FBI Agent Gordon Cole (played by David Lynch) confronts fellow agents when they make transphobic comments out of earshot about Agent Denise Bryson, a trans woman (played by David Duchovny). The transphobic agents assume Agent Cole’s complicity in their comments and are shocked when he instead admonishes them loudly to “fix your hearts or die.” Although the casting of Duchovny as a trans woman is problematic, the message is clear: silence in the face of discrimination is stasis, the death of existence on a spectrum. The call is even more urgent for marginalized persons where death is not simply a metaphor.

Many Indigenous men, women, queer, and trans people have paid with their lives for their existence. The artists in Fix your hearts or die grapple with these histories and make space to be who and how they are and to project this being into the world, for themselves, for their communities, and for future generations. 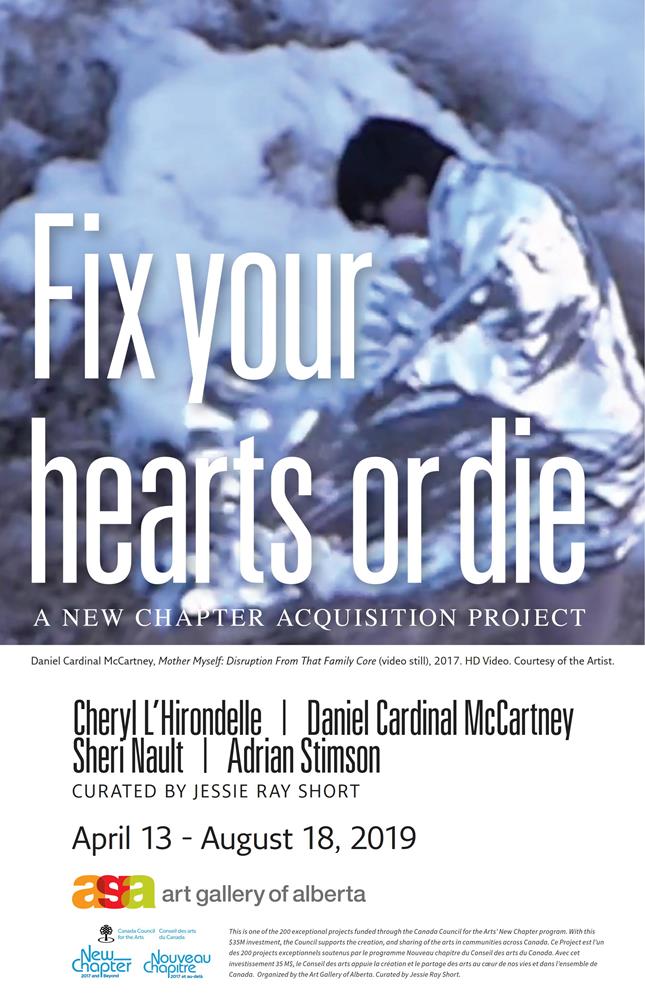 This is one of the 200 exceptional projects funded through the Canada Council for the Arts’ New Chapter program. With this $35M investment, the Council supports the creation, and sharing of the arts in communities across Canada.

Cheryl L’Hirondelle is an award winning and community-engaged interdisciplinary artist, singer/songwriter and critical thinker whose family is from Papaschase First Nation / amiskwaciy wâskahikan (Edmonton) and Kikino Metis Settlement, Alberta. Her work investigates and articulates the intersections of nêhiyawin (Cree worldview) and contemporary time-place incorporating sound, Indigenous languages, music, and old and new technology. In Fix your hearts, Cheryl uses a prospector tent, projection, and sound to create a space where alternate cognitions and a self-determining existence as a self-described half-breed woman exhibits and transmits unconventional, seer-like illuminations.

Daniel Cardinal McCartney graduated from the Alberta College of Art + Design in 2016 in Drawing. He is based in Calgary and is a board member of Stride Gallery. His maternal family is from Fort Chipewyan, Alberta although he was raised in Fort McMurray. His maternal blood lines are a proud mix of Mikisew Cree, Suline Dene, and Métis. As a two spirit, transmasculine person, Dan sifts through questions of blood memory and inter- generational trauma. His main media is mixed media collage, performance, and video. In this exhivit Daniel lays bare the disruption of his family due to the damaging effects of residential school and connects this history to his gender identity and ongoing discrimination.

Sheri Nault is an artist of Métis and mixed European descent. Situated within personal and political contexts, their art practice and research are grounded in queer, feminist and Indigenous world-views. They strive to elicit a sense of social and ecological responsibility and intimacy on a damaged planet, recently focusing on connections between bodies, sexuality and nature. They were a member of the 2017 cohort of the Intergenerational LGBTQ Artist Residency; and the 2019 Indigenous Art residency Ghost Days at the Banff Centre for the Arts. In an act of great care, Sheri Nault adorns natural materials with beads, human hair, and bondage rope to connect themselves as a queer Indigenous person to the natural world.

In Fix your hearts, Adrian Stimson dissects and re-imagines a violent engraving from the 1500s by Theodore De Bry as a series of paintings wherein smiling nude Indigenous men hold puppies while observed by Spanish conquistadors, rather than being torn apart by dogs, as in the original work.

Adrian, a member of the Siksika (Blackfoot) Nation considers himself as an interdisciplinary artist; he exhibits nationally and internationally. His paintings are primarily monochromatic, they primarily depict bison in imagined landscapes, they are melancholic, memorializing, and sometimes whimsical, they evoke ideas cultural fragility, resilience and nostalgia.

His performance art looks at identity construction, specifically the hybridization of the Indian, the cowboy, the shaman and Two Spirit being. Buffalo Boy, The Shaman Exterminator are two reoccurring personas. He is also known for putting his body under stress. His installation work primarily examines the residential school experience.

Fix your hearts or die is organized by the Art Gallery of Alberta and curated by Jessie Ray Short, an artist, filmmaker and independent curator whose cross disciplinary practice involves memory, visual culture and Métis history.

The Art Gallery of Alberta has a prominent location in the heart of the Arts District in downtown Edmonton, connecting  the gallery and the community, welcoming visitors to experience art first hand. It is a world-class centre for the presentation of regional, national and international art, education and scholarship. The 85,000 sq. foot building, which opened in 2010, is itself a work of art that solidifies Alberta’s Capital as a world-class city. For information visit youraga.ca.

Feature artist for May 2019: Delreé Dumont