(ANNews) – Two years have come and gone since the Truth and Reconciliation Commission’s (TRC) Closing Ceremonies in Ottawa drew attention to the 94 recommendations (calls to action) contained in the Final Report of the TRC.

On this second anniversary date, Edmonton again initiated a week-long series of events from May 28 to June 3, 2017 to reflect, educate, promote and encourage the continuing process of reconciliation. It is a movement that is national in scope and involves innumerable communities throughout the country and all sorts of citizens ranging from Aboriginals to non-Aboriginals from all walks of life.

In Edmonton, commencing on Sunday, May 28, Reconciliation Week kicked off with a film screening of “All our Father’s Relations” at the Metro Cinema Theatre in southside Edmonton. Metro has become quite a mecca of cultural activities due to its great location and the excellent films that are featured there including a large number of films and events that are about or by Aboriginal filmmakers.

On behalf of the City of Edmonton, Councillor Scott McKeen accepted some beautiful art work by the students.

The presentation also included clips from “The Secret Path,” an animated film adaptation of Gord Downie’s album and Jeff Lemire’s graphic novel. Working with Downie’s poetry and music, Lemire has created a powerful visual representation of the life of Chanie Wenjack. Guests also got a preview of the upcoming project “Our Secret Path” which chronicles the work of reconciliation across Canada that was ignited by Gord’s project.

Another film screening, on the third day featured, “Connecting to Camsell” (a tuberculosis hospital in Edmonton) at the River Cree Resort and Casino on the Enoch Reserve. All the film screenings included question and answer periods following the conclusions of the films.

The annual Alex Decoteau Run at Rundle Park in northeast Edmonton transpired on June 1st and involved scores of students from the city’s school system. The event was co-sponsored by the Edmonton Police Services and school systems and is dedicated to Decoteau, Edmonton’s first Aboriginal police officer who was killed during World War 1 and who was, himself, a champion runner. 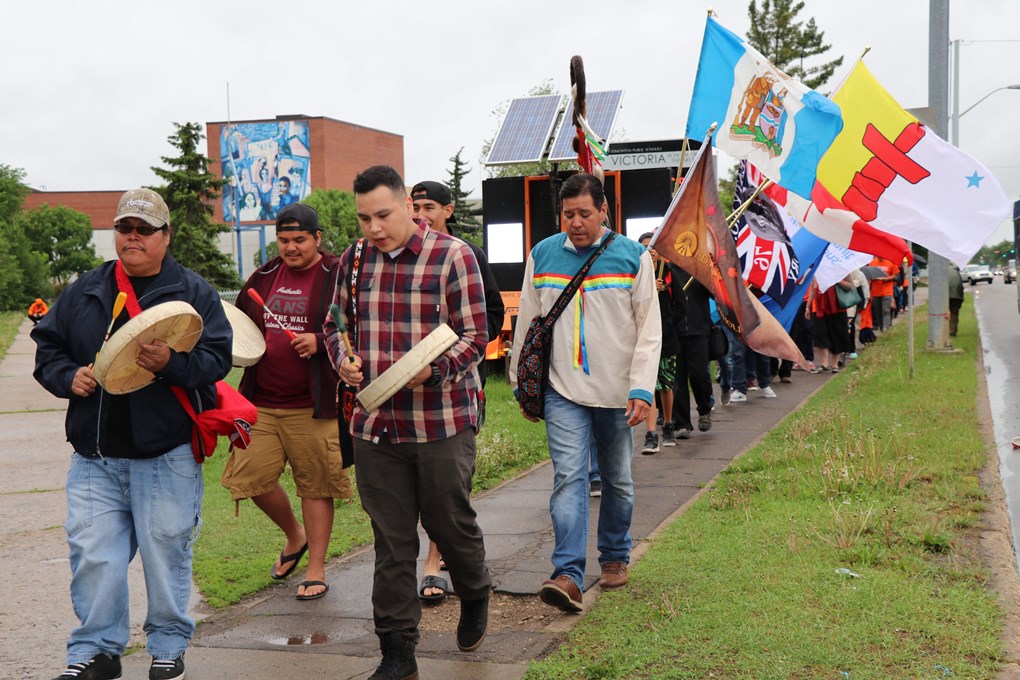 The recently published book, “In This Together” was the subject of Day 5 at City Hall School and included various discussions surrounding issues of truth and reconciliation in Canada. In the evening, Pecha Kucha Night at the downtown Citadel Theatre focused on looking into Canada’s next 150 years – engaging youth, sustaining the environment and building a diverse and inclusive nation as well as reconciliation processes.

Friday, June 2, opened one’s eyes to matters of reconciliation in education, with a presentation about Metis Children in Residential Schools. This was followed by what has become an annual Reconciliation Walk, starting from the Public School Board Building on Kingsway Avenue and travelling to Sacred Heart Centre for a brief gathering before proceeding on to City Hall for some speeches by officials and a civic proclamation celebration commemorating reconciliation.

When the walkers were marching past Victoria School dozens of youth sporting orange reconciliation-colored t-shirts lined the sidewalk and shared smiles, cheering, “thank you,” and high-fives! 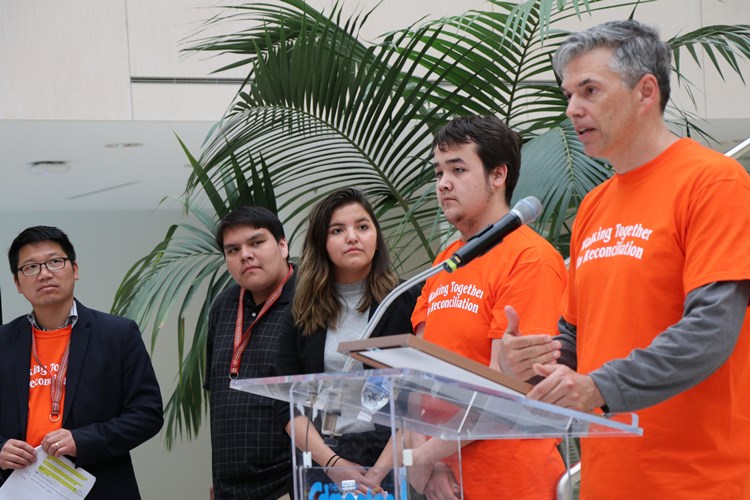 EPSB Superintendent Darrell Robertson committed to furthering the cause of reconciliation.

Edmonton’s Public-School superintendent, Darrell Robertson, informed the gathering that his department is committed to furthering the cause of reconciliation and assured those in attendance that what transpired in the residential schools and the consequences of that system is being addressed by today’s education departments and incorporates inclusion in the education curricula.

On the final day, June 3rd, a “blanket exercise” was conducted at the Federal Building Plaza in downtown Edmonton that witnessed a blending of Aboriginals and non-Aboriginal participants of all ages mix and mingle while learning about the legacy of residential schools and the traumatic impacts of a system that went dreadfully wrong.

Overall, the week-long events opened eyes, opened minds, opened hearts and brought people together in such a manner as to encourage, promote and foster awareness and understanding of reconciliation as an important process.

The positive focus has definitely been a consequence of the reconciliation efforts by the TRC and supporting groups, organizations and services throughout the country.

A primary objective, of course, is the bridging of races and cultures throughout Edmonton, the province of Alberta and the nation we call Canada, our home and “Native” land.

It should also be mentioned that Reconciliation Week was preceded on May 18 by a day-long conference entitled ‘What’s so funny about Reconciliation.’ Sponsored by the Creating Hope Society of Alberta, the gathering brought together Elders and seniors from both the Aboriginal and non-Aboriginal community.