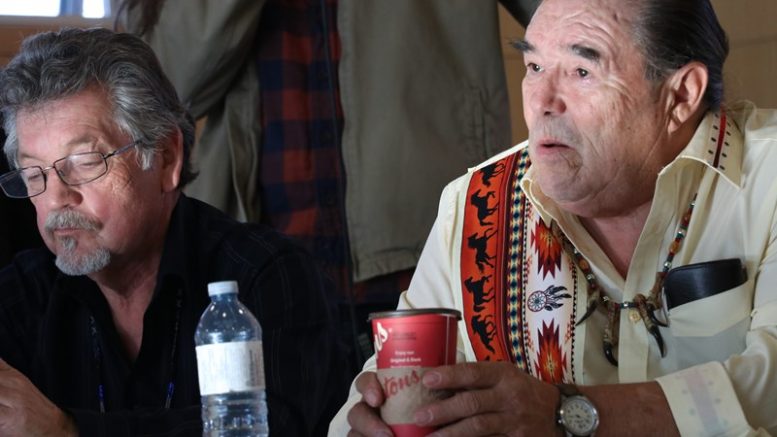 Will Campbell (left) and chairman Howard Mustus address the Grand Council of Elders on October 30 while planning phases of the Kihciy Askiy (Sacred Earth) project in Edmonton's river valley. (Photo by Terry Lusty)

The end of October saw another Grand Council of Elders Gathering as dozens of Edmonton Elders and spiritual leaders met and discussed further plans for Kihciy Askiy (Sacred Earth), a 2.5-hectare plot of city land that runs alongside Whitemud Freeway and Fox Drive (by the old Fox Farms site) just south of the entrance to Fort Edmonton Park.

Over many years there were expressions at the community level of the need for a wilderness-type setting where the Indigenous community could conduct traditional and ceremonial practices. The message couldn’t be louder or clearer – the people wanted a sizeable space that was mostly green space and could accommodate sweat lodges, tipis, medicine gardens, cultural teachings, gatherings for ceremonial events and round dances, and more.

But what they really wanted, was not only special space but green areas removed from the concrete, steel and neon lights of the city. Land that had some cleanliness about itself. The river valley area of Whitemud Park, near Fort Edmonton seemed an ideal and logical compromise. It is also part of the river valley where Indigenous people met and gathered in more historic times – possibly because the vicinity also possessed yellow ochre that was much used for ceremonial purposes. It’s been some years – about a dozen – since Native Counselling Services of Alberta (NCSA) took the matter to heart and partnered with the city of Edmonton to put the wheels in motion.

Several Elders were approached, jumped into the mix and the ball started to roll . . . . a bit slowly at first but the momentum was forward. Additional Elders were sought out and asked to participate in circles that addressed a huge variety of associated elements – site location and management, usages, programming, security, permanent structures on site, keeping the site ‘clean’, zero tolerance issues, staff training, protocols, etc.

This core body were the basic ‘movers and shakers’ who, in cooperation with NCSA, met and dialogued with the city to move the concept forward.

As early as 2006 Edmonton City Council had a proposal from the Edmonton Indigenous Resource Council requesting the development of a permanent, yet somewhat natural site, where Indigenous traditions and learning experiences could transpire.

Three years later the Whitemud Area Integrated Concept was formally amended to incorporate the concept of what became referred to as Kihciy Askiy – Cree for Sacred Earth.

No financial support was forthcoming until 2014 – the year of the 7th and final National TRC Gathering, that was held in Edmonton. Politically, the time couldn’t have been better. Edmonton had a mayor in Don Iveson who was committed to the reconciliation process and what better way to ‘walk the talk’ than to support a major endeavour like this that would aid in repairing old wounds, bring some closure and provide an opportunity to reinstate and recognize the culture and traditions long lost when swallowed up by the Indian Residential School system.

Because this also touches on the reconciliation process, the doors to Kihciy Askiy are open to all people regardless of ethnicity, religion, etc.  It is a two-way street on which Native culture and traditions are part of the learning and education curve for all to enjoy.

City Council approved two million dollars in its 2015 – 2018 capital budget deliberations for the design and construction of the first phase of Kihciy Askiy.

The old Fox Farm house, barns and corrals which the city had acquired back in 1968 were demolished, hazardous material minimized, and the site was regraded.

In May of 2015, dozens of Edmonton area Elders responded to calls from NCSA, gathering at the old Fox Farm location as the Grand Council of Elders.

The city approved an additional half-million dollars in 2016 to develop the access road to the site and another $1.26 million to complete Phase 1 through its Supplemental Capital Budget Adjustment.

By the summer of 2018 the city approved the Environmental Assessment Impact and Site Location Study. The City Design Committee further approved the Development Permit application via Manasc and Isaac Architects Ltd. which was working on the designing of Kihciy Askiy.

And, so, it’s been a long and gradual process to this point in time and the more recent Grand Council of Elders gathering in late October that fine-tuned a lot of its earlier discussions at the Alfred H. Savage Centre.

The Grand Council also developed ethical standards and protocols, especially for ceremonial purposes while providing an understanding of such ceremonial and spiritual needs of the Indigenous community in the Edmonton Capital Region.

Should all go “according to Hoyle,” Kihciy Askiy will celebrate an opening sometime in the fall of 2020. That’s just a year and-a-half away!