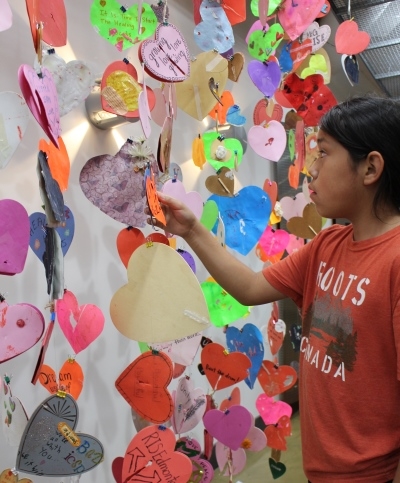 (ANNews) – The Alberta Teacher’s Association and its various partners kicked off a Week of Reconciliation with an early morning Pipe Ceremony and a breakfast at the Edmonton Marriott Hotel on the River Cree Resort early in the morning of Monday May 30. The activity was designed to “ground everyone is a good way with a collective spirit of working together.”

“The events, projects and safe places being created in the name of reconciliation in city schools is shaping our future leaders for change,” said Mayor Don Iveson. “The understanding and respect for our shared history is critical in continuing to build positive relationships with Indigenous Peoples and communities.” 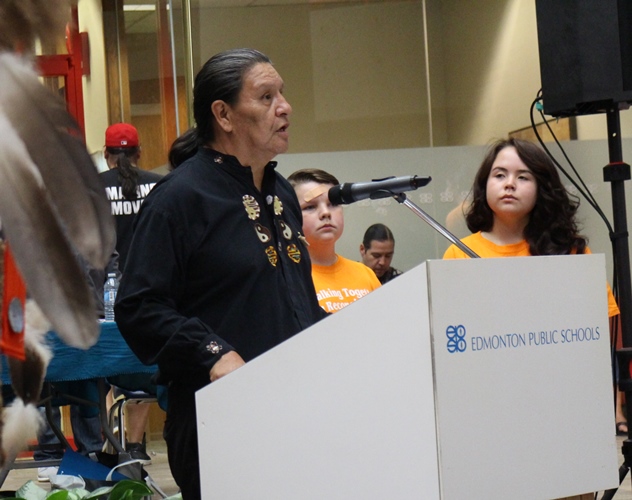 On June 2, 2015 the Truth and Reconciliation Commission (TRC) reached the end of a six-year journey that saw several Commissioners, including those who brought the task to fruition, Honourable Chief Justice Murray Sinclair, Chief Willie Littlechild and Dr. Marie Wilson, listen to and record the statements of more than 6,750 victims and survivors of Indian Residential School abuse. The TRC’s Final Report is more than two million words long; the six volumes of work are being translated into six Indigenous languages. Health, education, languages, justice, public inquiries, monitoring and funding are among the top on the list of recommendations.

Among the calls to action recommended in the TRC’s Final Report was the need to incorporate the legacy of Indian Residential Schools into the school curriculum, a necessity if Canadians are to be educated on the trauma and impacts experienced by Indigenous peoples. 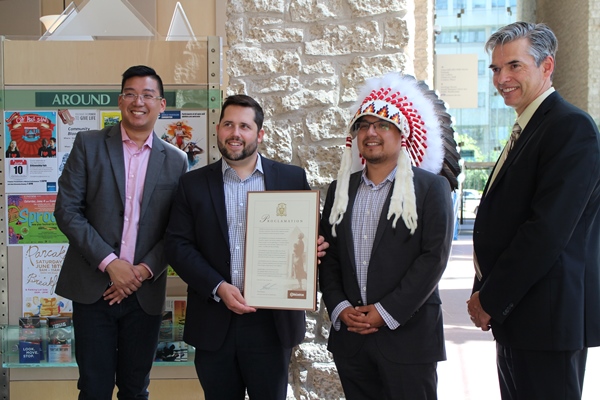 The City of Edmonton and both the Edmonton Public and Edmonton Catholic School Boards issued a proclamation honouring the principles of reconciliation and commending the recent curricular changes that have been made. Photo by Terry Lusty

“In partnership with the City of Edmonton and sister board Edmonton Public, we are proud to continue the momentum of “Walking Together” in this very special week of Reconciliation in Education,” said Superintendent Joan Carr of the Edmonton Catholic School Board. “As our partnership developed in 2014 when the final National Truth and Reconciliation Conference was held in Edmonton, we made a commitment to continue to support one another to build a stronger community for all of our students and their families. Edmonton Catholic School District is honoured to come together today as a community to commemorate the past, and to celebrate our future – a future of reconciliation in education.”

The Final Report pinpointed 94 calls to action in addressing the legacy of the schools that did much to decimate Canada’ Indigenous societies. The recommendations, noted Commission Chair Justice Murray Sinclair, are just the tip of the iceberg when it comes to reconciliation. Canadians, he said, need to act and they need to make certain that government heeds the recommendations set forth by the Commission.

“Starting now,” emphasized Sinclair, “we all have an opportunity to show leadership, courage and conviction in helping heal the wounds of the past as we make a path towards a more just, more fair and more loving country.” 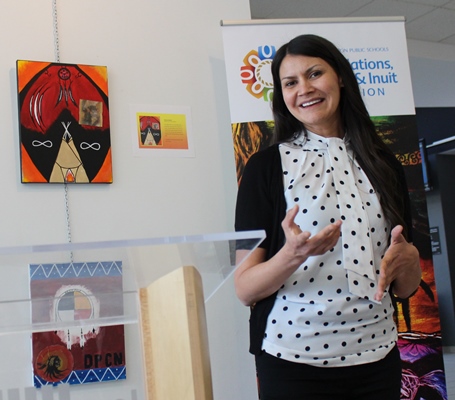 The Reconciliation Artwork Exhibit was described by Melissa Purcell at the Stanley Milner Edmonton Public Library. Photo by Terry Lusty

“At Edmonton Public Schools, we’re committed to creating school communities that allow healing and reconciliation to happen, where positive relationships can flourish and all students and staff, regardless of their background, feel safe and confident,” said Edmonton Public Schools Superintendent Darrel Robertson. “The District’s First Nations, Métis and Inuit unit provides supports to educators so we can foster meaningful classroom conversations about residential schools and reconciliation.”

Another event that took place in the city during the Week of Reconciliation (May 30 – June 6) included a display in the main lobby of the Stantec Centre that told a story of reconciliation via a combination of artistry and city history.

On May 31 the Boyle Street Plaza hosted an interactive audio installation about what it means to be Indigenous in Edmonton, a presentation that shared stories of neighbours, friends and colleagues in reconciliation. 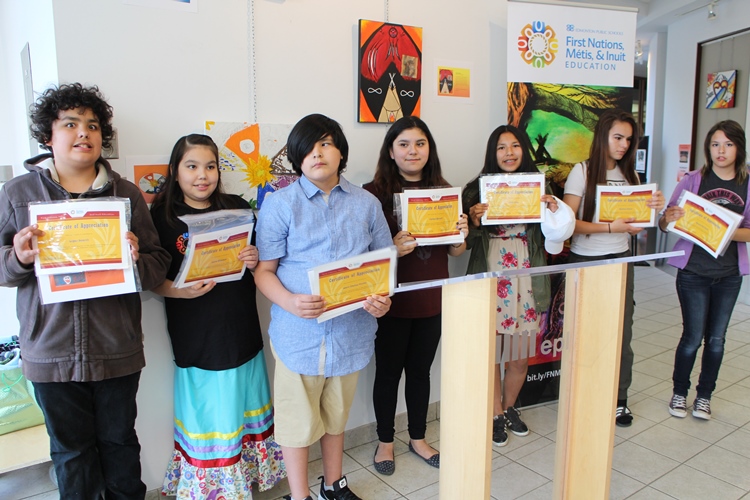 On June 1 the front foyer of the Stanley A. Milner Edmonton Public Library saw Junior High students from various Edmonton Public Schools take part in the First Nations, Métis, and Inuit Junior High Art workshop with Artist in Residence, Holly Rae Yuzicapi. Students utilized acrylic paint and mixed media, including traditional arts to create artwork incorporating the Truth and Reconciliation Commission: Calls to Action and the United Nations Declaration on the Rights of Indigenous People. The exhibit will be on display until June 22.

On Thursday, June 2 a Mass Blanket Exercise took place in the City Room at Edmonton City Hall. Since the release of the Truth and Reconciliation Commission’s Calls to Action in 2015, RISE has been working with a network of organizations across the country to host a mass Blanket Exercise. This was an interactive learning opportunity to share Canada’s history from an Indigenous perspective. 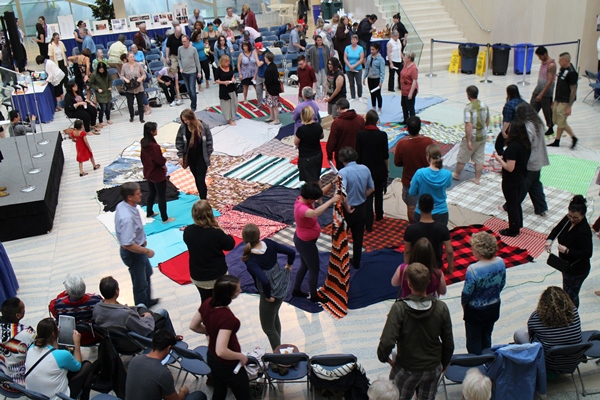 A Blanket Exercise was held to demonstrate the impact of discrimination. Photo by Terry Lusty

On June 2, the Nina Haggerty Centre for Arts featured the work of 21 junior high school students from the Montana First Nation’s Meskanahk Ka Nipa Wit School. Photographs taken by the students were used to create the book, HONOUR and will also be featured in a photography exhibition at the Nina Haggerty Gallery in Edmonton.

Through the eyes of students at Meskanahk Ka Nipa Wit School Youth, visitors were better able to understand the impact of systemic and individual discrimination. The students, who said “We made this book to see and be seen,” confronted and challenged the narrow and often misguided understanding that surrounds who they are as First Nations Youth.

The Centre for Education, Edmonton Public Schools hosted an event on June 3 to celebrate the anniversary of the Truth and Reconciliation Commission closing ceremony at Rideau Hall. The one hour event included prayer, songs, heart garden planting, gestures of commitment to the Reconciliation Commitment Box, unveiling of the Statement of Apology to Indian Residential School Survivors, opening of the 100 Years of Loss Exhibit, and more.

Other events that took place on June 3 included one at the City Room in Edmonton City Hall and another at The Stanley Milner Edmonton Public Library Theatre – Lower Level. The first of these celebrated the ongoing efforts within the Edmonton Public and Edmonton Catholic School Boards to incorporate reconciliation and education on Edmonton’s Indigenous history. Four Edmonton schools have reconciliation school projects on display at City Hall. The second, at the Stanley Milner, included part of their “Exploring Reconciliation” series by providing a film screening of “Elder in the Making,” a film the gives Edmontonians an opportunity to gain a better understanding of ‘reconciliation’ and what it really means.

The City of Edmonton and its partnering organizations and institutions are not alone when it comes to supporting the reconciliation movement; in fact, hundreds of thousands of Canadians who understand and support the TRC’s calls for action are on board and working hard to ensure that the needs and supports so often denied Indigenous Canadians ends and never repeats. Edmonton City Council is stepping up to the plate and making a positive difference in what has been a long and difficult road; indifference and marginalization are beginning to fade as eternal hope and a gradual movement to awareness prevail.