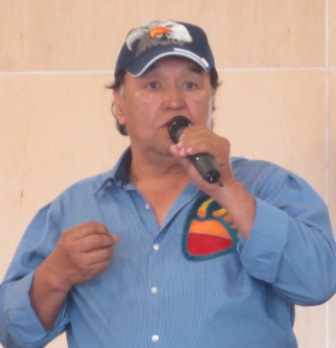 For many years there has been a small core group of Aboriginals in Edmonton who have attempted to establish some form of sacred territory in or near the city of Edmonton. The object of their efforts which have included meetings and overtures to the “city fathers” has been to provide a rather isolated wilderness-type of area where Aboriginal traditions and ceremonies (i.e. sweat lodges, smudging, etc.) could flourish.

Lewis Cardinal, Wil Campbell, and others have been major catalysts in this scheme of things. Over time they have drawn in other players and interested parties including the voices of Elders Jerry Wood, Johnny Ermineskin, Charles Wood, Marilyn Buffalo and Fred Campiou. The list goes on and on and continues to grow. 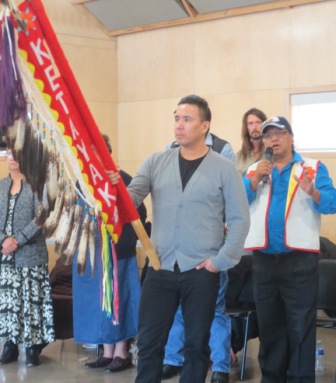 Facilitator Fred Campiou addresses the delegates of the Elders Counsel while Conway Kootenay holds the Eagle Staff.                Article and photos by Terry Lusty

On May 6 and 7 the above-mentioned and dozens more made their way to attend the Elder’s Grand Counsel meeting about the Kihciy Askiy (Good Earth) project at the south end of the University of Alberta campus grounds by Fox Farms and the Whitemud Freeway. It is an area that has now been set aside by city council for those expressed purposes.

The organizing for this sacred land area is now under the jurisdiction of Native Counselling Services of Alberta (NCSA) which has a two-year window to plan and develop the land.

Campbell mentioned that two million dollars has been earmarked by the city to help move the plan along, to clean and develop the site.

Not wanting to bypass representatives of the Aboriginal community, in particular Elders and leaders, the Elder’s Grand Counsel gathering was charged with discussing and planning the process including identifying the first priorities as well as the other considerations that require addressing.

The meeting started with proper protocols such as prayers, smudging, introduction of those present and a brief explanation of what the gathering was all about. Facilitating the activities and discussions of the day was Elder Fred Campiou who was assisted by longtime involved colleagues Lewis Cardinal and Wil Campbell.

Cardinal explained that the seeds were planted a number of years ago when Alberta first hosted the Knowing Our Spirits Worldwide conference at Poundmaker’s Lodge in St. Albert. Actually, the concept of developing a major Indian Cultural and Education Centre, was proposed by the now-defunct Indian Association of Alberta back in the mid-1970s.

Over time it became obvious that there was a very real need to have a “natural setting” for ceremonies. In this respect, the Whitemud area is ideal, explained Cardinal in that it possesses historic significance as a former gathering area for Aboriginals  and it is naturally blessed with deposits of ochre.

Elders wait for their closing prayer at the recent Elder’s Grand Counsel gathering in Edmonton’s river valley near the Fox Farms and Whitemud Drive.

Cardinal acknowledged those present in particular the Elders and leaders who responded to a call to attend this important gathering. What made their presence even more special, he stated, was the small storm that descended on the city early in the morning.

“Despite the morning storm,” he said, “I wondered but knew that people who needed to be here would be here.”

He gratefully acknowledged that former Edmonton Mayor Stephen Mandel “did a lot of work to make this happen.”

As Campbell and Cardinal talked it up in the community, others began jumping on board including Allan Benson, CEO of Native Counseling Services of Alberta, local Elders and several cultural advocates.

Marilyn Buffalo admitted, “We have so much work to do,” but this in itself, “is historical.” When we look within and consider the efforts of our Elders, most of whom have passed on, “all wanted a place where our children could learn their culture…Let’s work together, let’s make a difference for our children,” she said.

There’s a lot of educating that needs to be done, according to former chief, Howard Mustus. This applies to both Natives and non-Natives, he added. “Now we have an opportunity.”

“It is important to follow the teachings and to be role models,”  agreed Inuit Elder Peggy Richardson. This project, she believes, could help propel that notion forward for the future good of our youth.

Addressing the delegation of Elders near the end of the day, facilitator Campiou impressed the importance of establishing a “strong foundation so it will continue on for our children.” There’s a need to “re-establish our identity,” he stated. In doing so, he added, “We can’t be afraid, we must move forward.”

We are not doing this for ourselves, but for everyone. I’m very excited for this,” he concluded.

The second day of meetings involved breaking up into five or so smaller circles that addressed a variety of issues requiring attention.

In general, the circles addressed questions such as: how and what we need to build, what it will look like and what more needs to be done. The kinds of ceremonies and activities to be considered, the services and facilities required and what the first priorities should be were also addressed in the circles.

A follow-up Elder’s Grand Counsel gathering will be announced so the process can continue to move forward.