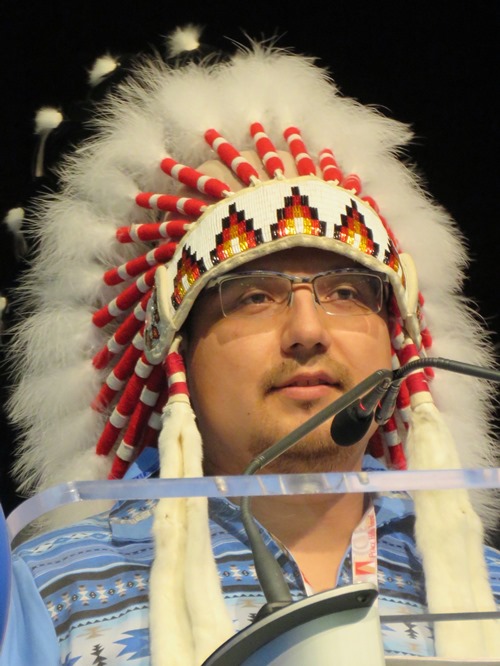 (ANNews) – The “Venue” at the River Cree Casino and Resort was a hub of activity on Friday, March 10, 2017 when the City of Edmonton and the Enoch Cree Nation gathered to set yet another precedent in the march toward reconciliation, goodwill, friendship and trust among neighbouring communities. That new precedent came in the form of a Memorandum of Understanding (MOU) between Edmonton and the Enoch Cree that will “build upon the strengthening of a government-to-government relationship for the social and economic benefit of current and future generations.” 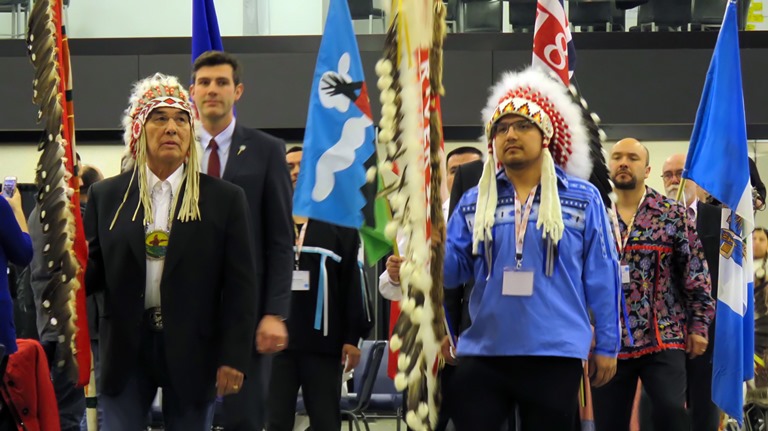 “It was a long day for all of the people involved in putting this MOU together,” noted event organizer, Corina Hollingworth. “Edmonton Mayor Don Iveson and members of City Council met with Chief and Council for a sweat and Pipe Ceremony on Thursday and arrived early on Friday morning to prepare for the workshop and MOU signing. Together with Chief William (Billy) Morin and members of the Enoch Cree Council, Mayor Iveson and his Council met to review, brainstorm and prioritize opportunities in a variety of themes, including health, culture, economic development, housing and poverty. The two groups worked diligently both before and after the signing of this important document and in doing so talked about the many goals the two groups have in common, especially as it relates to creating opportunities for future growth and partnership projects.”

Many people have to be applauded for the hard work they did to ensure that the day would be both successful and culturally in tune with the significance of the moment. These include Cultural Coordinator, Sandra Alexander; Don Ward Jr. for the outstanding job he did painting the drums, Jessie Morin for the work he did preparing the sweat lodge and hosting the Thursday afternoon sweat, one that Mayor Iveson called “a magical experience.” 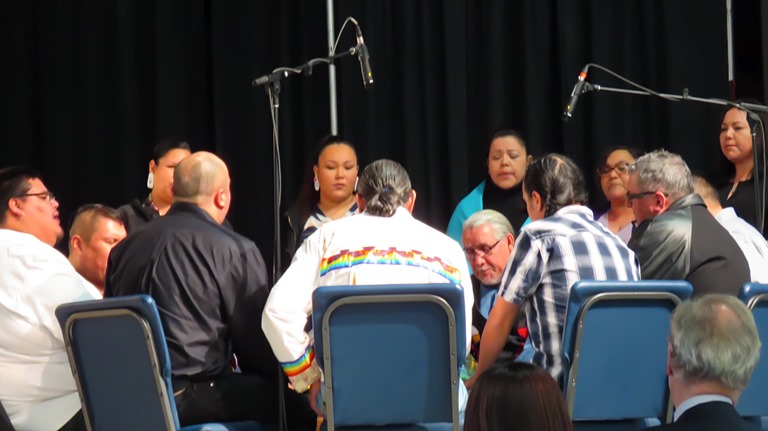 The sounds of the popular River Cree Singers Drum Group added a special ambiance to the room during the MOU signing.

Elder Bob Cardinal held the sweatlodge and delivered the Pipe Ceremony that both Edmonton and Enoch Councilors participated in. A special salute to Senior Manager of Economic Development and CEO of River Cree Development Corporation, Don Morin, for the ongoing and exceptional job he’s done in promoting the community and building its economic infrastructure.

Before the key speakers made their way to the podium to talk about the MOU and the successes the two communities already share, the 400-plus people who’d gathered in the large meeting place were treated to the drums and songs of the River Cree Singers, whose music greeted the long line of Grand Entry participants led by Treaty Six Grand Chief Wilton Littlechild, Mayor Iveson and Chief Morin. 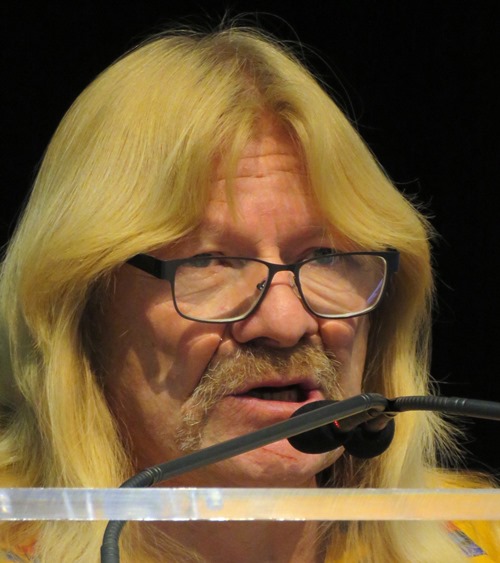 Enoch Cree Nation emcee Ken Ward then took to the podium to delight the audience with his repartee and expertly keep the event’s agenda moving along and on schedule.

To enhance the knowledge of those in attendance and to ensure that everyone had an understanding about what the MOU stands for, why it is important and what benefits can be derived by working in partnership, Chief Morin and Mayor Iveson appeared in a video presentation to talk about those benefits and the history that the Enoch Cree and the City of Edmonton have shared over the years. During the one-on-one video conversation both parties made it clear that 2017 signals a new and changing environment and by working together to achieve similar goals the city, the Nation and the region would all be benefactors. Both Chief Morin and Mayor Iveson commented on the friendship that has been developing for many years between Edmonton and Enoch; both said they wanted to do more to ensure that equal opportunity, economic growth and viable partnerships continue be the order of the day. 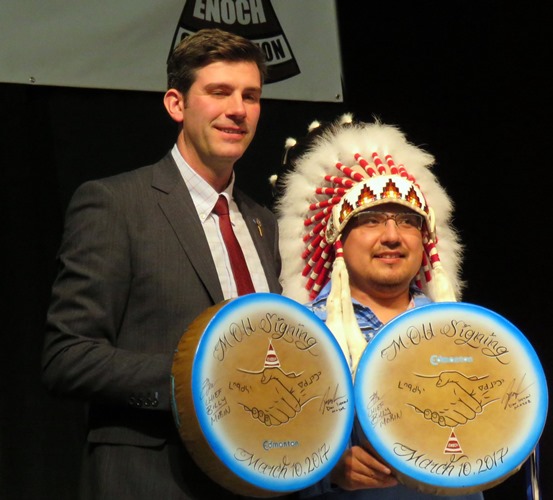 “During the past decade,” noted Chief Morin, “and especially since the River Cree Development, we have taken steps to improve our relationship with Edmonton and within the region. It’s really made us take that step forward toward our relationship with the community – taking a more responsible role for our members – not just for Enoch but for the Capital Region that we want to be contributors to.

“Our respective leaders are choosing to get out in front and be directors of change rather than sit back like the last 100 years when we kind of just lived beside each other. We don’t want to do that anymore; we want to work together and move things forward.”

Mayor Iveson noted that when he was a kid growing up in west Edmonton “there was an invisible line around Enoch. I think for many Edmontonians it was a place where they were not sure if they were welcome, not sure if they should come here.”

Iveson said there is no better time than now for change to take place.

“We are now setting about building a respectful government to government relationship between the City of Edmonton and Enoch First Nation in exactly the same way that we are working to build the same kind of respectful and collaborative relationships with our municipal partners in the region.”

He went on to add that more infrastructure and growth would be soon taking place in the city and particularly in the west end and throughout the county, something he said will be greatly enhanced by the two groups working together and with neighbouring Parkland County.

“The casino-resort is an integral part of the hospitality infrastructure in the region,” observed Iveson, who said that its “strategic location” would be very helpful in “creating and promoting tourism and other opportunities.”

He added that the logistics in west Edmonton were ideal for creating opportunities that will benefit the city, Enoch and Parkland County given that a solid infrastructure is already in place with more already underway and with much more room to grow.

Chief Morin emphasized “that this type of partnership is based on treaty, it’s based on breaking down those barriers and coming together in meaningful ways. Essentially that’s what this whole region is built upon – working and sharing and moving forward together. I acknowledge that the City of Edmonton has taken an holistic approach to economic development – not just business dollars and cents but people development as well.”

Long after the afternoon gathering was over and the crowd dispersed, the two groups continued to talk about the how they will work together for the betterment of the entire region. 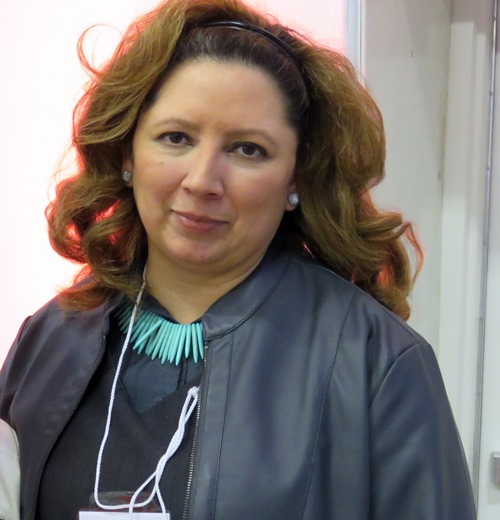 “Many ideas were expressed and a wide range of possibilities for the future were talked about,” noted Hollingworth. “Among those ideas is the possible creation of a duel-purpose track and field facility that could complement activities at the Butterdome and other sports facilities in the region. Health care is an important consideration and the creation of a new hospital was talked about, one that would embrace Indigenous culture, holistic healing and a centre to help people with alcohol and substance abuse issues. A variety of issues and possible joint ventures for the future were discussed and more meetings are expected to take place in the near future.”

Earlier in the day Chief Morin said that building a public hospital on the reserve would be a dream come true, noting that it could be “a place where the 100,000 people that are Aboriginal in the capital region can come and heal through our ways but at the same time walk through those same health doors alongside City of Edmonton, Parkland County and St. Albert residents. That can happen with partnerships like this.”

During the afternoon, Dr. Wilton (Willie) Littlechild was introduced to the podium where he spoke about the importance of working together.

“This is a special moment,” he noted.

“I want to commend all of our young leaders for their initiative. This Memorandum of Understanding is about implementing the Calls for Action of the Truth and Reconciliation and particularly the one that calls on all governments to use the UN Declaration as a framework for reconciliation.

“This is a momentous step in implementing true reconciliation and I commend both the City of Edmonton and the Enoch Cree Nation for including both the Treaty and the UN Declaration in your MOU. This is a government to government relationship and one that welcomes the next 150 years of Canada and the next 140 years of treaty.”

The memorandum grew from the 2016 Community Economic Development Initiative, a joint venture project between the Federation of Canadian Municipalities and the Council for the Advancement of Native Development Officers. The project supported First Nations and adjacent municipalities in their effort to identify and set a plan in motion that will ensure long-term economic co-operation.

“Coming together in a unified way solidifies our commitment to developing a strong and fair working relationship for the rights and benefit of all,” noted Chief Morin.

“This strengthened partnership in the Edmonton metropolitan region continues to honour the terms, spirit and intent of Treaty 6, while allowing for additional outcomes based on mutual benefit.”

Mayor Iveson acknowledged that statement when he said “this important step builds on the city’s Memorandum of Cooperation and Dialogue with the Confederacy of Treaty No. 6 First Nations, along with our participation in CEDI. It also sets a strong foundation for maintaining a cooperative government-to-government relationship with Enoch Cree Nation in the spirit of reconciliation.

“I am pleased to embark on new ways of working together for the benefit of current and future generations.” 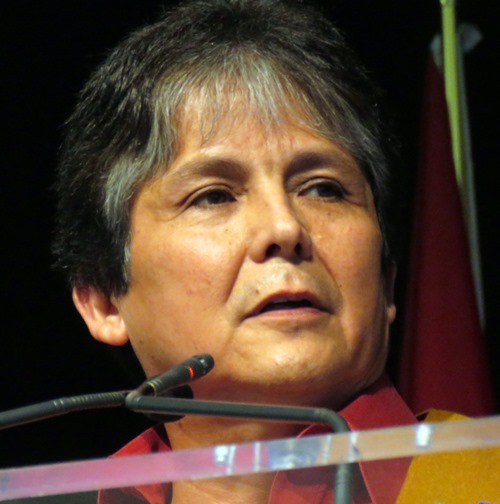 Keynote speaker Clarence Louis, Chief of British Columbia’s Osoyoos Indian Band addressed the gathering about the MOU and what it could represent for the future of the region. One of the most progressive Indigenous communities in Canada, the Osoyoos Indian Band has been led by Chief Louie, one of the most active and progressive leaders in Indigenous history for more than 30 years. The band controls more than 32,000 acres of land and has established many partnerships with the municipalities that surround his community. Chief Louie employs Indigenous people from more than 30 different communities, doesn’t tolerate laziness or lateness, doesn’t believe in welfare and ensures that everyone in his community who wants to work does work and as such the Osoyoos Nation doesn’t have an unemployment problem. He told those in attendance that the new MOU between Edmonton and Enoch was just the beginning of positive things to come.

“This is a baby step,” he noted, adding that “Enoch, just like Osoyoos, is breaking a trail for others to follow.

“In my 30 years as Chief I have had the opportunity to visit many First Nations communities to talk about our story of economic development and our story of getting back to our First Nation work and culture.

“The original treaty relationship was a business relationship (and) I firmly believe that we have to get back to that. I congratulate Mayor Don Iveson and Chief Billy Morin for the taking the necessary steps in ensuring that is now possible for the Enoch Cree.”

The MOU has been signed and though it is not a legally binding document it is obvious by the words and actions of the leaders, the speakers, the workers and spectators who gathered to see this historic paper signed on March 10, 2017, it is a very workable plan that in good time and in good faith will bring about a new era of understanding, cooperation, unified growth and prosperity throughout the region.

The Enoch Cree Nation (ECN) is a progressive and proud community bordering the City of Edmonton’s west side; its unique geographical location has allowed the community to become a leader in economic development among First Nations in Alberta and Canada. 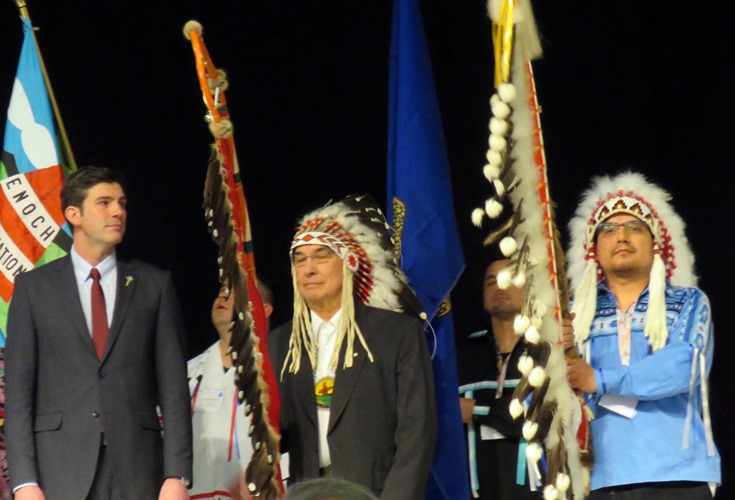 Edmonton celebrates with a week of reconciliation activities