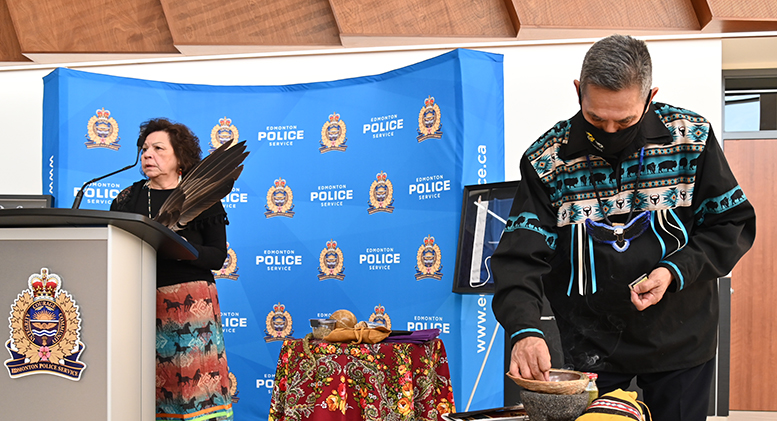 (ANNews) – Andrea Levey is an eight-year veteran of Edmonton Police Services as the Indigenous Relations Coordinator and current Indigenous Equity Advisor. Alberta Native News asked her to provide details on some of the measures that EPS has recently implemented to improve relations with Edmonton’s many Indigenous and minority communities.

There are a number of initiatives aimed at improving relations with Edmonton’s Indigenous communities, explained Levey.

“We are working more on systemic changes to our operations. One of the big initiatives is the Nîsohkamâkewin Council (the Act of Helping), which is a community-based council of Indigenous community members that essentially aid in the implementation of specific recommendations from the TRC, National Inquiry, Broken Trust Report and the Royal Commission on Aboriginal Peoples.”

Levey said that it is a really exciting time for EPS because they are in the midst of the selection process of new applicants for involvement in the Council. There were over 80 applicants, she said, “and they’ve all been really amazing. It’s such a challenge to narrow it down to only eight people.”

The road map has already begun to be created, added Levey.

The Council will work on each recommendation in alignment with the affected areas of EPS. For example, if it’s a Missing Person’s recommendation, they will work directly within that area to learn the current practices in place to understand the policies, the programs that are currently there.

“Then we start to look at the recommendations and the Council will let us know the best way forward – what is going to actually be meaningful for our community,” noted Levey.

“The council is going to be instrumental in making sure these recommendations are successful, valuable and done in a culturally safe perspective: a trauma informed perspective, an anti-racist perspective to make sure we have [as much information from our Indigenous community members] and are making things safe.”

EPS has moved away from a cultural sensitivity standpoint to more of a cultural safety standpoint, said Levey. “So recognizing it’s not appropriate to pinpoint specific cultures and say ‘this is what you do in this situation and this situation etc.’ because we have a very diverse community and need to be respectful of all communities.”

“We have an Indigenous police officer that facilitates it, and we talk about everything from 1500 BC colonization and the impacts,” she explained. “We look at legislation that has really impacted us as Indigenous peoples. We look at how those impacts have affected people in relation to police today. We have 500 years of history [to go through] but it’s a start.”

“The EPS has seen the lack of change that our typical arrest-remand-release cycle has had on our vulnerable populations,” she noted. “This cycle is also a strain on our frontline officers, who simply do not have the vast skill set to treat each community member’s specific needs. In response, EPS developed the HELP Unit – composed of police officers, civilian navigators from Boyle Street Community Services, and analysts with diverse experiences, along with the ability to create and maintain strong partnerships.

“It’s about accessing the system in a way that works for the persons you are working for and making sure they get the assistance they need. It’s a new off-ramping approach instead of going right to the criminal justice system.”

With cultural safety and equity, EPS is also implementing eagle feathers into the service for affirmation swearing. Last year the Alberta court system implemented eagle feathers as an option to swearing in on a bible.

“We’ve amended this to be more of an equitable policy, so it refers to sacred objects instead of the bible specifically for any of our communities,” said Levey.

“EPS also unveiled acknowledgement of Treaty 6 plaques in all of our divisions. The plaque also acknowledges Métis people as well as other peoples that have been here for centuries. The teaching is really important because we acknowledge but also have that understanding that we are here today because of that treaty.”

EPS has approximately 18 to 19 hundred officers. Alberta Native News asked: When an EPS officer shows insensitivity to culture or racism or bias, has the consequence changed at all in the last few years?

Levey explained that EPS is bound by the Police Act for police members which is under review right now – but this is controlled by the Alberta government. Currently, in order to make a complaint against a police officer, you go through the Professional Standards Branch who are bound by the Police Act in terms of how they conduct the investigation.

The challenging part is that the claim can only be made by the direct person involved, who experienced the incident. That can be a huge barrier that needs to be addressed and possibly amended.

EPS also conducts restorative justice circles – community circles to bring all the people involved in an incident, together. The goal is to try and understand the impact and learn all sides of the story, then come up with concrete actions that make everyone feel safe.

Levey urges people to advocate for changes to the Police Act in order to make change easier. Alberta Justice has done community engagement on changes and, according to Levy, one of the additional recommendations is more accountability in police conduct, like the addition of body and dash cams.

Jason van Rassel, Communications advisor to Alberta Justice and Solicitor General, stated that a response of where the Police Act review currently stands is in the works.

In February 2021, Alberta Justice appointed a special adviser, Temitope Oriola, associate professor of criminology at the U of A, to assist in the review process.