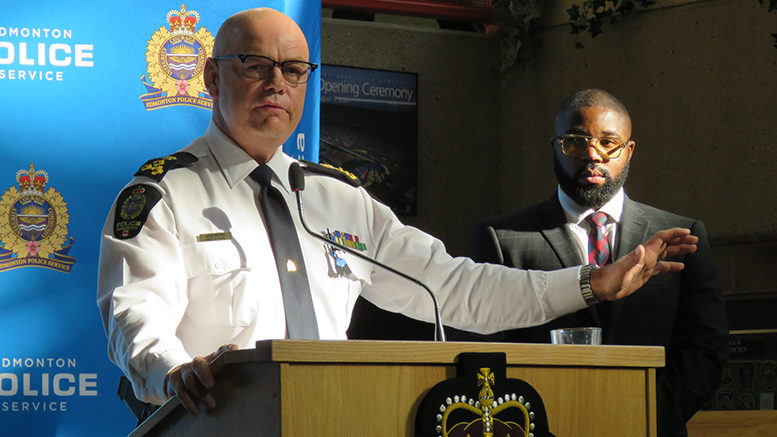 (ANNews) – On Monday September 21, 2020 Edmonton’s police chief Dale McFee announced a commitment to action by the Edmonton Police Service to engage with the city’s Black, Indigenous, racialized, and underserved communities in the hopes of improving policing.

“The murder of George Floyd launched a movement and a demand for action that required every police service in every city to look inward and ask themselves what path they wanted to take,” stated Chief McFee.“We have heard from community members and our own employees, where our actions and interactions have not been positive.

“In order to be the good and just people we know ourselves to be, we must acknowledge some uncomfortable truths, and ask ourselves what steps we are taking to hold ourselves accountable.”

The council was created after the Edmonton City Council held public hearings in June 2020 to better understand how Edmontonians viewed police.

“Racial injustice in our society is no longer a force we can collectively rationalize, study, ignore or worse yet — form another committee to assess.

“I think everybody, quite frankly, over the last number of years is just tired of talking,” he said.

“I’ve sat through enough of these inquiries and inquests throughout my career to know there are a lot of things we need to do as a collective group, as a community and as a police service, and it’s time to start taking some action. It’s not time to form another committee to study things.”

“As we have seen from demonstrations around the world, including Edmonton — we saw dozens of hours of testimony at city council — demand for social justice and systemic change is absolutely necessary. This call for change covers society as a whole, but much of it right now focuses on police services.”

“Today, we begin a new chapter of ongoing relationship building with these communities,” McFee said.

“I understand the skepticism some might bring to a statement like that. What makes this different from previous efforts is that this is not a listening campaign, it’s not a campaign at all. It will not end. This is part of our everyday work today and moving forward,” said the police chief.

The council will visit 50 communities over 15 months.

The efforts will be supported by what EPS calls its value and impact division, headed by Enyinnah Okere.