(ANNews) – On February 20-21, 2018 the Sutton Place Hotel in downtown Edmonton provided the venue for the 11th Annual Western Indigenous Consultation & Engagement (WICE) conference. The annual event, expanded this year to give participants more opportunity for interactive learning, improved networking opportunities and tools with which to build stronger relationships, was hosted by The Canadian Institute (CI), a Canadian owned and operated entity responsible for the creation of over 1,700 conferences since its inception in 1985.

The agenda got underway just after 8:15 a.m. when Elder Betty Letendre opened the first day of the conference with a traditional welcoming and Conference Chair Koren Lightning-Earle greeted the gathering, addressed the Elders and offered opening remarks about the conference and the significance of the event.

During the first day of the conference more than nine speakers addressed the gathering and discussed topics that included: Consultation Case Law, and updates on Alberta’s Consultation Office Policy; and an hour-long discussion that embraced both conversation and explanation on the interaction between Federal, Provincial and Community Consultation Policies. The afternoon sessions got underway with the topic: World Café Consultation, Engagement and Building Lasting Relationships, a 90-minute session that included managers, legal experts and Indigenous Initiatives Liaison Koren Lightning -Earle, a member of the Law Society of Alberta’s Indigenous Bar Association.

During the second day of the conference more than nine speakers addressed the gathering and discussed topics that included: First Impressions of Bill C-39 (David Laidlaw); Traditional Knowledge and Land Use Studies (Darryl Sowan); Keeping Up with Consultation Record-keeping (Jorge Avilés and Guy Shuhimller); Indigenous Governance and Self-Determination (Kluane Adamek) and others. 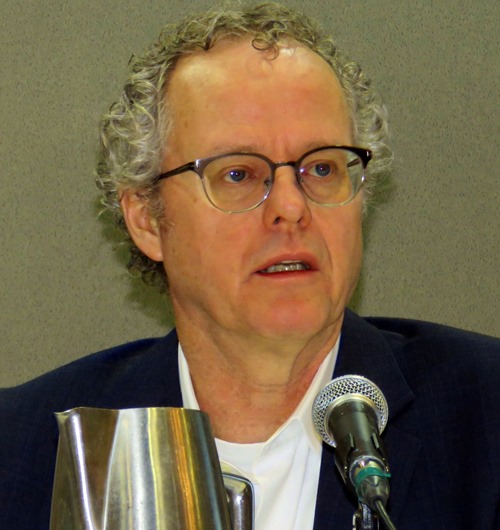 After opening remarks were delivered by Lightning-Earle, Brian McGuigan, the Manager of Aboriginal Policy for the Canadian Association of Petroleum Producers (CAPP) took to the podium and addressed the topic: Implementing the United Nations Declaration on the Rights of Indigenous Peoples (UNDRIP) – From Government to Business.

McGuigan talked about the responsibilities that CAPP has in enabling the responsible growth of the petroleum energy sector via the organization’s mission to “advocate for and enable economic competitiveness and safe, environmentally and socially responsible performance.”

He told the gathering that CAPP works primarily with small groups, “specialists who handle the (various) companies’ Indigenous relations work every day. We work together with them on the current issues that are facing the companies in their (respective) practice areas and with current Indigenous policy questions. We try to support the companies in how they think through those challenges and also act as a single voice to the industry about some of those policy questions. UNDRIP was certainly one of those areas that we spent some time on.”

He noted that it was in late 2015 when CAPP began to focus on some of the questions initiated by UNDRIP. “In the spring of 2016,” he said, “we issued a discussion paper on the implementing of UNDRIP in Canada.”

That Discussion Paper, which is both reassuring and easy to read and understand is available here.

In the preamble to that discussion paper CAPP noted that in 2007 the “General Assembly of the United Nations adopted the United Nations Declaration on The Rights of Indigenous Peoples (UNDRIP),” and spoke briefly about the TRC’s 94 Calls to Action, including a “call to governments and the corporate sector” to adopt the document and apply its principles.

It also speaks about CAPP’s unwavering support for UNDRIP and the implementation of its principles in a manner consistent with the Canadian Constitution and law.

“CAPP endorses UNDRIP as a framework for reconciliation in Canada. CAPP member companies acknowledge the importance of reconciliation in Canada. We view natural resource development as linked to the broader Canadian reconciliation process. Within this process, we acknowledge our activities have impacted Indigenous communities. Our industry has a role in building respectful and mutually beneficial relationships with Indigenous Peoples. CAPP calls upon its member companies to ensure employees continue to receive appropriate education and awareness training regarding Indigenous Peoples in Canada.”

McGuigan said that during the conversation that took place after the release of the discussion paper on UNDRIP, it was a relatively simple process to get consensus because pretty much everyone was on the same page when it comes to supporting both Indigenous and human rights.

“We had a very good discussion about it,” assured McGuigan. “I imagine that everyone here today understands that UNDRIP is a human rights document, a document for the protection of Indigenous rights and human rights.

“It became very clear as we read through UNDRIP article by article is that for companies working in Canada, as a country that respects human rights and has protection for those rights, it’s a valuable thing for a business. That is something that all of the companies around the table value and it’s a piece that we tried to reflect in our discussion paper.

“When we went through the document clause by clause the vast majority of those clauses were sound; there was really no need for much discussion because everyone around the table was very supportive of it. We put the discussion paper out because we thought there was a need for dialogue about UNDRIP and dialogue about implementing UNDRIP in Canada: we wanted to provoke some conversation.”

The discussion paper, a must-read document for all Alberta Native News readers, is sectioned into six different topic areas including: Building Understanding, The Canadian Context, Preservation of Human Rights, Recognition of Culture and Education, Rights to Self-Determination, Free Prior and Informed Consent and Economic and Social Sustainability.

McGuigan went on to note that though the UNDRIP document is generally accepted there are some challenges when it comes to the wording in the document.

“There is some ambiguity to that language and it opens different interpretations,” he explained, noting because of some of the wording, “there are some conflicting opinions around that.”

During his conversation McGuigan delved into the different sections of UNDRIP and later spoke about the federal government’s implementation of the document without talking to or consulting with CAPP or the Indigenous community.

In closing he noted that the reason he brought the subject up was because though CAPP’s discussion paper and ongoing work has continually called for dialogue, “before the (federal government) announced the 10 Principles there was no consultation process and the announcement made this spring about the Framework for Recognition and Implementation there was no consultation in advance of that either.

“I think what you’re seeing is the federal government adopting understandings of UNDRIP without a consultation process and without dialogue. I think it’s important to note that there is a move and there is a significant shift happening (and it’s) coming from the federal government. I think it is important to pay attention to that and to make sure we are aware of where that’s going.”

“Indigenous consultation is a controversial topic that has a way of stirring peoples’ emotions,” noted conference producer Desiree Finhert. “It is always encouraging when people come together to talk about why consultation isn’t working, and how they want to change the system.”

Based in Toronto, The Canadian Institute is both a conduit and stimulus to cutting edge thinking and market trend development. The organization, which has forged close ties with industry specialists, lawyers and other professionals throughout Canada acts as a barometer for Canada’s ever-evolving industrial and professional landscape.