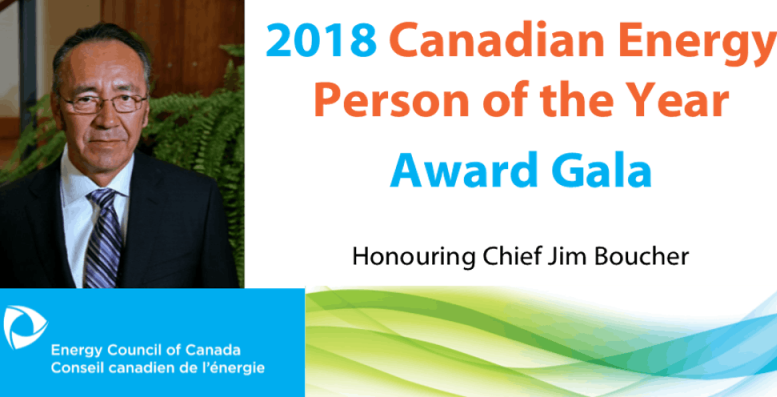 Ottawa – The Energy Council of Canada has chosen Chief Jim Boucher of Fort McKay, Alberta as Canadian Energy Person of the Year.

Chief Boucher, the Fort McKay First Nation Chief and Chairman of the Fort McKay Group of Companies, will be honoured by the Energy Council of Canada on Thursday, November 15th, 2018 at the Telus Convention Centre in Calgary, Alberta.

It is a well-deserved honour, said Energy Council of Canada President, Jacob Irving.

Chief Jim Boucher has been and continues to be, one of the most influential people in Canada, and one of its most successful Indigenous leaders.  The Energy Council of Canada is delighted to recognize him as the 2018 Canadian Energy Person of the Year.

When elected as Chief of the Fort McKay First Nation, Jim Boucher recognized that the community’s proximity to the oil sands not only presented problems, but also offered ample opportunities for his people. He immediately and effectively began to build a relationship with the oil industry and all levels of government to address the community’s social and economic conditions, facilitate proper consultation, and most importantly, advocate the rights of his people.

As a successful Board Chairman, Chief Boucher has developed and sustained successful First Nation-owned businesses that create economic wealth and opportunities by leading the Fort McKay First Nation majority-owned businesses and the 100 per cent band-owned and operated Fort McKay Group of Companies (FMGOC) to grow into one of the most successful First Nation-owned business ventures in Canada. Together, they earned an average gross annual revenue of $1.7 billion in the last 5 years. Chief Boucher believes the greatest accomplishment to date under his leadership, remains the signing of Fort McKay’s Treaty Land Entitlement Settlement Agreement in 2003.

Chief Boucher says the basis for much of his success comes from “the combination of perseverance and having the right attitude.” To many, he is a chief, a peer, a leader, a client or provider.  He is an “Elder” in the best and truest sense of the word. He is also the proud father of two children and has five grandchildren.

The Energy Council of Canada recognizes Chief Boucher as a true Canadian energy sector entrepreneur and leader.  Canada’s energy industry is both proud and excited to name Chief Jim Boucher as their 2018 Canadian Energy Person of the Year.

Fort McKay First Nation (FMFN) is composed of over 800 band members and located approximately 65 km north of Fort McMurray. As a First Nation, FMFN is a leader in working collaboratively with industry, and holds a successful and long-established record of strong relationship building with the various mining companies operating adjacent to its land. Fort McKay has aimed to maximize its participation in the economy to create sustainable, long-term growth and development.