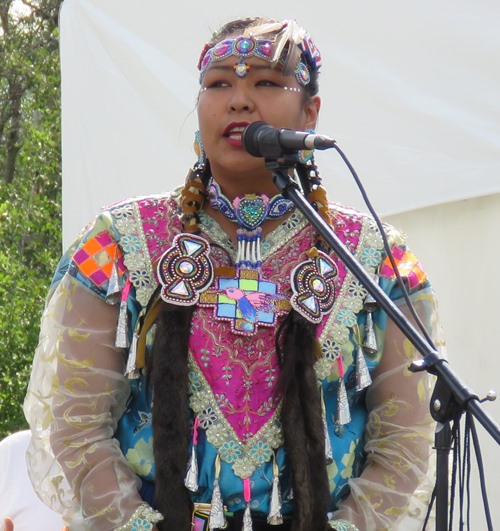 (ANNews) – The Edmonton Servus Heritage Festival is one of the most popular annual events that takes place in Alberta’s capital every year, a trend that was instigated in 1974, when the Government of Alberta declared the first Monday in August an annual holiday to recognize and celebrate the ethnic diversity of its citizens.

The event also brings much needed groceries and supplies to the Edmonton Food Bank. In fact, from 1984 through 2013 the Heritage Festival collected more than 1.4 million kilograms of food from generous Edmontonians and other Albertans who attended the annual three-day festival.

The Servus Heritage Festival, organized by the Edmonton Heritage Festival Association, is a very busy but delightful undertaking that gives visitors an opportunity to sample delicious ethnic food, see creative performances, shop for crafts and clothing, and learn more about the many countries that are represented.  Each year between 275,000 and 400,000 people visit Hawrelak Park to enjoy the event and visit over 90 groups who have presented cultural pavilions at the Heritage Festival. This year more than 66 pavilions representing over 85 unique cultures joined together to share their food, entertainment and crafts. 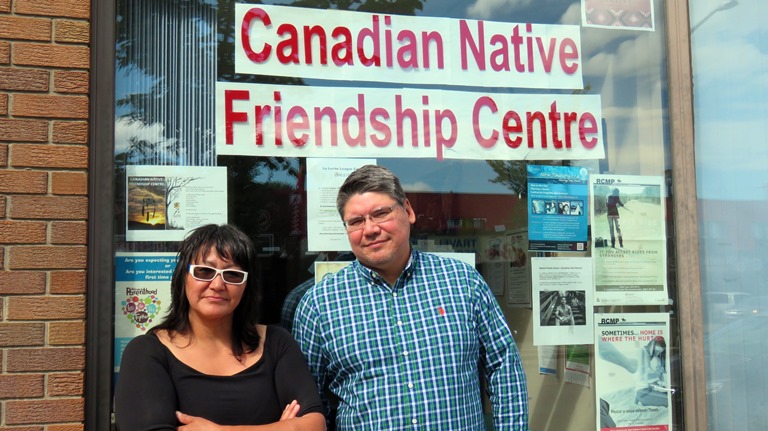 “It was once again a very outstanding event – and but for a little rain and a thunderstorm that had us all scrambling for a little while, it was as good as it gets – and maybe even a little better for us because this year we may be able to break even,” noted Ron (Moon) Walker, Executive Director of the Canadian Native Friendship Centre in Edmonton.

“We’ve been participating in the annual festival for the past 30 years – it’s an event the whole staff gets excited about,” added Walker, noting that most of the cost of this year’s event will be covered, “thanks to fewer entertainment costs and a record number of sales of our popular bannock, buffalo burgers, skewers and refreshing mint tea.”

“It’s a lot of hard work, but it’s all very worthwhile,” assured CNFC Finance/Administration Officer, Gloria Swan. “We’ve made a lot of friends there over the years – and this year our sales were great; in fact we sold more bannock than we ever have before.”

Swan has been involved with the Heritage Festival for the past three years; she organized and operated the kitchen for two of them but this year a new kitchen manager/cook, Tracy Courtorielle, came on board.

“He’s fantastic,” she beamed. “He just joined us this year and we are very happy that he did – his bannock was so good that we had many people coming back for more. His recipe is out of this world. He made everything up in advance and our volunteers cooked it. Tracy also made all of our buffalo burgers and buffalo skewers and left the place so clean after the show that we had very little to do.” 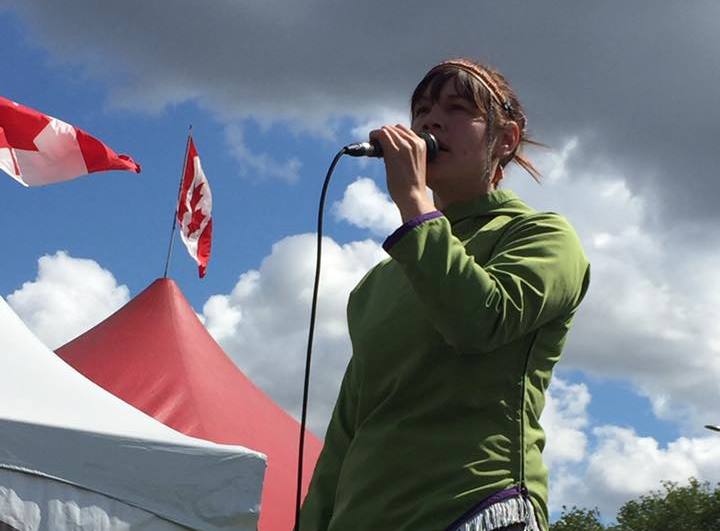 The sale of the food items is actually a fund raiser, but not necessarily a big moneymaker.

“This year, however, we may even break even,” noted Swan. “The cost for entertainers was less this year and we sold more bannock than ever before; we made about 5,000 pieces in total. This, combined with lower entertainment costs, might even see us in the black this year; we usually only recover about half our costs but if we do make any money it will go right back into the budget for next year’s Heritage Festival.”

The first day of the festival got underway when Inuit throat singer Malaya Bishop took to the podium.

“She is a wonderful performer with a beautiful voice and great stage presence and the crowd wasn’t afraid to show their appreciation; they clapped and cheered loud and hard,” said Walker. “We had some outstanding performances this year, including those from Metis fiddler, Danial Gervais and the ever-popular duo, Young Medicine. We also had a very talented group of young powwow dancers, many of whom joined us at our powwow sessions at the Friendship Centre this year. They gave demonstrations of the different dances and really wowed the crowds with their energy and expertise.” 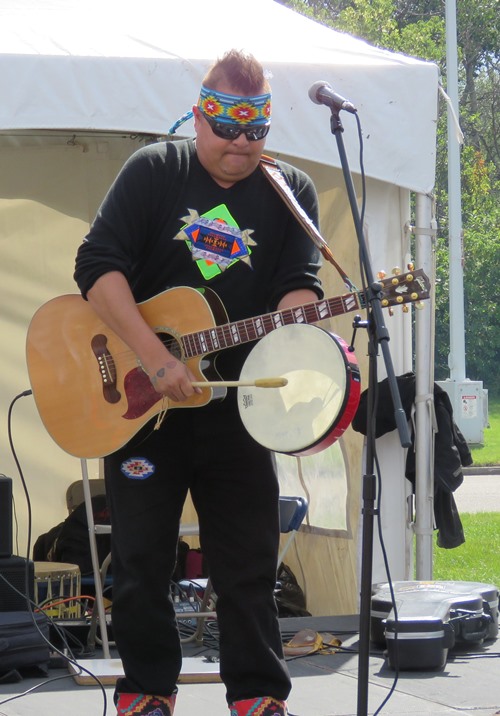 Curt Young, one half of the talented Young Medicine duo.

Walker lauded the work of Daniel Gervais, who he called “one of the up and coming musicians in the field of entertainment today. He is awesome and energetic and full of raw talent. After the festival here he went out to Saskatchewan where he participated in the John Arcand Fiddle Fest.”

“The artists sing, play guitar, cedar flute, harmonica, hand drum and rattle,” noted Walker. “They use contemporary and traditional styles of Native fancy dancing to share stories and inspirational messages throughout their performances.”

Curt hails from the Salteaux-Cree from Gordon’s and Cowessess First Nations in Saskatchewan while partner Jamie is Blackfoot from Kainai and Piikani Nations in Alberta; she is also an educator, dancer, model, fashion designer and musician.

Hoop dancer Lakota Tootoosis was another performer that wowed the crowds at this year’s event. 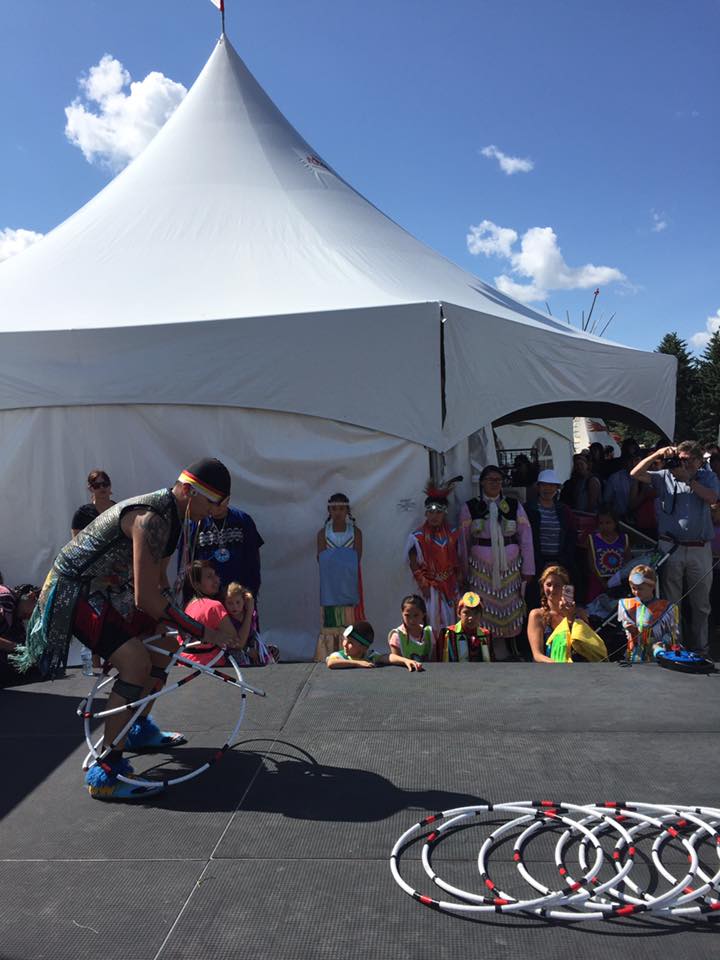 Hoop Dancer Lakota Tootoosis was one of the exciting and energetic performers at the Aboriginal Pavilion during the 2016 Heritage Festival in Edmonton. Photo supplied by Ron Walker

“Once again I have to use the word ‘awesome,’ because he is certainly nothing less than spectacular,” emphasized Walker. “We were very fortunate to be able to get him this year. We also hired a male Grass Dancer and a Traditional Dancer and they were also a sight to behold. The audience loved their performances.”

Walker is also dancer; he specializes in the Chicken Dance, something he’s been doing for nearly three decades. He remembers hoop dancer Tootoosis in his younger years.

“I remember when I was working as a liaison with the Edmonton Catholic schools and he was one of the up-and-coming kids who was learning the powwow and enjoying his culture. And now he is a major player on the powwow circuit and as skilled an entertainer as you will find anywhere; he is inspirational and he enjoys sharing our culture with the world.”

The CNFC, which came into being in 1962, was organized to help Aboriginal newcomers to the city with referral services and social and recreational programs. It was, and remains, a gathering place for meetings, social events, and community gatherings.  Today, the Centre continues to provide cultural, recreational and social programming. The organization serves more than 10,000 people annually through various programs, services and functions.

The vision of the Canadian Native Friendship Centre is toward an integrated, self-reliant Aboriginal community who participate as urban citizens taking responsibility for their shared condition in a spirit of health, cooperation and wellness within a strong cultural base.

For more information, see the website at: cnfc.ca.  Click here for more photos from the 2016 Aboriginal Pavilion.