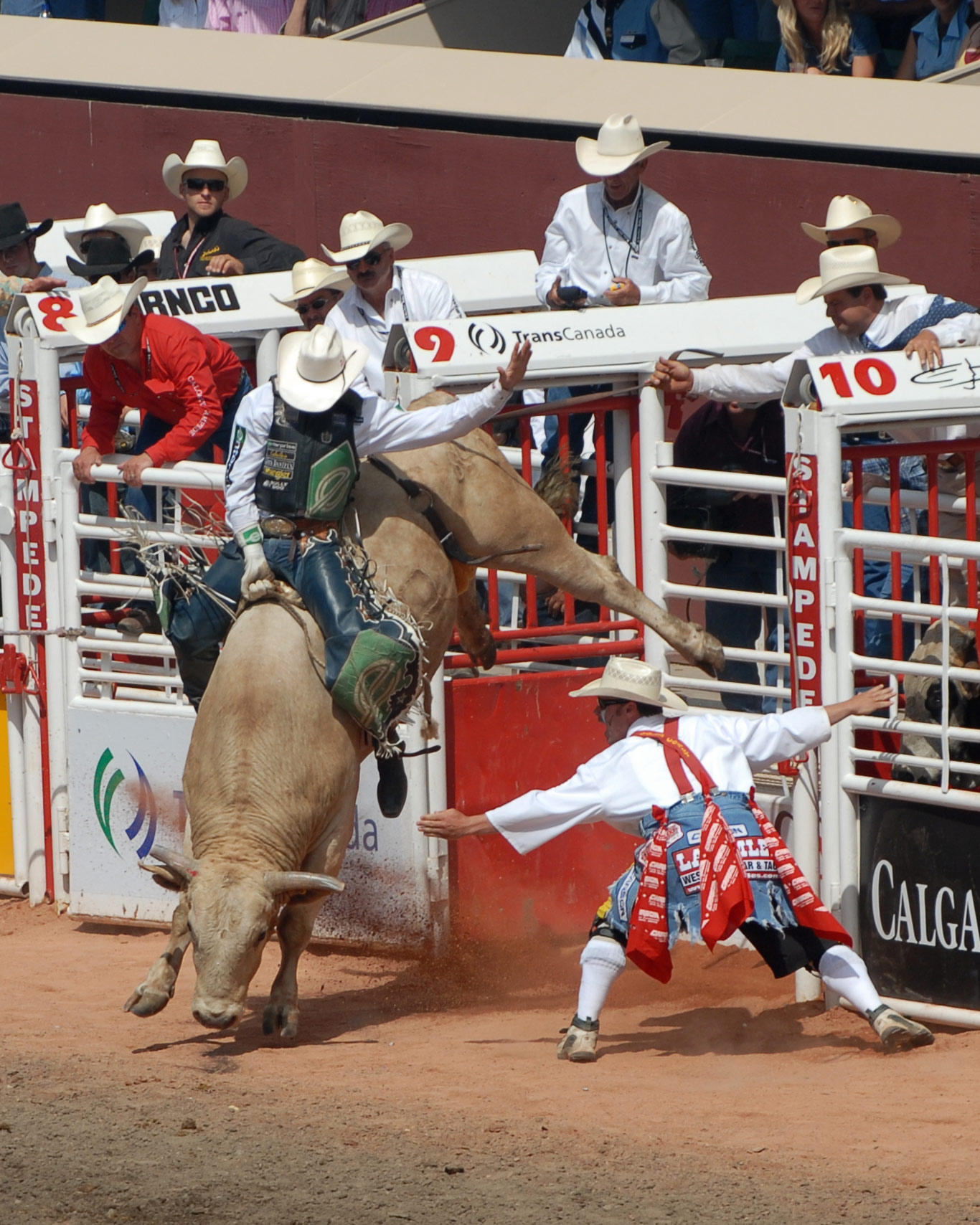 (ANNews) – The Calgary Stampede rodeo never fails to entice visitors by the thousands. Despite many days of rain and showers, the show proceeded, making it quite a challenge for everyone involved.

One hundred and twenty cowboys from five different countries – Australia, France, Brazil, the United States and Canada were represented this year. 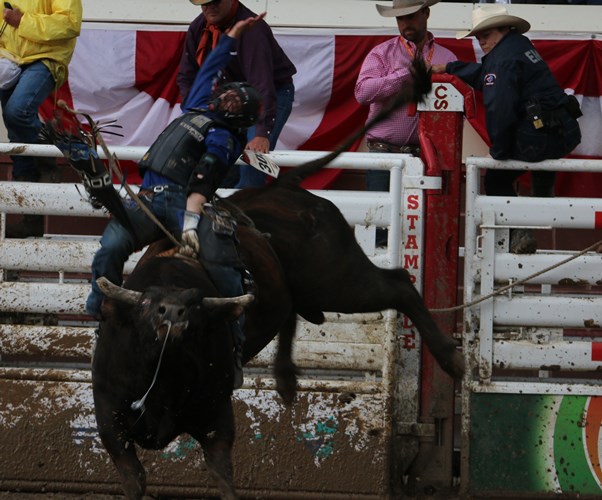 Bullrider Ryan Dirteater, from Oklahoma, made it into the Sunday showdown.  Photo by Terry Lusty

There were a few newcomers, three of them who are of Indigenous heritage from Brazil. The Brazilians – Fabiano Vieira, Robson Palermo, and Joao Ricardo Vieira – were all bull riders.  A new Aboriginal face from the United States was Ryan Dirteater from Oklahoma. Along with Fabiano Viera, Dirteater managed to make it through the week, right into the Sunday ‘showdown.’

In chuckwagon racing, the wagon from the Tsuut’ina First Nation, Grey Eagle Resort and Casino, driven by Kurt Bensmiller who won the Stampede’s Rangeland Chuckwagon Derby for the last two years, just missed qualifying for the top four wagons in Sunday’s final championship heat.  For many of the outfits it was a bitter pill to swallow due to the muddy track conditions which can make a difference in how horses run and how drivers handle their wagons. That is where the safety factor comes in for both horses and drivers as well as the outriders. And, of course, the drivers want to run ‘clean’ and not take any costly penalties. Still, all in all, Bensmiller, among others, did well in day money for the times they placed at the top of their daily heats. 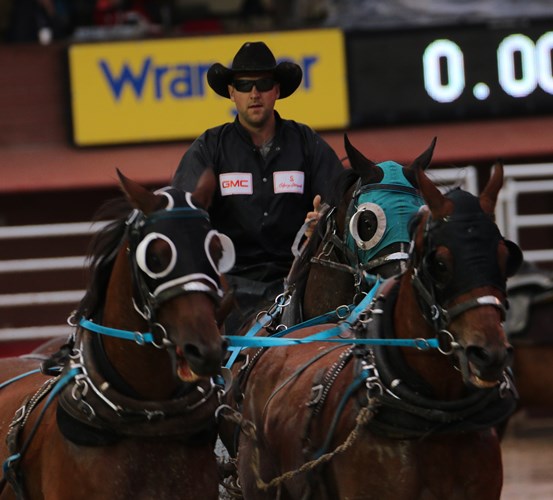 Two other veteran Aboriginal drivers, were Ray Mitsuing, former chief of Loon Lake First Nation in Saskatchewan, with over 30 years at the Rangeland Derby and Roger Moore, also from Loon Lake. Both managed to hold their own, making good day money through the week but not qualifying for the championship heat on the final Sunday.

In a brief interview with Mitsuing, he wholeheartedly agreed that the poor economy has played a definite role in the sport of chuckwagon racing. “Sponsorship is down and a lot of drivers are going to be struggling,” he stated. “For new drivers coming in, it’s going to be tough for them.”

As for the new barns at the grounds, most of the drivers are quite pleased. Mitsuing said, “They fixed up the barns here so nice now. No problems whatsoever.” His son, Dean is off for the year but sons Dale and Devin are very much involved. Devin, he explained, is doing really well, driving over in Saskatchewan where “he is sitting fourth” on the circuit. And Dale is outriding this year at the Stampede.

Mitsuing, who once won the Stampede’s aggregate title and a brand new truck that became his pride and joy, never fails to apply the importance of racing penalty-free. Both he says are critical to winning where 1/100th of a second can make the difference and, of course, the importance of safety – for both the animals and the drivers, not to mention the positive image that it gives the sport itself. 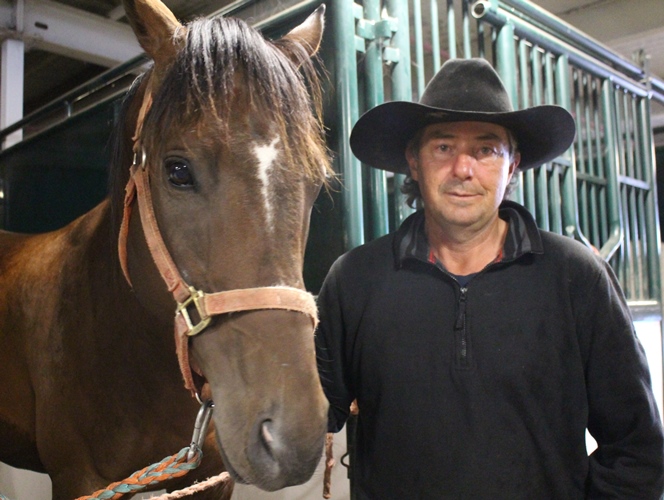 Chuckwagon driver Roger Moore with one of his horses, Blue.   Photo by Terry Lusty

Roger Moore has been a veteran driver of 25 years at Calgary and works in the oilpatch in the off-season.

When questioned about the impacts of the economy on wagon racing, he – like past champion Kurt Bensmiller – says the downward spiral has hurt “big time, it’s been huge.”

“It’s been a tough year for everyone, everybody is hurting,” he added.

The father of four says last year was one of his best. Overall he made a lot of day money and was close to the title had it not been for his knocking over one barrel. The costly five-second penalty is major in the business where mere fractions can mean a championship.

Moore has 16 horses in his barns but does not favor any particular one. “They’re all special to me,” he noted. “I could tell you a story about every one of these horses.” Two of them received special recognition in terms of the racing association’s horse awards where both Arizona Dream and West Jet were winners.

Most of Moore’s horses come from sales, either at Winnipeg or Saskatoon. He may pick up the odd one from Edmonton and nothing from Regina which doesn’t have any racing, he explained.

He has a wife and four children of whom, only one displays any true interest in the business. “It’s a different age for the young guys,” he stated. They are so caught up in modern technology, games and what-have-you. “When we were growing up, all we had was horses,” he concluded.

Be the first to comment on "Rain or shine, the Calgary Stampede Rodeo is always a thrill"