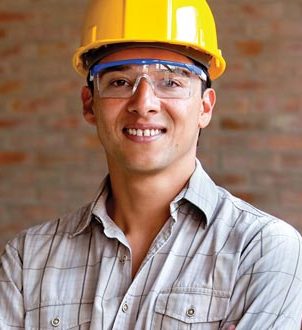 (ANNews) – A NorQuest College Indigenous training, mentoring and employment initiative is proving to be even more successful than expected when the pilot project first launched in April of 2015.

“It’s been very busy around here this past year and we are both pleased and excited to note that we are passing our initial expectations,” smiled Ruby Littlechild, the Manager of the NorQuest-based Alberta Aboriginal Construction Career Centre (AACCC), which is funded by the Alberta government and is aimed at increasing opportunities for Indigenous and other workers seeking employment and /or wishing to pursue construction-related careers.

The initiative, which has partnered with various companies and corporations on board since its inception, is proving to be a valuable tool that is enhancing skills, creating employment opportunities and setting a precedent that Littlechild hopes will secure sustainable government funding well into the future. The program has already received its second-year funding of about $500,000 from the province and a number of smaller private industry donations. 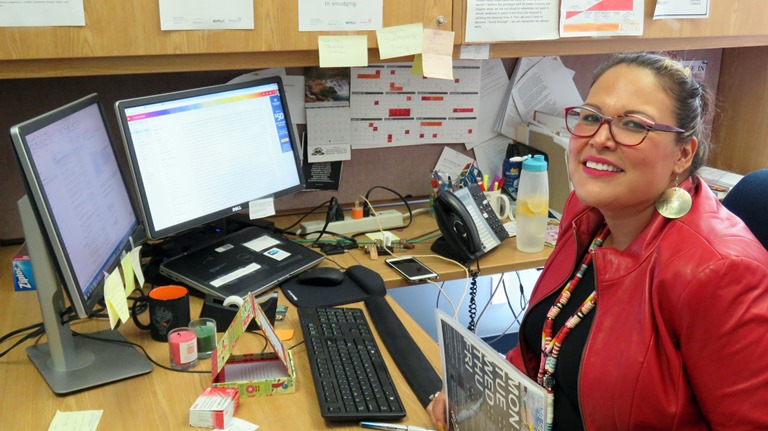 “When we first launched the program.” noted Littlechild, “our projected one-year outcomes included adding 15 registrants each month, placing 150 workers in jobs, training another 150 workers in safety and other construction protocol and seeing 300 individuals receiving career coaching.”

Those figures have been surpassed, some have doubled while others have tripled expectations.

“As of August 2, 2016,” beamed Littlechild, “we have completed 1137 client intakes, placed approximately 900 workers in jobs and have watched as 2051 applicants completed their training courses.”

Female intakes to the program make up 24 percent (270) of the total; 74 percent or 536 of the intakes (men and women) are First Nation, Metis and Inuit workers.

“NorQuest College’s Alberta Aboriginal Construction Career Centre,” noted Littlechild, “is a unique, client focused employment service designed to connect prospective Aboriginal workers with employers recruiting for construction related careers. Space is provided at NorQuest’s Downtown Edmonton campus. We offer a safe, modern, comfortable and professionally equipped facility with a holistic, comprehensive career development resource centre for our clients. We also have a workshop room for cultural reclamation and career coaching stations with a complement of three full-time staff and one shared administrative support staff, all of which are located within NorQuest College’s career and employment services.” 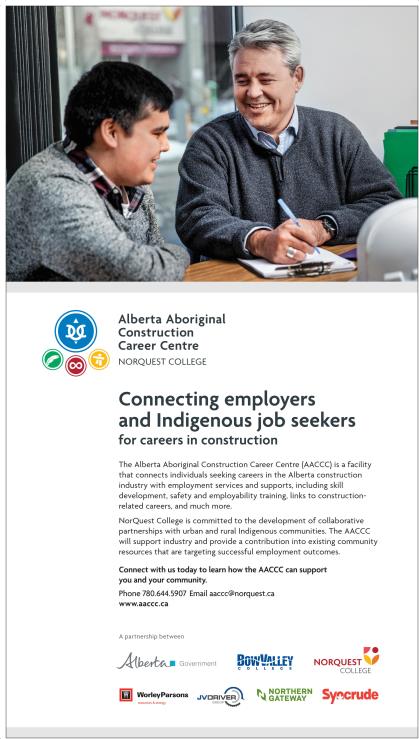 Littlechild, who referred to the centre as “a hub of community economic development,” said she can’t take credit for the numbers of people who have found employment during the past year.

“We are working together with some outstanding employment counsellors from organizations that include Oteenow, Bent Arrow, Stan Daniels Centre, Corrections Services, and Alberta’s ASET Holders, who all come here to help with resume building, job searches, job placements and more.”

“Our numbers of qualified workers have gone through the roof, and in the end everyone benefits,” noted Littlechild. “Working people are contributors; they pay taxes, they buy goods, they pay for services, they generate hundreds of millions of dollars and it all goes back into the economy. This initiative is also playing a role in establishing and maintaining Indigenous inclusion in the labour market, and that is very important today.

“Barriers are being broken down and this program is definitely playing a role in ensuring that Aboriginal people are not only accepted, but sought after as quality employees with knowledge, experience and a great deal to offer. We are involved in and encourage Indigenous awareness training to industry.

“We’re making a positive difference and we want that to continue well into the future. To ensure that that is the case, we are going to need sustainable funding and we believe our successful track record will help ensure that this goal will be achieved.

“This is a win-win situation for everyone because working together we have the government, industry and an educational institution all collaborating, all coming together to empower Indigenous people. We are not alone; we have strong partners and together we are making significant progress and setting precedents that will carry us all into a better future.”

Littlechild, who joined NorQuest in February 2015, is a former Association of Professional Engineers and Geoscientists of Alberta (APEGA) employee who has a great deal of experience creating and operating mentoring and outreach programs. She is also committed to the encouragement of higher education, and has played an ongoing role as a mentor for First Nations people. She earned her Bachelor of Arts Degree from the University of Alberta and completed her Masters in Education degree from Gonzaga University in 2012. She is currently working on her Masters in Business Administration.

There are many reasons why the program attracts so many would-be construction-related workers and Littlechild said that one of the main reasons is because of the quick response the AACCC gives to those who come in looking for a career opportunity.

“Men and women who come here want to work and they want to work as soon as possible. We don’t keep people who want to work waiting; we don’t have a six-week waiting period like many others do.

“For example, we have a lot of people coming in who have expired tickets and they want to have them renewed. No one wants to wait six weeks to have a ticket renewed; they want to work tomorrow so when they come here with a letter from an employer telling them to renew their tickets and then they can be put to work, we get on it right away. Within a few days, if they pass their tests, the tickets are renewed.

“There is no waiting period, no delay – that’s been one of the key factors of our continued success. We’ve had a lot of positive feedback from workers who came here on a Monday or Tuesday and found themselves in training the next day.”

One of the numerous testimonials offered by Littlechild came from Ariel Garley, who wrote: “I was recommended to the AACCC by a staff member at the Stan Daniels Healing Centre. I was seeking advice and assistance because I wanted to acquire safety tickets for some short term employment. When I walked into the centre I was greeted with a positive atmosphere full of energy and opportunity. I was able to speak with a great career consultant who not only assisted me in attaining the tickets I came for, but also helped me think about my long-term goals and what I would need to achieve them. Once my short term employment ended I returned to the centre. The consultant saw potential in me and set up an interview with the management at Park Derochie. They also saw my potential and not only offered me full-time employment, but an opportunity for a career as a fire proofer. My life has been turned around and thanks to the staff at the AACCC I now see a very bright future ahead.”

“At NorQuest College,” noted Littlechild, “our aim is to contribute to the increasing demands of the economy and to maximize opportunities that others may not see.

The Alberta Aboriginal Construction Career Centre is meeting and in most cases exceeding its initial goals. For more information about the AACCC or to learn how you can prepare for a construction-related career, contact Ruby Littlechild at 780-644-5907 or send an email to: [email protected]