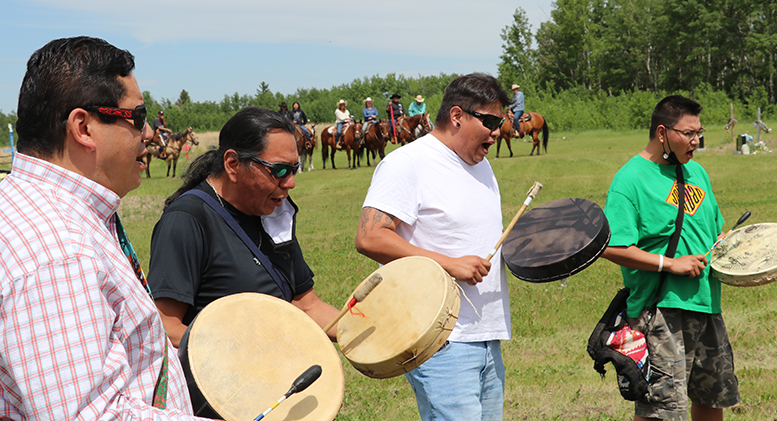 The Tsuut'ina Singers / Drummers and over a dozen horseback riders accompanied Gloria Littlelight on her spirit journey last month. 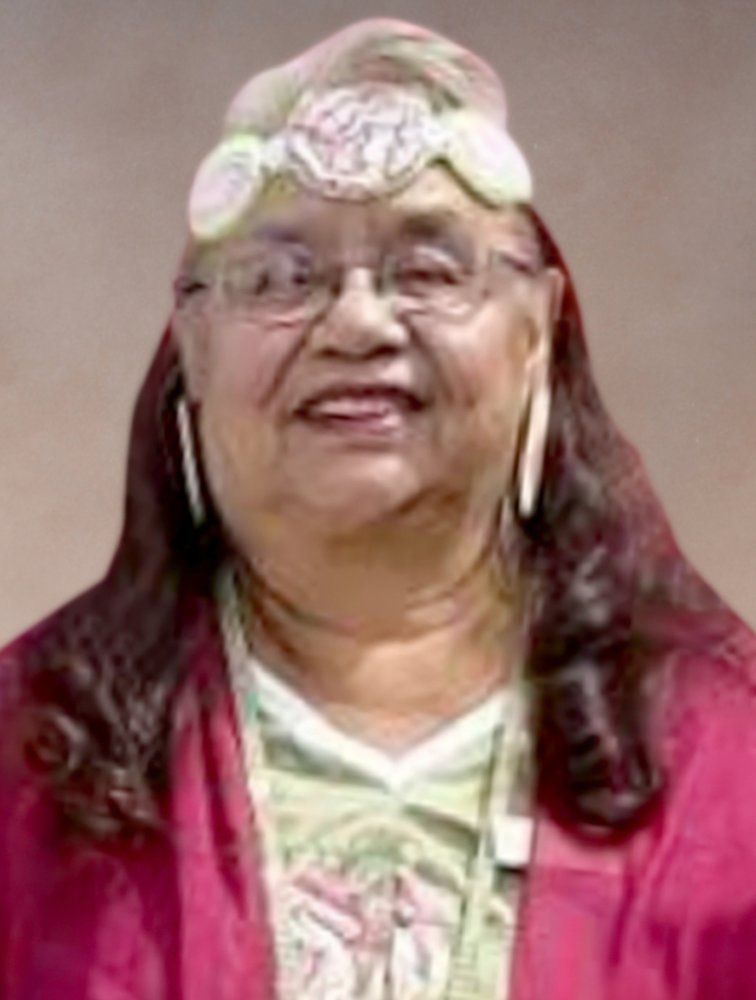 (ANNews) – Gloria Jean Littlelight, 73, has moved on to Big Sky Country. On June 14, 2021, the Creator came for her. A member of the Tsuut’ina First Nation on the southwest edge of Calgary, Alberta, the former Indigenous barrel racing champion took her final trip.

Littlelight made history in 1965 when she became the very first Indian Village Princess of the world-famous Calgary Stampede. She was 18 years young at the time and fresh out of high school, having graduated from Henry Wise Wood High in Calgary.

For this avid and gifted horsewoman, 1965 truly was a banner year, filled with successes. In that year she captured the Sarcee (now known as Tsuut’ina First Nation) Rodeo Barrel Racing title, the Sarcee Rodeo Princess crown, as well as the Calgary Stampede’s Indian Village Princess title. All at the tender age of 18. In addition, she captured the provincial IRCA (Indian Rodeo Cowboys Association) barrel racing crown.

This champion always credited her late grandfather, Alex Bull, for pushing her to complete her Grade 12. In doing so, she was one of a very few in her generation to accomplish this feat.

She often visited Mr. Bull when he was a tuberculosis patient at the sanitarium in Bowness, on the western edge of Calgary. Another individual who helped with her horsemanship was Arthur One Spot as well as encouragement from fellow rodeo people such as: Lawrence Jacobs, Sidney Starlight, Rupert Crowchild, and her brother Bedford – all from her home reserve.

During her reign as the Stampede’s Indian Princess, she would man the Indian crafts display, answer questions from tourists and visitors, make special guest appearances and deliver speeches, and participate in parades and Stampede rodeo grand entries on horseback before tens of thousands of people in the grandstands. She was also sought out by visitors, especially those from other countries, to have their photos taken with her.

One of her favourite memories was sitting with one of country music’s legends, Ian Tyson. Still another precious memory was sharing the dancing platform that circled the Stampede’s original Sun Tree with the late legendary Elder, Ben Calf Robe.

The young lady, however, soon shifted from horses to typewriters. She had lightning fingers and was quickly snapped up for her excellent secretarial skills. Just a few of her employers included the Canadian Armed Forces, Petro Canada and Sarcee Chief Clifford Big Plume.

When she reached mid-life, Littlelight fell victim to a very serious accident that nearly claimed her life. She and her daughter were in an extremely bad highway collision in southern Alberta and she spent about three months in ICU. While the average person would not have survived it, Creator somehow gifted her with another 33 years of life.

She brought four children into the world – Sonny, Kim, Clayton and Carrie. She is survived by her brother Frank and sisters Josephine (Bunny), Betty and Bev as well as numerous grandchildren and friends. She was predeceased by her parents Joe and Dora Big Plume and Francis Littlelight in addition to siblings Bedford, Fred, Lena, Judi, Ross and nephew, Jordie.

Funeral services were conducted at Bullhead Hall with burial at Tsuut’ina Cemetery on June 17. Her spirit journey was accompanied by over a dozen horseback riders and the Tsuut’ina Singers/drummers.