(ANNews) – The annual spring feast organized and hosted by the Elders, staff, students and volunteers at Amiskwaciy Academy was another successful venture this year. The Academy welcomed students and staff from area schools, community partners, volunteers, media and others to join in as the school celebrated the coming of spring and the renewal of life with another outstanding meal from the kitchen staff and many words of wisdom and thanks from the podium.

In his opening address, Principal Fred Hines acknowledged “the many supporters, donors, mentors, Aboriginal relations workers, teachers, support workers, staff members, healthy lunch program workers” and others who “play an integral role” in the development and education of the Amiskwaciy student body. 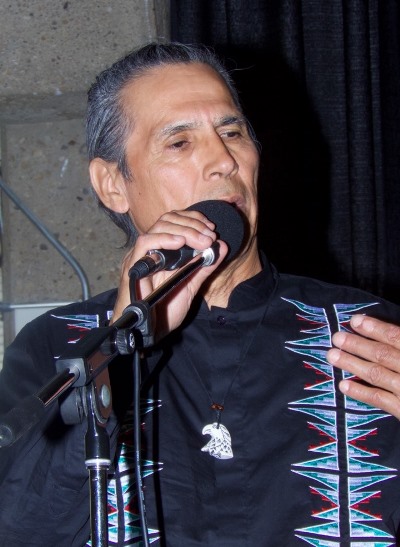 Elder Francis Whiskyjack talked about spring as “a season of renewal, a season of hope, a time when new life from the planet and animal world begins anew.” He thanked the room full of special guests, students and teachers and talked about another successful year in the making, reminding students that perseverance and hard work would help them achieve their academic goals.

The 2016 Spring Feast, as in the years past, honoured partners and community members for their extraordinary work and dedication to learning.

Trustees Ray Martin, Cheryl Joiner, Nathan Ip and Sherry Adams, along with Assistant Superintendent Kent Pharis offered words of support to the students. The importance of education and high school completion were among the topics covered by speakers.

Noting that he was pleased to both represent the EPSB and “to celebrate the birth of a new season and new life,” Martin said it was especially nice to see so many community partners and so many other schools attending. 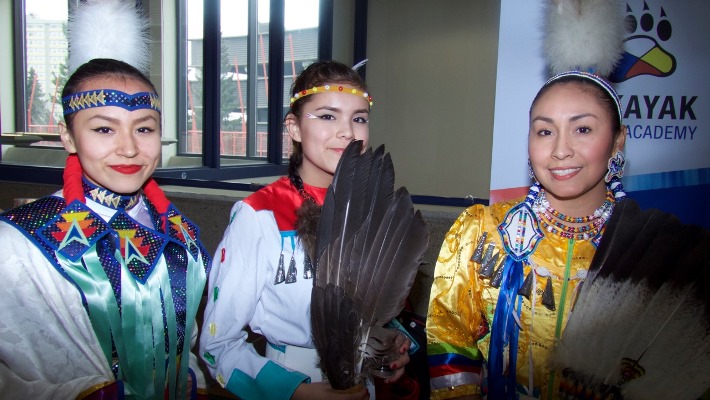 “This is a wonderful opportunity to meet and greet one another and to honour First Nation, Métis and Inuit cultures in a positive and quality educational setting as we celebrate and recognize how we are all connected,” he said.

“Amiskwaciy’s teaching styles reflect that belief through the involvement of Elders, community partners, family and teaching staff that help to create a holistic learning environment. These values reflect and support those of the EPSB as we work together to turn the learners of today into the leaders of tomorrow. Spring is truly a time of renewal and growth – like today’s ceremony, built on the strong, rich traditions of the past, but that also celebrate the future, the potential of new life and the opportunities to come.”

The Spring Feast is one of several gatherings that the academy, a former airport terminal building, renovated to create a unique learning environment, hosts each year to thank the many sponsors, helpers, students, families, volunteers, Elders, organization’s and others who support the school in so many different ways. 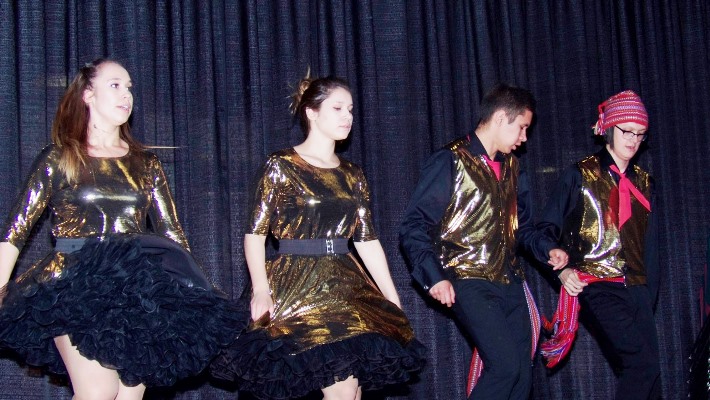 “We are very appreciative of the volunteer support we receive each year to help with our events,” assured Principal Hines. “We are always in need of volunteers and individuals with coaching or other special skills and we welcome inquiries throughout the school year.”

Dr. Annette Trimbee took to the podium to talk to the students about setting goals and completing school. The seventh president and vice-chancellor of the University of Winnipeg, Trimbee also spent several years as a deputy minister in the Government of Alberta. In May 2016, Trimbee was appointed to the board of Manitoba Hydro where she will share her knowledge and expertise in water management and energy policy. In 2015, she served on a four-person panel, whose task was to review and make recommendations related to Alberta’s oil and gas royalty regime. In 2015, she was also named co-Chair of the Lake Friendly Stewards Alliance by the Manitoba government. The goal of the Alliance is to create a broad base of support for and awareness of the challenges facing Manitoba’s lakes, especially Lake Winnipeg. 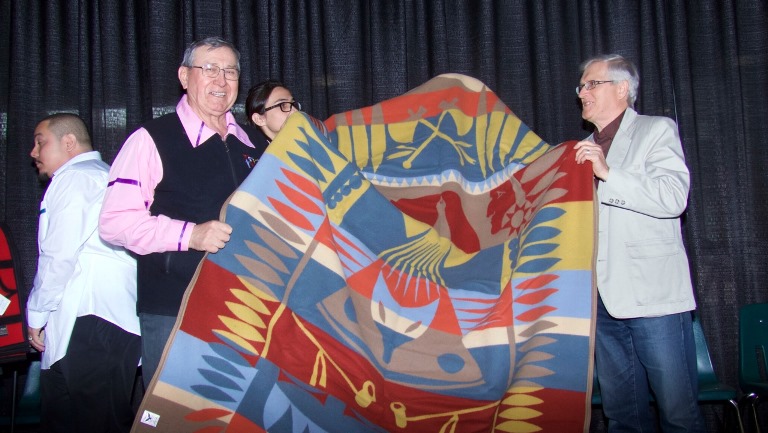 She told the gathering at Amiskwaciy Academy that the main reason she works at the University of Winnipeg is because of the support the school gives to Aboriginal students.

The University of Winnipeg’s commitment to serving Aboriginal students “really appeals to me,” she noted. “Like many kids growing up in the 1960s in Winnipeg I was confused about my heritage. My parents both spoke French as their mother tongue but all of their siblings married partners who did not. They stopped speaking French at home before I was born. My grandmother on my dad’s side was pretty clear that she was Metis and yet my dad said we were not. I understand my parents’ choices but at the same time I do wish times were different and my parents had continued to speak French at home and celebrated our Metis heritage. My Metis grandmother had a huge influence on me.”

During the course of the feast Principal Hines and several others invited to the podium recognized the Freidel family. Marge Freidel, a former Elder with Amiskwaciy would have celebrated her 59th wedding anniversary, a highlight that saw a gift basket presented to her husband, Cliff and other family members. Marge passed away on Tuesday, September 6, 2011 at the age of 75 years. 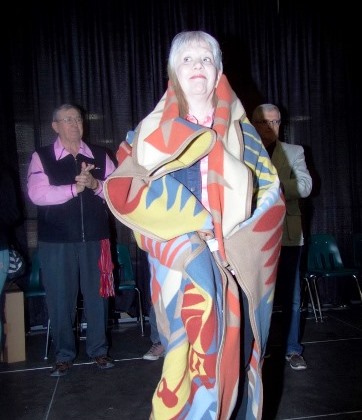 Dr. Lois Edge, MacEwan University (Indigenous Studies was one of the recipients of an honour blanket.

Entertainment included the Prince Charles Fiddlers, the Metis Child and Family Jiggers and the Eastglen Dancers.

Amiskwaciy Academy is an Edmonton Public School program of choice that provides solid academic programming within an Aboriginal context. The school, which is open to students of all backgrounds and cultures, honours the Aboriginal community and reflect its cultures, values, ancestral knowledge and traditions in achieving excellence in education. In doing so it provides, with the help of school and community Elders, a meaningful and balanced curriculum, bringing together the uniqueness of Aboriginal cultures, knowledge and languages in a positive and quality educational setting.

Culture is the core of everything that takes place at Amiskwaciy Academy. Working extensively and in close contact with on-site Elders, the school’s administration maintains close partnerships with the Cree, Stoney and Metis communities in and around the Capital Region. The Academy maintains an on-going cultural exchange program with a number of Edmonton-area Elementary Schools.