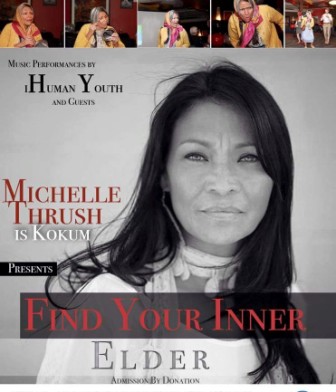 An iHuman fundraiser that took place last month at Amiskwaciy Academy included an upbeat, and very enjoyable performance by well-known actor Michelle Thrush. Her TV character, Gail Stoney, has played in all 32 episodes on the APTN television series, Blackstone, a unique and life-like award-winning drama created and directed by Ron E. Scott.

On May 24, she was joined by a host of equally upbeat and talented musicians who strutted their stuff on the Academy’s main stage. Thrush delivered a magnificent portrayal as Kokum in her one-woman show, Find Your Inner Elder. 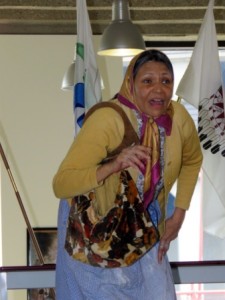 Actor Michelle Thrush moves through the ages in her performance of Find Your Inner Elder.                      Article and photos by John Copley

Delivering an outstanding performance, she moved through her story with her characters changing in mood and dialogue from that of a young child, to a youth and then a young woman and finally, a grandmother. She included the audience throughout the 75-minute dramatization; she often had them laughing out loud, and sometimes near tears. Near the finale she even had this reporter up on stage swinging the hips to the motion of the music.

Numerous singers and musicians took to the stage during the Sunday afternoon fundraiser, many of them youth who utilize the services of the iHuman office in downtown Edmonton.

The iHuman fundraiser was organized by the program’s emcee, Mike Gladue, one of several program coordinators on iHuman’s payroll. Unfortunately and without any warning, just two weeks after announcing the next acts to take the stage, Mike passed away suddenly from a probable brain aneurysm. He was an instrumental role model and program developer whose special knack for working with troubled youth impressed everyone who met him. He will be missed deeply by everyone whose lives he touched. 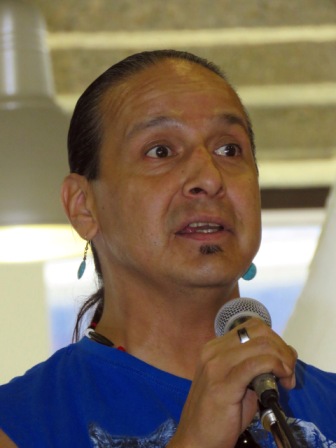 “Mike, a member of the Enoch First Nation, was hired in March this year to head-up iHuman’s newest program, iSucceed, a program designed to assist young Aboriginal youth to gain pre-employment and employment skills,” noted iHuman Executive Director Catherine Broomfield PHEc. “He was an amazing individual and he will certainly be missed both here and throughout the Aboriginal community. For the young men and women of iHuman, Mike represented a father figure – a First Nations man who could role model unconditional love. He recognized the healing that Aboriginal young people in this territory needed and he was enthusiastic in his championship of getting each youth whatever they needed to ensure their success. Mike saw the humanity in each of us and the impact of his loss is going to be profound.”

iSucceed is supported by the Urban Partnerships funding through the Alberta Native Friendship Centres Association. The goal of the program is to assist Aboriginal youth (up to age 25) in finding training, volunteerism or work experience in their chosen interest area.

“Participants in the program identify personal goals related to employment or training and are encircled by community members as additional supports and mentors,” explained Broomfield.

The program, which significantly features traditional culture and teachings, is a pilot project that has secured funding until December 31, 2015.

“Mike started at iHuman just three months ago and in the short time he was with us he enrolled 60 youth into the program; the initial goal was 20,” Broomfield added. “He used his network of friends and relations to start to help iHuman establish cultural practices throughout our agency. Lands had been gifted on Lac Ste. Anne and a sweat lodge has been constructed. Mike’s hope was to deliver a cultural summer camp there this July; the goal was to reintroduce youth to their traditional culture.  The fundraiser at Amiskwaciy was to raise money to hold the camp.” 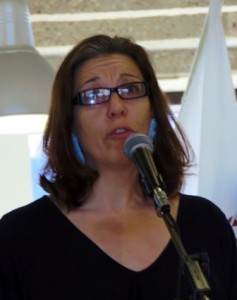 “Our mission,” explained iHuman Executive Director Catherine Broomfield PHEc, “is to reconnect youth into the community by developing skills, self-esteem and a sense of worth and ability through caring, creative and authentic programming.”

iHuman is currently engaging with and serving more than 500 youth in the capital region of Alberta. The organization works with youth (aged 12-24) from every demographic and socio-economic group, but Broomfield notes that “the majority of youth we work with are Aboriginal, many of whom are facing issues such as poverty, homelessness, addictions, mental health issues and gang affiliation.”

Broomfield said that too often the young people who make their way to iHuman feel no sense of self-worth; they often think they have nothing to hope for, but that’s not the case, she emphasized.

At iHuman,” she explained, “we discover that this is simply not true. We have discovered many highly talented individuals demonstrating amazing characteristics like creativity, loyalty, ingenuity, perseverance, leadership, ambition and above all else, resilience. Our mandate is to help these youth overcome disparity; we encourage them and support them to develop their talents, confidence, self-worth and ultimately their capacity to heal from trauma.  Then, they can realize their own potential to contribute to the community.” 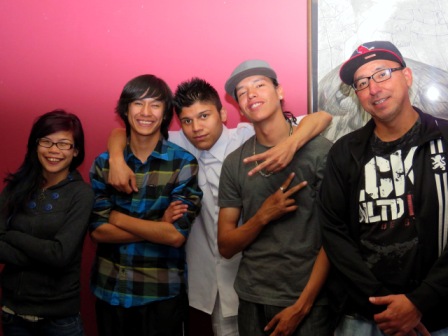 The program works; most youth remain active in iHuman for about three years and in that time are introduced to arts-based activities that help them heal and discover their own identity. They are also provided with constant support and guidance as they transition into healthier lifestyle choices and independent living.

While attending the iHuman fundraiser I met several musicians that had come together as a group with the help and support of Curtis Cardinal, a 40 year old entrepreneur and owner/operator of Edmonton-based, Eagle Vision Music and Design Studio. The company and the young and diverse group of talented songwriters, performers, hip hop recording artists, and beat makers that it represents, have been together for three years and are currently working on their debut album as they plan a cross-Canada tour.

Curtis Cardinal’s association with many of the musically-minded youth involved in iHuman’s unique programs has allowed the members to learn and grow as they collectively promote message-driven music in a “conscious hip-hop” format that encourages healing and growth and finding a path to a better way of life. The name of the group, which comprises more than a dozen members, is ColiCon or in its long-form, Collective Conscience. 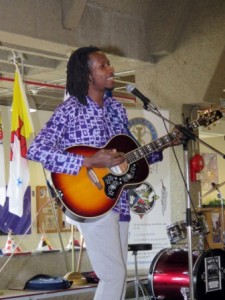 Guitarist / Singer Enoch Attey is the Music Director at iHuman.

“We are a group of young Aboriginal musicians from 16 through 25 years of age,” explained Cardinal, who manages the group. “During the past two years we have been actively involved in the Edmonton community and have played at numerous venues, including CKUA’s Party in the Park, the Heart of the City Music Festival, NextFest and the Works Festival that takes place in Churchill Square near the end of June.”

Invited by Curtis to the iHuman studio to meet the youth involved in the Collective Conscience, I arrived and sat across the table from 22 year old Aimee “Persuasion” Bellerose, 16 year old Andrew “Amplify” Cardinal, 22 year old William “Harsh Weather” Gladue, and 24 year old Deejay “Dyliverance” Cardinal, whose given name is actually Dylan.

Aimee was born in Kamloops and raised in Alberta; Andrew Cardinal comes from John D’or Prairie and William Gladue from High Prairie. DeeJay is a member of the Bigstone Cree Nation at Calling Lake.

DeeJay took the lead and talked briefly about how the group came together and how for the past three years they’ve been working toward a common goal, recognition and decent paying jobs.

“We began initially as Collective Conscience,” he explained, “but the numbers grew and we decided that because we want to encourage everyone interested in playing and creating music, we needed to split it up a bit. That’s when Raw Nation was created. Most of the people in our group are solo artists who come together to practice, make music, write songs, create beats and participate in community events. Raw Nation is the movement; Collective Conscience is our group.” 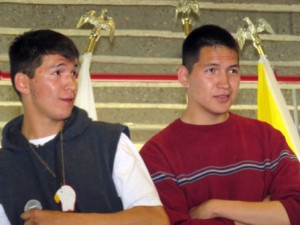 Aimee Bellerose’s ancestry is Métis and Vietnamese; she’s planning a trip to the Far East sometime soon and has two goals in mind.

“I want to study my ancestry and get to know about the other side of my family. I need to do that so I can finish a book I’ve been working on for the past few years. I also plan to create a photo documentary of my trip. ”

She also want to help underprivileged children in other parts of the world.

“I’d like to help in the movement to rescue children from human traffickers in the third world,” she confided.

Andrew Cardinal is the youngest member of group; he plans to return to school this fall to complete his Grade 12.

“I plan to enrol at Inner City High School this September,” he said, “I know there are some good teachers there, including one that I know so that might make the transition back to school easier.”

Collective Conscience, like the rest of Raw Nation, is building its repertoire and learning more and more about the music industry and how to capitalize on the opportunities that arise. The group plays up to a half dozen gigs every month, some for pay, some for free. 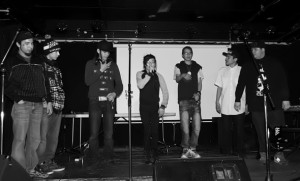 “Of course, we all like to get paid whenever possible,” smiled DeeJay Cardinal, “but we don’t let money stand in the way of progress. We often perform at local and other events just so we can get our name out there and so far the feedback has been very good. Thanks to the help we are receiving from MacEwan University professor Michael McDonald, we will be developing a documentary about what we’ve done and what we’re doing later this summer, hopefully in August. I think there’s also been talk about a 15-track album.”

“We are currently looking for some gigs that pay and we are also seeking a merchandising sponsorship so we can create some hats and shorts and perhaps jackets for the group,” added Curtis. “This will help to identify us and give us the type of branding that one needs to move forward, to be recognized as the group that you want performing at your next venue.”

On April 5th, Collective Conscience reached a milestone in their young careers when they became finalists in the popular and prestigious Landmark Showcase Final. Though they didn’t make it into the final five, Curtis says the experience was worth every moment.

“It’s a good show,” he added of the Landmark Showcase event, which took place in Edmonton’s Starlight Room. “Executives, publicists, radio programmers and others come out to watch the performances and they can see what you’ve got. Some of the bigger festivals and showcases in places like Montreal and Toronto draw large crowds.’

In the meantime, ColiCon continues to meet and practice and get ready for their next opportunity. This won’t be the last time you’re reading good things about this group of talented and intelligent young achievers. Their connection to iHuman, together with the experiences they’ve shared and the knowledge they’ve gained via their involvement. has made a big difference in the lives of these young men and women. They are quickly becoming the leaders, mentors, teachers and communicators of tomorrow.

For more information about iHuman see ihumanyouthsociety.org or call 780-421-8811.

To learn more about Collective Conscience see reverbnation.com/colicon  or artistecard.com/CollectiveConscience.

Article and photos by John Copley

Be the first to comment on "iHuman event includes drama, music and a room full of talent"