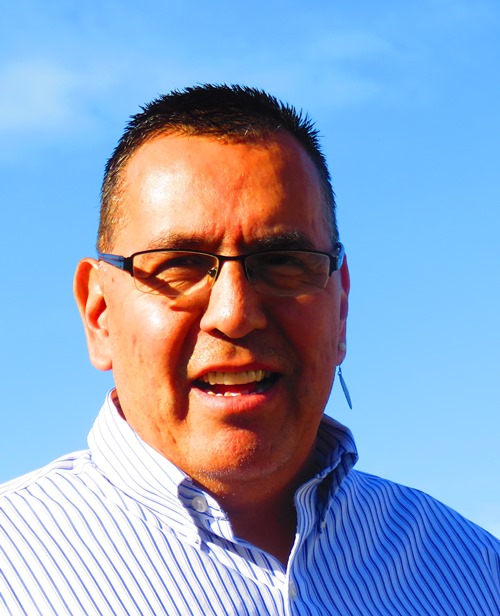 (ANNews) – Adam North Peigan is president of the 60s Scoop Indigenous Society of Alberta. Born in 1964, he was just an infant when he was removed from his ancestral home on southern Alberta’s Piikani First Nation. As president of this quickly growing society he’s been working with the Alberta government and is hopeful that positive news is just a few months away. The organization is seeking an apology and a path toward reconciliation.

The Society is currently meeting with and talking to survivors of the 60s Scoop era and getting their stories and input, to ensure that progress can be made as quickly as possible.

North Peigan has made a great deal of progress in the last two years, working in earnest to ensure that Alberta’s 60s Scoop survivors are able to heal and move forward. It’s in part a personal journey for him because he was also one of many who were victimized as a result of the 60s Scoop travesty.

“I was just an infant when I was taken,” he said, “and over the years I was placed in numerous non-Indigenous foster homes and children’s shelters and remained in them until I was 17 years old.

“The experiences I had caused a lot of suffering. I lost everything – my family, my language, my culture, my traditions and my community, but I think the thing that affected me most was the abandonment.

“When I did go home for the first time I was 17 years old. I’d already met my mother and an aunt and uncle so I stayed.”

What happened next, he explained, was unexpected but as he got older and looked back he came to understand the harsh realities of what happens when you remove children from their homes.

“I suffered a severe case of culture shock,” he said.

“It was like I was parachuted into a war zone. I was brought up in a totally different culture and wasn’t expecting what I found when I finally was able to go home. I saw poverty, unemployment, family violence, alcoholism and drug abuse and homelessness. I had a difficult time and a serious case of feeling that I didn’t belong. I started drinking and quickly became very attached to alcohol; it consumed my life for the next 15 years.”

His alcohol abuse led him to the streets of Vancouver where he wound up on East Hastings, the poorest and roughest community in British Columbia’s largest city.

“In my early 30’s I also became a father and because of my heavy drinking, child welfare came along and took my two daughters away and they both ended up in non-Aboriginal foster homes.”

It was the vicious cycle happening all over again.

“I think that’s when I hit rock bottom,” he continued. “

“I knew that I did not want to subject my kids to the life I’d been thrust into. I was a victim of the 60s Scoop and here it was nearly 20 years later and my kids were suffering the same fate as I had. I made a decision that I was going to do something about it.”

He went to a treatment centre, found sobriety and started to turn his life around.

“It took some time, about a year and a half working with the family court system, but eventually I was able to get sole custody of my two kids,” he said. “I had to sever the marriage because my wife at that time decided that she wasn’t ready to make those changes in her life.”

He became a single father raising two little girls by himself and away from his community.

“It was right about this time,” he remembers, “that then National Chief Phil Fontaine started to talk about residential schools and brought the subject to light across the country and made it clear that that era of our history had created serious damage to Indigenous people. He called for recognition by the government and he called for change.

“From the time Phil Fontaine began talking about it, to the time Harper apologized and the triggers for common experience payments were discussed for survivors, to the appointment of the Truth and Reconciliation Commissioners and to the tabling of their final report, about 15 to 20 years had passed by.”

North Peigan did not attend residential school but his parents did.

“I was just a product of the environment created by the schools. The Indian Act underwent some changes in the early 1950s and the federal government unloaded a lot of their responsibilities on the provinces.

“That responsibility allowed the provinces to come into our communities and forcibly remove our young kids and put them in non-Indigenous foster homes – this was an era that became known as the 60s Scoop. It was a continuation of the assimilation process all over again or as we recognize it today, cultural genocide.”

Adam North Peigan fell into that slot as a child; he became a victim of the 60s Scoop and thus began his long his journey through the foster care system.

“I was happy when the federal government finally recognized or admitted the serious effects of the residential schools and agreed to compensate victims but at the same time I wondered: ‘what about me and the thousands of others who were caught up in the province’s 60s Scoop’ initiative? We also need some kind of reconciliation, some kind of acknowledgement as well.

“I always knew that I wanted to do something, get involved in some way to ensure that this reconciliation for 60s Scoop survivors was able to happen. I didn’t know what I was going to do, but I never let the idea leave me.”

He waited, sometimes patiently, others times not for the opportunity he needed.

“I waited for a door to open,” he explained, “and that opportunity came in June of 2015 when former Manitoba Premier Greg Salinger stood up in the Manitoba legislature and issued an official apology to all of the 60s Scoop survivors in Manitoba. It was a big deal and as such it was all over the news and all of the national CBC and CTV programmers carried the story. That was a very emotional day for me to see one of our government leaders here in Canada stand up and say ‘I’m sorry.’

“Listening to that apology was a good thing but I wasn’t from Manitoba and their provincial government didn’t remove me from my home, but at the same time I realized that if Manitoba can apologize so can Alberta.”

The day after hearing that apology North Peigan began to write letters.

“I started writing letters to the Alberta government just about the same time that Rachel Notley became the premier here. I wrote to the premier and told her my story and urged her to consider doing what Manitoba had done and issue an apology so that our healing process could begin.

Many letters changed hands over the months that followed but nothing was really being done.

“There was a lot of lip service going on but nothing concrete, nothing tangible was happening. In early June of 2016 I started to meet with my local MLA here in Edmonton Castledowns, Nicole Goring. I met with her several times and shared my story and told her we needed Alberta to apologize and that we needed recognition and a platform toward reconciliation for Alberta’s 60s Scoop survivors.”

Goring was able to set up a meeting between North Peigan and Indigenous Relations Minister Richard Feehan, soon after he was pointed to the position.

“I met with Mr. Feehan and told him my story, suggesting how Alberta’s position on this important issue could be improved by an apology and some kind of action that could bring about reconciliation.

“He listened to me but at that time I was alone and we all know there is strength in numbers so though he listened intently, nothing really came out of that meeting.”

“I watched that ruling and then contacted and spoke to media here in Edmonton – CBC, Global, 630 CHED, CFWE and others about the 60s Scoop and what had happened in Ontario. I began to contact government here once again but nothing really happened.”

Frustrated and out of ideas, North Peigan met with the leader of the opposition, then the Wildrose Party. He spoke with Aboriginal Affairs critic Dave Hanson and after their meeting Hanson agreed to get involved.

“He listened to my story and what I had to say and he was passionate about it,” he noted.

“MLA David Hanson had already done his research on the 60s Scoop and told me that he realized the travesty that I and others had been put through. He told me that he’d bring the matter up in the legislature.

“He wanted to do it to coincide with Finance Minister Joe Ceci’s release of the provincial budget on March 16 this year.”

“When he introduced us we all stood up and it was a very emotional moment; there were a lot of tears shed that day. Hanson told Premier Notley, the Indigenous Relations Minister and everyone in attendance that the 60s Scoop was a tragedy and a dark part of Alberta’s history. He wanted to know what they planned to do about it.  Premier Notley stood up that day and admitted that the 60s Scoop era was indeed a black mark in the province’s history.

That day hasn’t happened yet, but North Peigan said he believes that the premier will follow through in the near future.

“I hope it happens sometime in 2018,” he said, “but in the meantime progress is being made. I was only at home after that meeting for about an hour and the phone rang. It was Minister Feehan; we had a lengthy conversation that day and ever since then positive things began to happen.”

About two weeks after that phone conversation another meeting was set up.

“The premier designated two of her ministers to the file, Minister Feehan and Children’s Services Minister, Danielle Larivee. We met together in the legislature boardroom, along with other 60s Scoop survivors, on March 28th.

North Peigan is hopeful that 2018 will be the year that the Government of Alberta apologizes for the tremendous harm created via the 60s Scoop era.

“Both ministers, Richard Feehan and Danielle Larivee, have been heavily involved in this issue since March this year and progress is being made. They have helped facilitate and move this issue forward.

“I believe that it’s just a matter of getting all the i’s dotted and t’s crossed. Once we have our platform firmly in place, I expect that the apology and a plan to develop reconciliation will happen within the government. I am optimistic and believe the Alberta government is serious about helping us to resolve this very important issue.”

If you are a 60s Scoop survivor and would like to help ensure that the future is no longer hindered because of misunderstandings and/or bureaucratic denial, contact Adam North Peigan by emailing: [email protected]