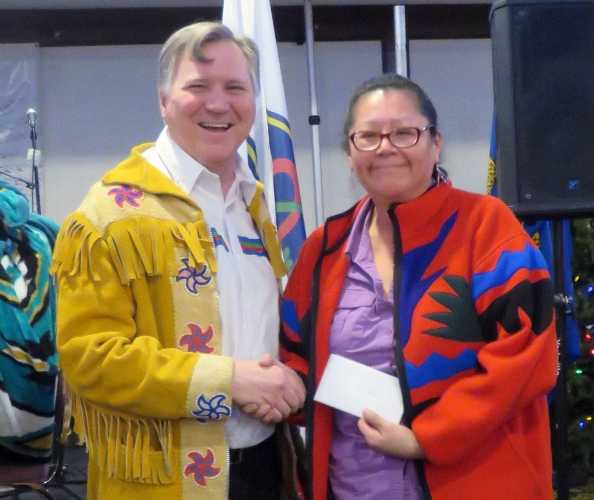 (ANNews) – On December 9, Edmonton-based, Creating Hope Society of Alberta (CHS), concluded the organization’s Five Days of Reconciliation initiative by hosting the fifth and final event with a bannock-making contest and a free traditional beef stew and bannock dinner. CHS also invited two face painters and a balloonist, each of whom captured the attention of all the youngsters in attendance.

There were more than 24 entries in the bannock-making contest, a friendly competition to see which of the competing cooks made the best fried and/or baked bannock, the only two categories that qualified for prize money. When the final bell rang and the last piece of bannock had been tasted, the prize winners, who took home $200 for first place, $100 for second place and $50 for third, were named. 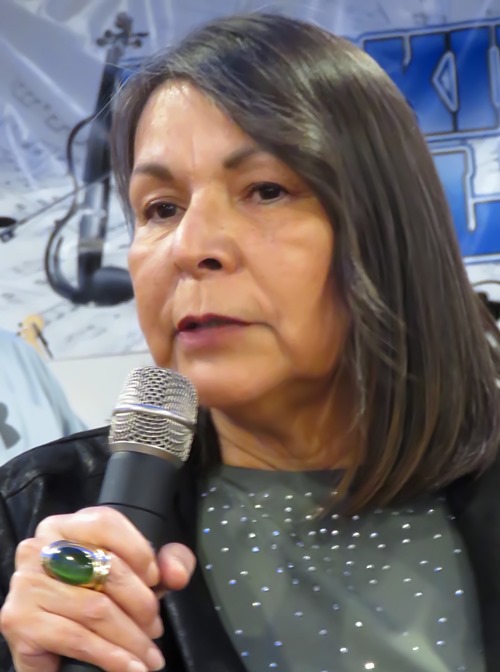 “The feedback we received from those who attended was very positive and we’ve had many requests to hold these types of functions more often,” noted CHS Executive Director Bernadette Iahtail the day after the event took place. “The Elders were very happy to see so many people from different countries come join us; that’s what reconciliation is all about – mixing and mingling and getting to know one another in an atmosphere of friendship and sharing.”

The Five Days of Reconciliation is just one of many initiatives that CHS hosted during 2017 and it was also one of the most successful.

“The purpose of this particular project,” explained Iahtail, “was to engage in a conversation with all Canadians about what happened in the residential schools and include the Truth and Reconciliation Commission’s 94 Calls to Action. We are in full agreement with the TRC’s view that reconciliation between diverse people requires ongoing cultivation of mutual respect and understanding as well as opportunities for us to work together, learn together and play together in friendship and goodwill.” 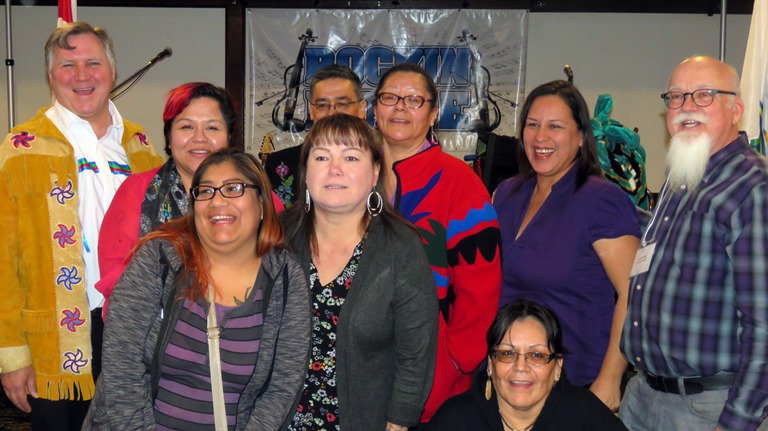 Bannock contest winners and judges pose for a photo.

To complete the project, CHS organized five different events, each based on the teachings of the Medicine Wheel, teachings that include children, youth, adults, Elders and the community as a whole.

The events included positive and meaningful activities such as opening prayers, smudging ceremonies, honour songs, a mini-round dance, viewing of a reconciliation documentary, entertainment, celebrations of Indigenous culture, tradition and lifestyle, as well as an opportunity to participate in a contest about the meaning of reconciliation. A number of keynote speakers also participated. 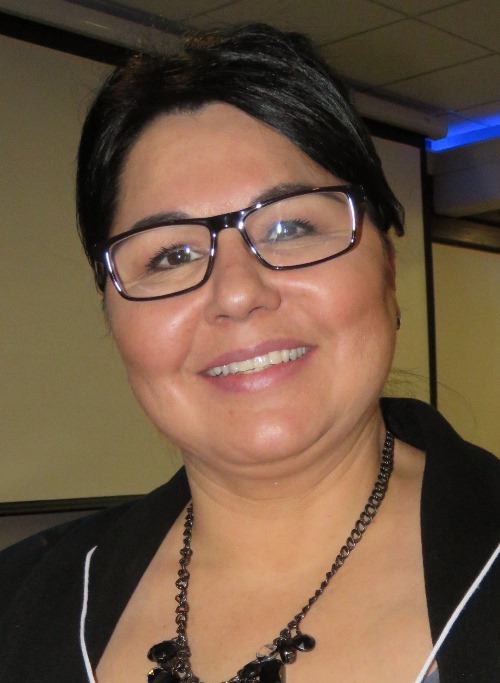 The first of the five events took place on May 18. Children had the opportunity to hear the stories of the Elders who shared their knowledge and life’s experiences.

The second event, on September 15, was primarily for adults and embraced discussions that could help mothers and fathers. This event, noted Iahtail, “included conversations about how we can provide support for families who are struggling with the ongoing effects and issues as a result of the residential school era.”

Other topics included the 60s Scoop and children still being apprehended by the current, and failing child welfare system.

The third event dealt with the topic: Youth and Reconciliation. The topic, meant for both Indigenous and non-Indigenous youth asked them to complete five-minute documentaries on the subject: What does reconciliation mean to me?

The fourth event was held on November 18, to commemorate International Children’s day. “The theme dealt with Children and Reconciliation,” explained Iahtail.  “As a society we joined together with the community and celebrated the lives of both Indigenous and non-Indigenous children.”

The fifth and final event, which took place on December 9, included BannockFest and was an opportunity for cooks to compete in the cash prize contest. The afternoon got off to a great start as contestants lined up at the tables, displaying their various styles of bannock while waiting for the judges to come and taste their entries. 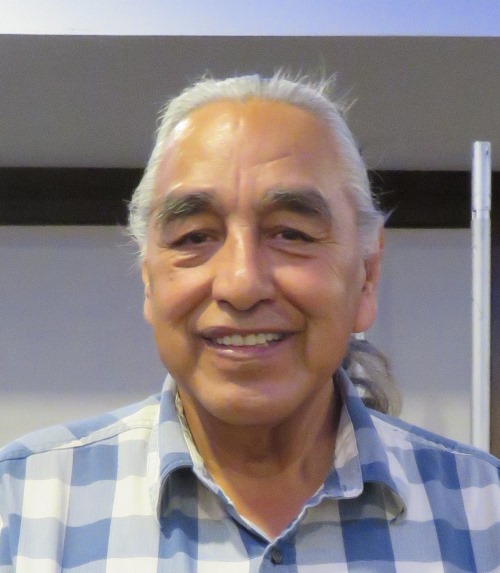 Elder Emil Durocher got the afternoon underway with a prayer and some words of wisdom before turning the mic over to co-emcee Adrian LaChance, a polished and professional entertainer and speaker who shared the afternoon duties with partner David Long, a professor at King’s University.

“Our Five days of Reconciliation project was initially undertaken to talk about and deal with the 94 Calls to Action (recommendations) delivered by the Truth and Reconciliation Commission last year,” explained Iahtail, “but it has turned out to be even more than that. When you put people together in conversation new topics arise and many questions are asked. We don’t have all the answers but we are continuing to seek solutions. Child welfare is one of the biggest issues and concerns among Indigenous peoples today, and of course, it is one of the main topics on the CHS agenda each and every day. The Serenity case has created a lot of conversation, both in the community and in the local and national media news broadcasts. The message that I get from the people is a seemingly simple one, but it’s going to be a complex process to bring it to fruition – until we have our children being cared for by Indigenous caregivers; until we have our children in Aboriginal homes, and whenever possible, with their own families, reconciliation will be difficult to achieve. Our children are our future and if they are to fulfill their destinies, we need them to come home.” 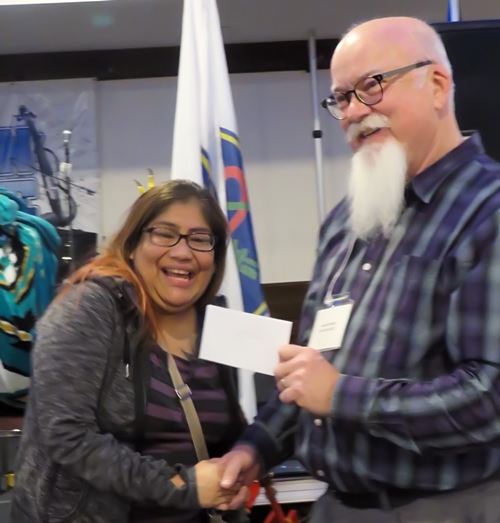 Professor of Sociology at King’s University, David Long, has been working with Iahtail and the CHS for the last ten years.

“It’s been a great honour to do that,” he said. “These Five Days of Reconciliation have been part of the Canada 150 Celebration. Participating in these five days of reconciliation our hope was to open up to Edmontonians and let them know that there are many ways in which we can reconcile. There are many ways we can walk together, learn to respect one another, enjoy and celebrate each other.” 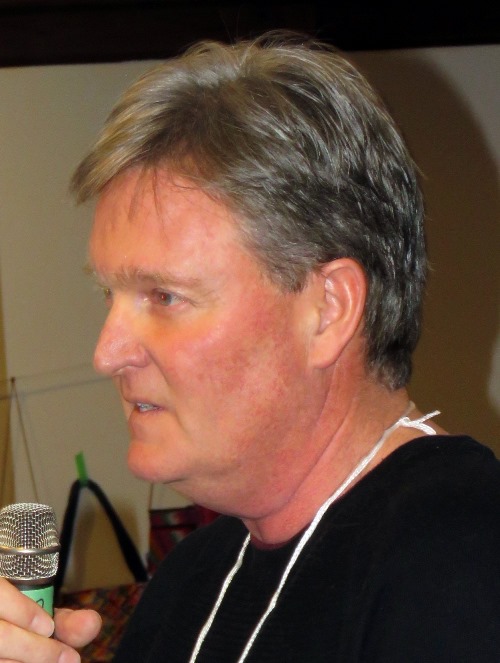 Long also read a note from newly elected Ward 4 City Councilor Aaron Paquette, in which he stated: These five days have been an important step in acknowledging our past, learning from our shared experiences and healing our hearts. With the commitment of all citizens we will achieve a better, stronger city.”

Long is committed to cultivating a deeper understanding and appreciation for the experiences, strengths, and contributions of diverse populations in Canada, and explores this in his book, “Visions of the Heart: Canadian Aboriginal Issues,” which received numerous awards. He works with a variety of men’s groups, human service organizations, and levels of government, and recently served on a national task force to establish a Canadian Men’s Health Network. He is also a part of the Canadian Father Involvement Initiative. 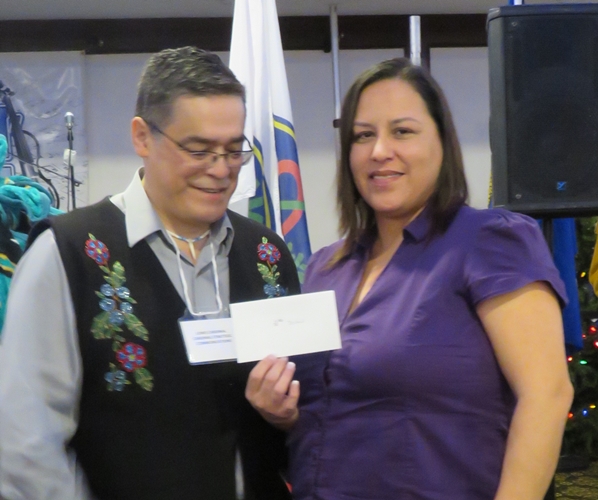 Lewis Cardinal addressed the gathering and noted: “this event is a very important (venue) for our people. Just a few years ago we didn’t realize that these types of conversations would take place, where we as Indigenous people would be taking our rightful place in this society. When I see these kinds of gatherings it gives me hope, it gives me a sign that we are on the right road toward reconciliation.”

Cardinal also talked about treaties and noted that “they are not just a land agreement written on a piece of paper – treaty is about relationships. When we as Indigenous people made treaty with other nations that ceremony was considered an adoption ceremony. A treaty is not just a piece of paper, but a covenant, a relationship process that we participate in.”

“This is my first time speaking to a gathering like this and it gives me great honour that Bernadette asked me to speak here today,” noted Kamau. “I came to Canada from Kenya 20 years ago, so I am a guest in this country, this city and in this room today. I feel honoured to be here today – to join with this family – you even have Elders here just like we do back home. Today I see a vibrant community celebrating its culture, its languages and its people. I see children, youth, adults and Elders and I feel very much at home. 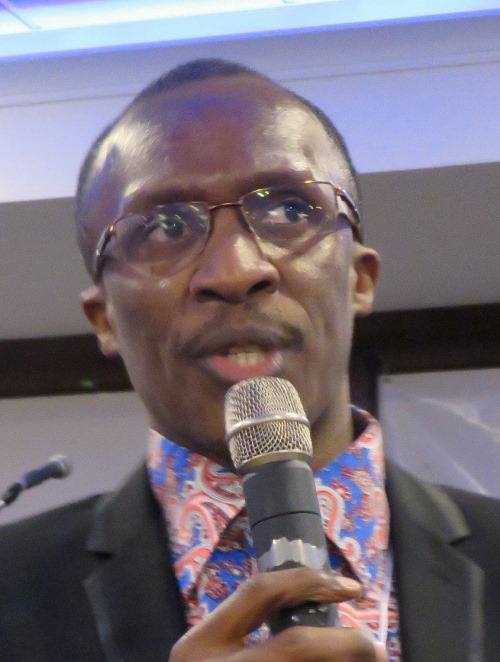 “I work with immigrants coming to Canada and one of things I make sure they know about are the country’s Indigenous peoples and what they have endured over the (last 300) years.”

He spoke about his homeland, noting that his people too have suffered at the hands of others.

“Socially, politically, economically – in many ways we have suffered the same fate. All I can say is that I am grateful to be here and I am committed to being an effective ally in this journey toward reconciliation. To do that I try and listen more than I talk, participate more than I don’t. To achieve reconciliation, we have to come together, we have to be honest, and truthful and keep doing what we are doing today – sharing our experiences and enjoying our lives together in friendship and understanding. Through this way we will achieve what we all seek – reconciliation.” 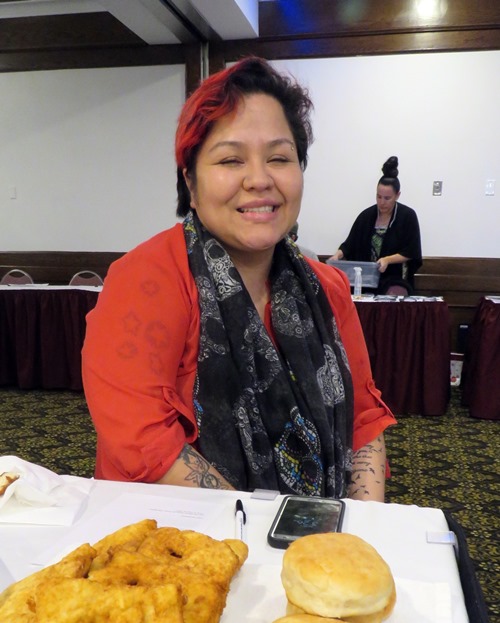 Daylene Papastesis entered both fried and baked bannock_ both were scrumptious! 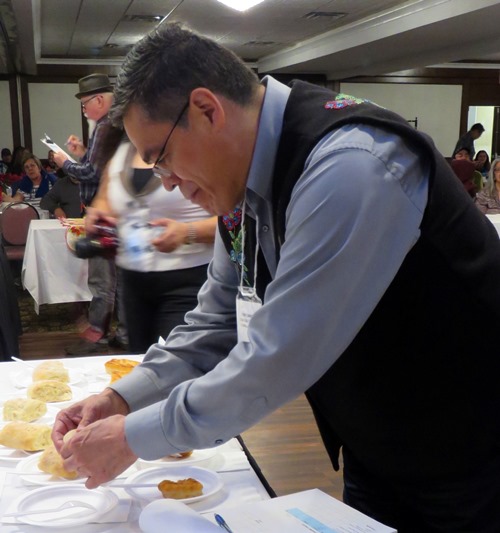 Judge Lewis Cardinal samples food up front while Judge Allan Emond checks his notes at the end of the table. 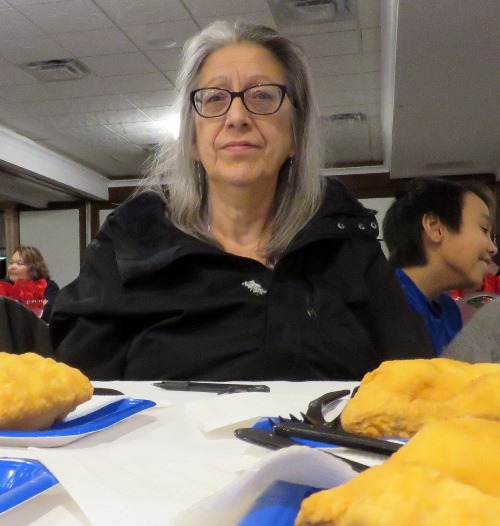 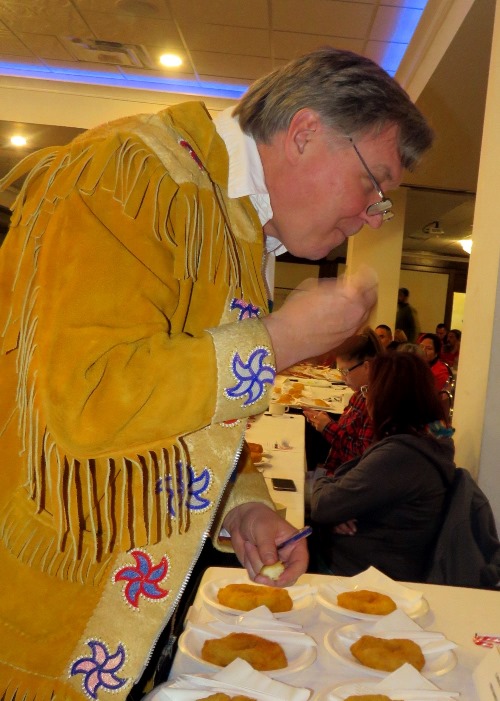 Judge Feehan samples the entries and knows he’s got a tough job ahead.