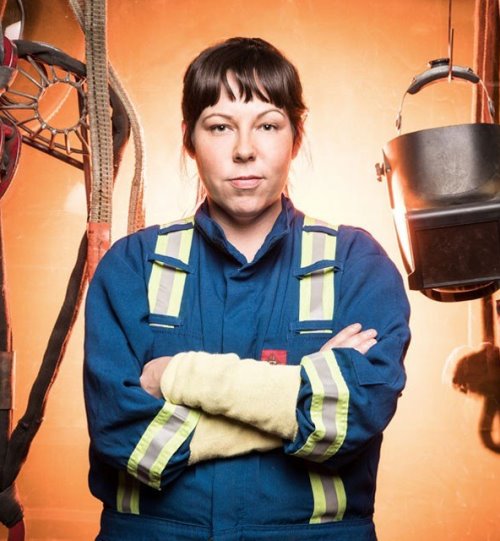 (ANNews) – In October 2017 Edmonton-based Women Building Futures (WBF) launched a new initiative and for the first time in its 20-year history implemented an awareness campaign that not only embraced local and provincial radio and national television, but also sourced various internet and social media platforms that enabled the campaign to reach communities and organizations across the country.

The first phase of the campaign, called YOU GOT THIS took place between October 30 and November 19, 2017 with the second phase running from January 15 to February 4, 2018. Huge numbers of Canadians took part and when the campaign had run its course, WBF saw substantial increases in all social media platforms and email and telephone communication. Page views increased by more than 160 percent; there were nearly 67,000 campaign video views, a 228 percent increase in phone calls and a 265 percent increase in new applications.

“This new awareness campaign has a national focus,” explained Tammy Forbes, WBF Director of Communications and Government Relations. “YOU GOT THIS wasn’t designed as a recruitment campaign; what we and our partners are trying to do is to raise awareness that the trades can and should be a first-choice option for women.”

Forbes said that when “women decide they want to pursue a career in the construction and maintenance trades, we want to ensure that they get the support they need from both family and friends and from industry. We want society to see that trades-related fields are seen as a very positive career option for women.”

The second goal of the campaign, she noted, embraces industry.

“We are also encouraging and supporting industry in recognizing that hiring and having a diverse workforce with skilled workers, including women, is a very good business position for them to make.

“We have an extraordinarily strong network of stakeholders, industry and government supporters and ambassadors; the success we’ve achieved over the years by training women in helping them to secure employment wouldn’t have been possible without them.”

In fact, those partnerships have gone a long way in helping WBF gain the ground and earn the respect it’s received during the past 21 years. A list of about 20 Strategic Partners, dozens of Workforce Development Partners and a comprehensive list of “Employers of Choice” companies and corporations can be seen on the WBF website.

“WBF offers a tremendous contribution to the workforce and we are hopeful that this initiative will encourage even more businesses and industries to connect with us,” said Forbes.

“We’d really like to see the numbers of women employed in construction and maintenance trades jobs rise beyond the five or six percent they currently represent. WBF-trained workers aren’t just women, they are qualified, skilled tradespeople who are fully prepared and ready to make a positive impact in the companies that employ them.”

WBF trades training begins with assessment and workplace culture and includes academic upgrading when needed, fitness to work, financial literacy, comprehensive safety courses and hands-on experience. WBF is a Social Purpose Organization (SPO) and registered charity, that has long been the leader in construction trades training for women. Their graduates, “95 percent of whom are employed,” are succeeding in the trades every day and maintaining their employment. The organization also works with employers to develop custom training programs to meet their needs, providing recruitment, assessment, hands-on training and job matching services.

In the course of her work, Moses said that while she sees a lot of people on her visits to First Nations, Métis and urban-Indigenous communities throughout Alberta, her conversation is geared primarily for women 18 years of age and older.

“The message of our awareness campaign has been well-received and in fact has brought about an interesting result, though we didn’t intend it that way. The fact is that the numbers of women contacting us for more information and to ask about enrolment in a trades training program has seen a substantial increase since this campaign got underway last October.

“The interest in the communities about trades training opportunities for women is huge; our most recent Indigenous-specific training program saw the participation of women from 43 different Indigenous communities in Alberta.”

During the past year the numbers of women WBF has actively engaged with has risen from the mid-300s to more than 1150.

Moses said that she is “working together with our campaign partners, including the Native Women’s Association of Canada (NWAC) to both build better and stronger relationships with Indigenous communities and to continue to encourage more Indigenous women to become involved in the trades.”

Community support has been “fantastic,” noted Moses, who said that “our approach to relationship and partnership building with all of our partners is built on complementing, (not duplicating), the good work that other people are already doing out there.”

Moses emphasized that trades-related employment “aren’t just jobs that we are encouraging both Indigenous and non-Indigenous women to get involved with; these are truly transformation careers that will have a positive impact on the graduate, their families and their communities.

Valerie Moses is a member of the Alberta First Nations Women’s Council on Economic Security. Passionate when it comes to reclaiming women’s leadership roles and economic freedom of Indigenous communities, Moses is a member of Ontario’s Six Nations of the Grand River. In 2013 she was recognized as an emerging female Indigenous leader in Canada and participated in the Indigenous Women in Community Leadership program at St. Francis Xavier University, Nova Scotia. She is a former member of the Aboriginal Education Council at Brock University in Ontario where she studied Aboriginal Women’s Education.

Last year WBF graduated 190 students, a 20 percent increase over 2016. Thirty-five percent of the graduates were Indigenous women. Graduates who secure employment in the trades will also experience huge financial benefits.

“Though it isn’t the primary reason we encourage women to take a serious look at a possible career in the trades,” noted Forbes, the fact is “graduates who secure employment” as a first-year apprentice in their trade of choice “will realize an average increase in salary of depending on the trade, earnings ranging from 132 to 250 percent.”

And it’s almost never too late to begin a career in the trades.

“Every woman who comes here is looking for opportunity and choice and that’s what Women Building Futures offers.”

Established in 1998, Women Building Futures is a leader in trades training for women, with extensive experience recruiting women into the heavy industrial workforce. The organization’s mandates are simple: to attract more women into the construction trades, provide trades training that meets the needs of women and industry, include mentorship and long-term support for women just entering the trades and for those already in the trades. The organization also examines and addresses the systemic barriers to the recruitment, training and retention of women in the trades and increases not only the number of women in the trades, but also the number of instructors and mentors.

Women Building Futures (WBF) is also gearing up for its inaugural WBF WORK PROUD Summit 2018: Trade Perspectives on October 2-4, 2018 at the Radisson Hotel in Edmonton, Alberta. This annual event will assemble leaders, influencers, and change-makers to share best practices to create workplaces that meet the challenges of the next generation.

For more information and to apply for a training program visit womenbuildingfutures.ca or call 780-452-1200.

Women Building Futures CEO appointed to NAIT Board of Governors

Be the first to comment on "Women Building Futures: Trades are a positive career option for women"