(ANNews) – The World Indigenous Nations Games came to a close on July 9, 2017 after an action-packed week with over 20,000 spectators and 1600 athletes competing on Indigenous lands, within the Treaty Six Territory.

From July 2 – 9, 2017, the Treaty Six First Nations rolled out the carpet and welcomed the WIN Games, providing a “unique opportunity for Indigenous Peoples to present to the world, their centuries old traditional games, sports and cultures while reinvigorating passion and pride for sport, traditions, and culture in Indigenous Peoples.”

Wilton Littlechild, Grand Chief of the Confederacy of Treaty Six First Nations and a key member of the World Indigenous Games organizing committee thanked the Indigenous athletes of the world, coaches and spectators for attending the 2nd WIN Games on Treaty 6 Territory. He also thanked the Treaty Six communities for all their help.

“I would like to express on behalf of myself and organizers, our heartfelt gratitude to the leaders and band members of Samson Cree Nation, Ermineskin Cree Nation, Louis Bull Tribe, Montana Band, Enoch Cree Nation, and Alexis Nakota Sioux for opening up their hearts and communities to the World Indigenous Nations Games 2017,” stated Grand Chief Littlechild.

“We are very thankful for the support of these Nations. When everyone else said no, the First Nations stepped up and said yes to the healing power of traditional sport, recognizing its long-term impact on the physical, mental, emotional and most importantly the spiritual aspects of our being. 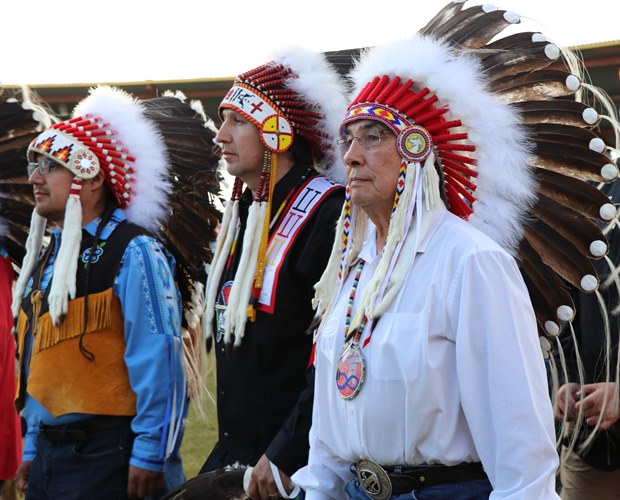 “The spirit of sharing, caring and cooperation was very evident in the Treaty No. 6 First Nations Territory. The First Nations of Enoch and Samson Cree Nation were hosts for the Athletes Villages. Samson hosted the Opening Ceremonies, which drew an estimated 5000 people, and was also host to the International Indigenous Youth Conference. Ermineskin Cree Nation hosted the Basketball Tournament, Indian Horse Relay and Rodeo. Louis Bull Tribe played host to the 10km Men’s and Women’s Foot Races, with the famous Tarahumara runners from Mexico taking first and second. The Alexis Nakota Sioux Nation hosted the exciting Canoe Races, which Panama swept. Many members of Montana Band also stepped forward in an organizational and volunteer capacity. The City of Wetaskiwin also donated the use of the Manluk Industries field for the soccer tournament and the Enoch Cree Nation hosted the Closing Ceremonies.”

The Opening Ceremony kicked off with a traditional prayer followed by a Grand Entry of officials, flag bearers, chiefs, athletes and representatives of foreign nations. Several chiefs marched in the front row including Treaty 6 Grand Chief and WIN Games founder, Wilton Littlechild, Enoch Chief Billy Morin, past Treaty 6 Grand Chief Tony Alexis, and others. Aboriginal veterans and the RCMP were represented as were delegations from several countries, including Brazilian Chief Marcos Terena who had welcomed delegates to the very first WIN Games two years earlier in Palmas, Brazil.

The Games, according to Littlechild and organizers were meant “to promote positive, healthy lifestyles for Indigenous Peoples, through sports, recreation and cultural programs.” And they met that goal in spades. 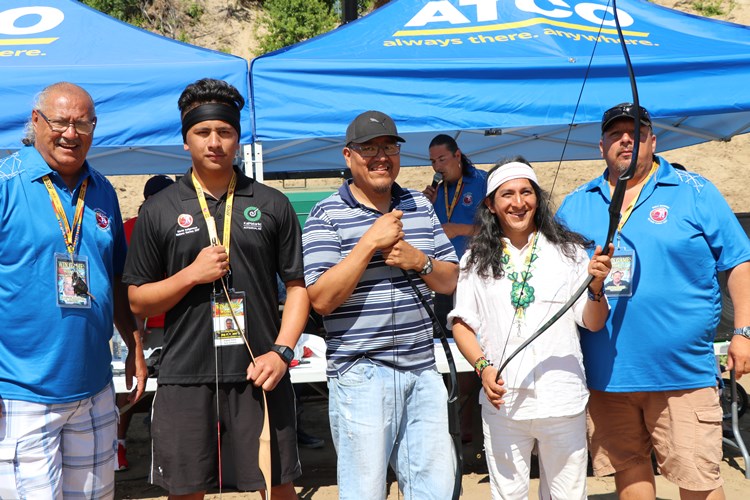 Entertainment showcased a number of very talented Indigenous performers and bands, including: Stephanie Harpe Experience, Asani, blues icon Murray Porter, traditional singers Northern Cree, Terri Anne Strongarm, a Russian on a Jew’s Harp who really impressed the crowd.  Debbie Houle sang the Canadian anthem in Cree, French and English, while Strongarm sang the American anthem to a stunned audience who were enthralled by her powerful vocals.

On Tuesday, July 4th, swimming and bow and arrow were contested while Dene Games from the Northwest Territories were demonstrated under the guiding hand of Peter Daniels and his contingent, many from the Fort Smith area. This group presented several northern games such as: arm wrestling, finger pull, one and two-foot high kick, knuckle pull, log push, stick pull, etc. These demonstration events were not in medal categories but they take great strength and dexterity. They attracted a good-sized crowd and visitors of all ages enjoyed trying these traditional events when urged to do so by Daniels. 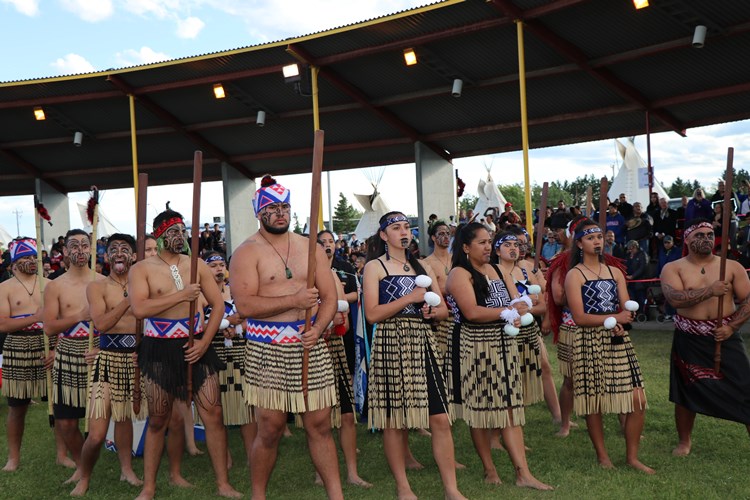 The balance of the week featured soccer, basketball, lacrosse, foot racing, horse racing and a rodeo. The head referee/judge for sports was Saskatchewan’s Eugene Arcand who has an extensive background in sports of all genres.

Aside from the sporting events, a number of conferences were held that focused on everything from reconciliation to Treaty rights, land and water issues, housing and education, environment, as well as separate gatherings for Elders and youth. The youth event featured Supaman and Walon Pahona. The Games were additionally blessed with songs, dances, music and stories from many of the countries including Canada. As such, a good many of the delegates went away with great memories, new skills, and new friendships.

Despite a number of hardships, small budgets and last minute scheduling changes (i.e. times, venues), when the event got onstream, they appeared to delight and interest the many spectators. Last but not least, they provided a welcoming opportunity for visitors from all over the world to come together, make friends, learn, teach, and share experiences.

Grand Chief Littlechild was very appreciative of the hard work and dedication of the many individuals and organizations who helped with the event.

“The contributions from organizers and volunteers cannot be measured,” explained the Grand Chief while expressing appreciation for their efforts. “Along with the athletes they endured unusually high temperatures, rescheduling of events, and everyone kept long hours to ensure the needs of the athletes were met and venues were ready for competition. There was a lot of work happening behind the scenes once government funding was confirmed.”

Grand Chief Littlechild concluded, “Despite adversity, the World Indigenous Nations Games 2017 did what it set out to do, promote peace, diversity and reconciliation and is instilling passion and pride for sport, traditions, and culture in Indigenous Peoples around the world.”

Bringing the World Indigenous Games to Treaty 6 Territory was a dream come to fruition for Grand Chief Wilton Littlechild, who conceived the concept some forty years ago. In 1977, at the World Council of Indigenous People held in Kiruna Sweden, he proposed an international Indigenous Games that would include a strong cultural component alongside an Olympics style sporting event. But one has to move gently on Mother Earth and it took longer than expected – 38 years for the first World Indigenous Games to be held in Brazil in 2015. And a full forty years to bring the games to Treaty 6 Territory.

Littlechild, the dreamer and creator of the Games is an acclaimed athlete who worked with the late John Fletcher in instigating other Indigenous Games including the North American Indigenous Games which will be held later this summer in Toronto.

The Grand Chief has many accomplishments. In addition to his work as a Commissioner with the Truth and Reconciliation Commission, he has continued to run his own law firm on the Erminiskin First Nation in Maskwacis, Alberta, and maintains his commitment to sport. He has been inducted into seven Sports Halls of Fame.

Wilton Littlchild has been awarded the Order of Canada and in 1993, the Canadian government awarded him the Canada 125 Medal. He is a 2015 Laureate of the Indspire Awards and has been honoured with the Alberta Award of Excellence.

Enjoy this photo gallery provided by the World Indigenous Games. 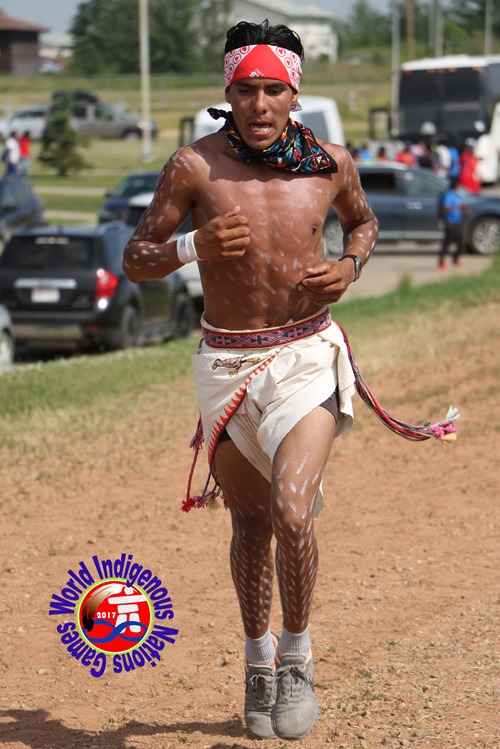 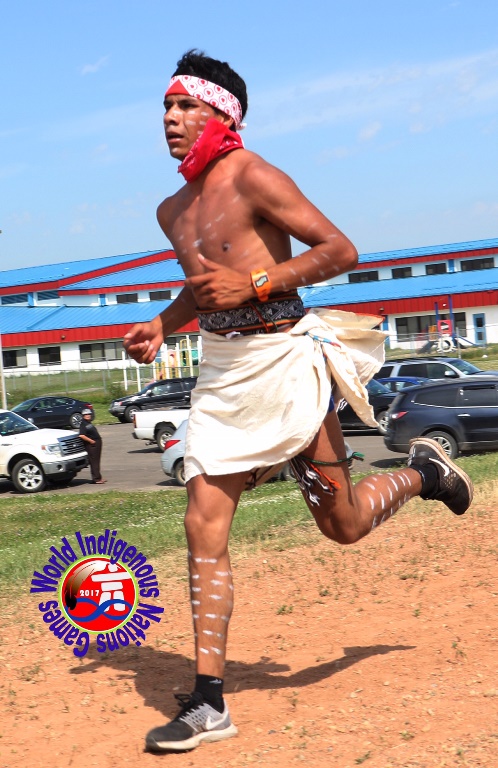 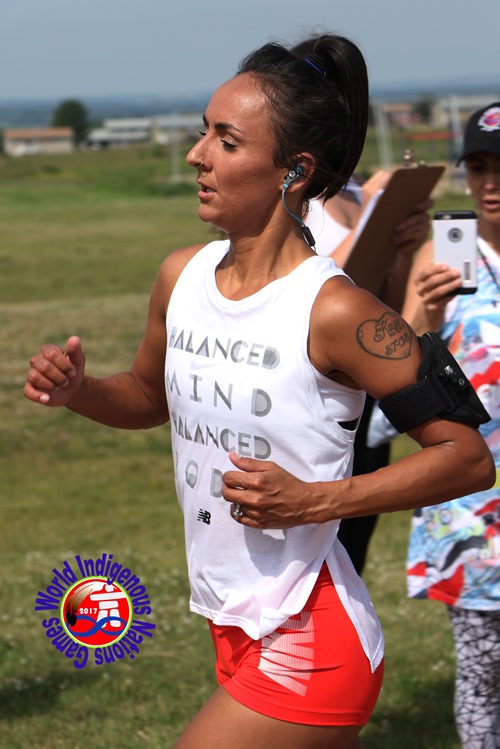 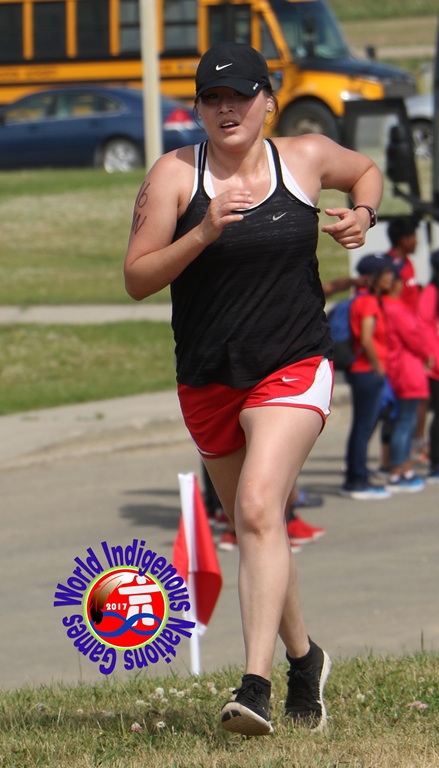 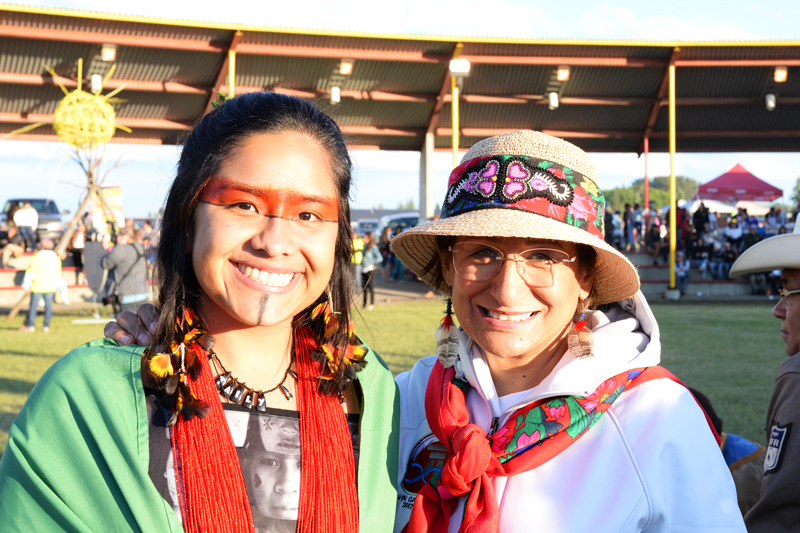 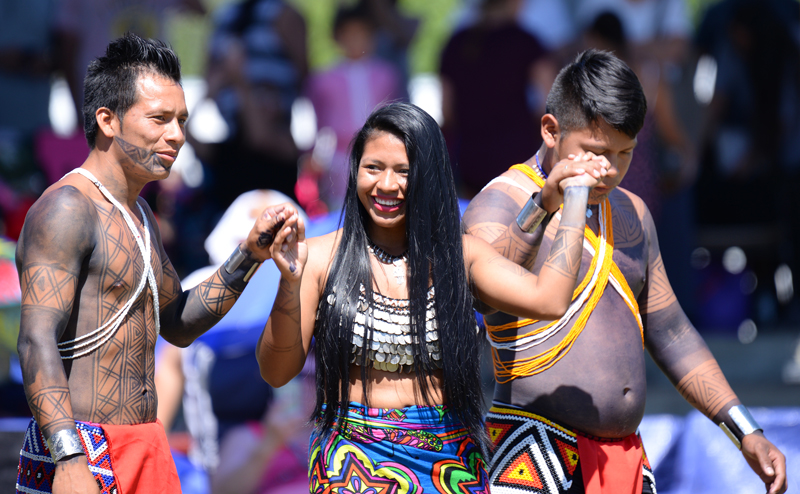 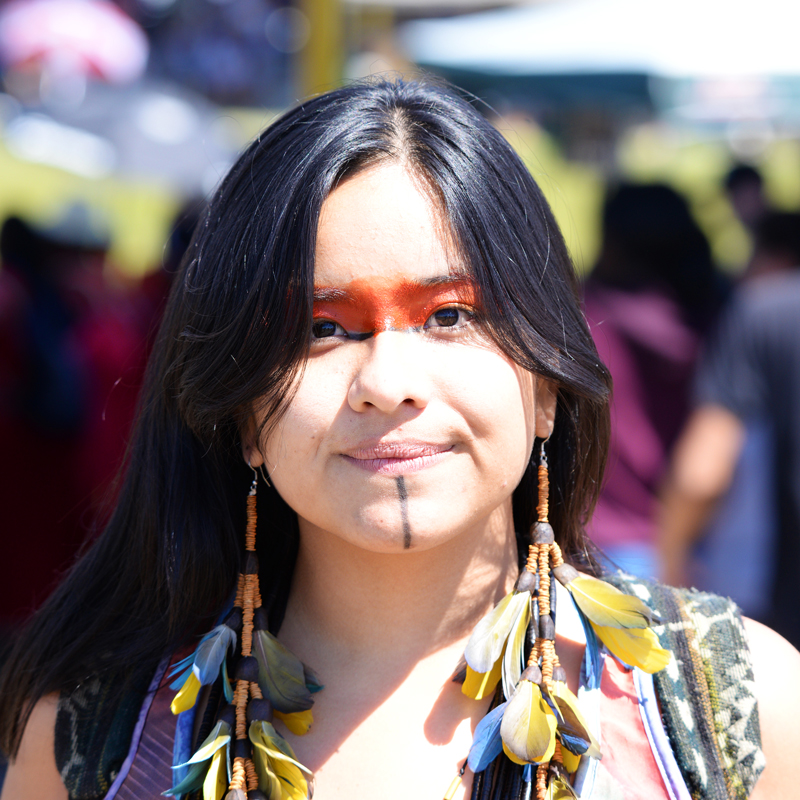 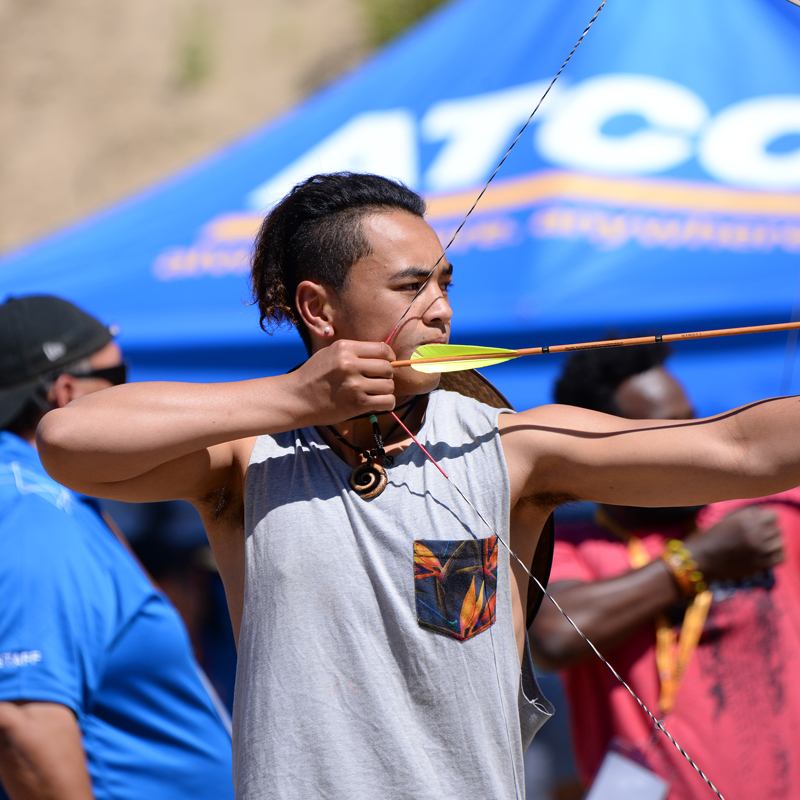 Be the first to comment on "World Indigenous Nations Games promotes peace, sport and culture"