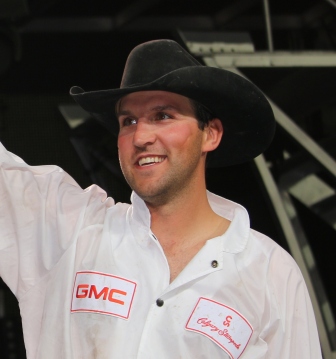 This year was extra-special for chuckwagon reinsman Kurt Bansmiller and owner Tsuu T’ina Nation as their rig posted a 1:16:73 time in the final championship heat 9 of the Calgary Stampede’s Rangeland Derby. The win was doubly sweet for Bensmiller who, in the process, beat out the 12-time champion driver, Kelly “The King” Sutherland. Placing third and fourth were Logan Gorst and Vern Nolin.

This made it back-to-back wins for Bensmiller who won the title in 2014 and needs one more to tie his dad, Buddy, a veteran driver (now-retired) with three championships under his belt. The July 12 race was exhilarating for Bensmiller who admits other drivers are “gunning” to dethrone him.

In addition, the 32 year-old won the aggregate crown the day before which netted him a brand new GMC truck. 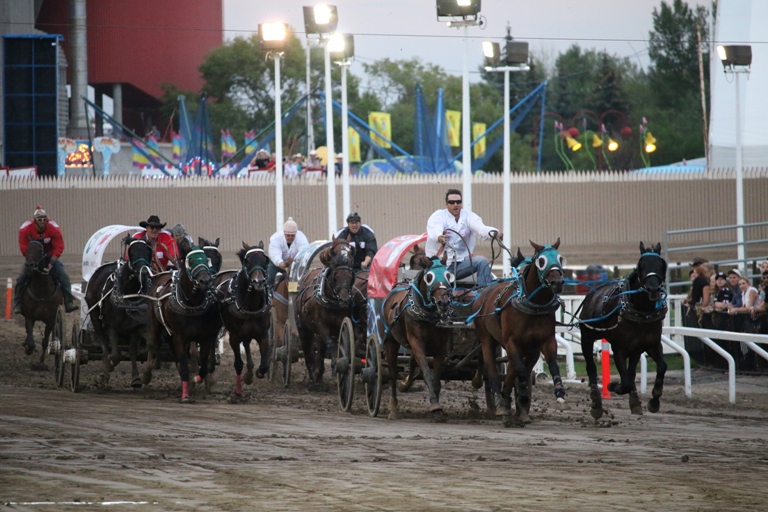 Kurt Bensmiller crossing the finish line first at the Rangeland Derby at the 2015 Calgary Stampede. Article and photos by Terry Lusty

Over the 10-day course of racing, Bensmiller won six rounds at $6,000 per plus the coveted crown, including a beautiful bronze award and a cool $100,000!

His father, Buddy, couldn’t help but puff out his chest over his boy’s accomplishment. “It’s not an easy task, it’s tough to win,” he chirped. “So much can go wrong and sideways.” It also takes a lot of hard work and extreme focus. The former champ ought to know – he’s been there, done that (in 1979, 1989 and 2003).

For his son Kurt, it was an exciting and amazing experience. He’d done well through the week and admits to his good fortune in having the “Number One barrel” to start from. He further alluded to the help he received in the way of family support and the “great teamwork” of his four thoroughbreds and his two outriders, legendary Shawn Calf Robe and Wayne Wright.

“I had a good team behind me,” said Bensmiller. Sporting a huge smile and as huge a grin in doing some “pay-back” over Sutherland. He currently sits second to Kirk Sutherland of the Professional Chuckwagon Association. After winning at the Ponoka Stampede a short time back, Sutherland was favoured to win the Calgary Stampede. But then, “everybody says they’re going to win,” says Bensmiller who now hopes to catch up to his dad’s record of three championship titles. 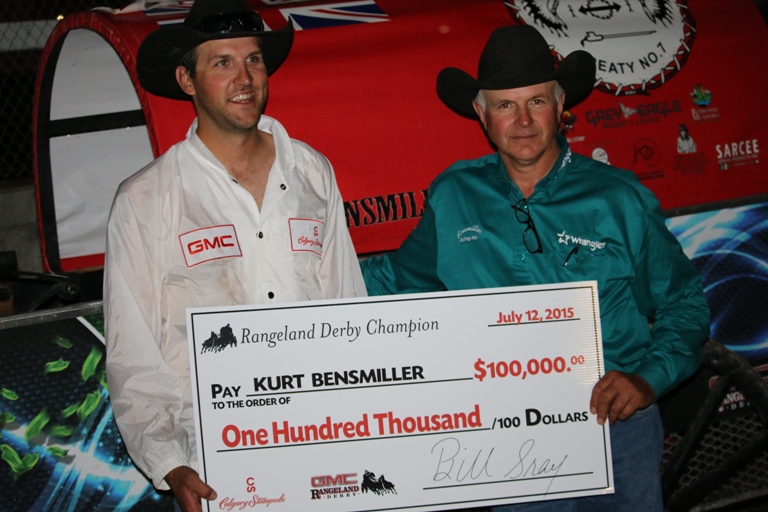 A “three-peat?” Only time will tell.

Meanwhile at the Indian Village, things shifted regarding this year’s Indian Princess. As things turned out, the selected princess had a change of heart and stepped down because she “couldn’t commit the time required,” explained the Stampede’s CEO, Warren Connell. Rather than go through another round of selection, the princess alumni were installed to fulfill what is generally the Princess’s duties. It turned out to be a good time for this collaboration, to commemorate the 50th anniversary of the Indian Village Princess. The roster now includes the very first princess, Gloria Littlelight, a high school grad and former barrel racing champion.

Once again, the Indian Village campers graced the grounds with their presence and treated visitors from all over the world to dance demonstrations, craft sales, open visits of their lodges, tipi races, bannock booth, and more.

As is customary, thousands of visitors were accommodated in having their pictures taken with First Nations people in full regalia. In so doing, they conducted themselves both patiently and friendly. Some of the visitors joined in when it came time for the Inter-tribal Dance and the emcees took the opportunity to explain the different styles of dancing to the public, in addition to providing some of the background history and protocols. 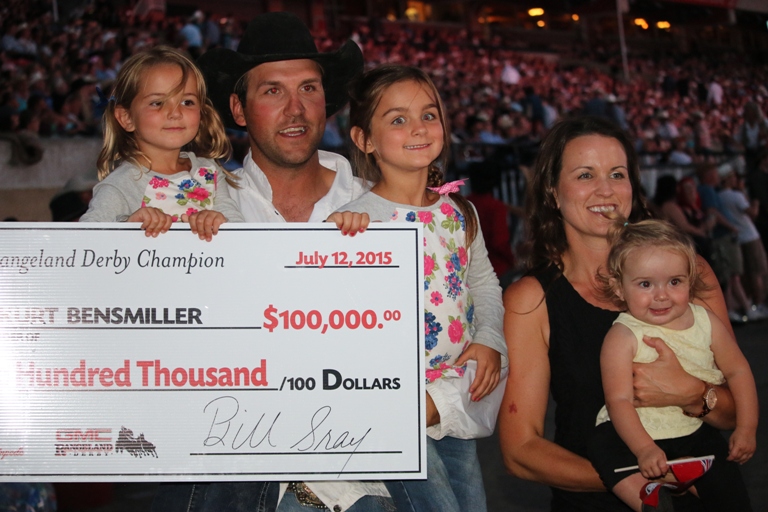 Kurt Bensmiller celebrates with his family.

It was announced this year that the village will be in a new location by next summer – in the northeast corner of the grounds, across the river and just on the other side of Kids World. According to Connell, it’s a venture that is creating “a lot of excitement” among families.

The new site already has some permanent fixtures in place such as public washrooms. The stage area for dancing, explained Connell, “will be laid out better” than at the current location. Also, the view will be appealing with the river flowing by in the background.

A sizable 7,000 square-foot building called the ‘Sweetgrass Lodge’ will be in place to accommodate the committee’s room and other office space. Additionally there will be permanent change rooms, showers, etc. The facility will also be part of the ongoing RCMP and city police educational programming and a place where First Nation Elders will mentor Native youth so they can become familiar with their culture and traditions.

This year’s Western Art Auction, now in its 35th year, included two Aboriginal pieces, one by renowned Metis artist Dennis Weber of Kamloops, B.C., the other by the late Percy (Two Gun) Plainswoman.

Weber is originally from Prince Albert, Saskatchewan, and works in pencil, charcoal and oil. Next door, in B.C., he instructs young people and is a member of the Federation of Canadian Artists and the Canadian Institute of Portrait Artists. A familiar face among many of his colleagues, Weber is also an accomplished flute player.