The work of the Truth and Reconciliation Commission (TRC) is done. The final chapter drew to a close May 31 – June 3 in Ottawa as thousands of residential school survivors, supporters, frontline workers, politicians, academics, clergy, media types and others came together in an emotional wave of commitment, contrition, joy and sorrow, hope and peace, solidarity and reconciliation.

Many of course, made the journey to acknowledge and be part of the unfolding history of the residential school survivor’s movement that has been making a profound mark on the history of this country.

It is a movement that’s been gaining momentum, attracting thousands of Aboriginals and non-Aboriginals alike wanting to right the wrongs of an horrific system that is indelibly stamped on Canada. 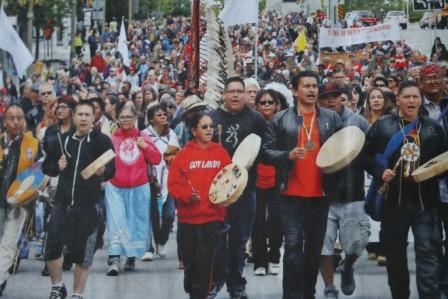 Drummers led the way as thousands joined the Walk for Reconciliation in Ottawa on May 31 as part of the final event of the Truth and Reconciliation Commission. Article and photos by Terry Lusty

Accommodations in the nation’s capital were brimmed to capacity as local hotels and motels attempted to house the scores of visitors that drove or flew in from points throughout the country. Indeed, they came from coast to coast to coast, from the Yukon, Northwest Territories and Nunavut as well as the provinces and parts of the USA.

Apart from the capital city’s restaurants and streets-in-general, the main venues for activity were the Delta Hotel and Marion Dewar Plaza in front of Ottawa’s city hall where concerts were held and arts and crafts tent-booths were situated.

If never before, the quest for redress of an unsavoury time in history has definitely reared its head and continues to command the undivided attention of a growing international audience.

One could not help but be impressed as somewhere between seven and ten thousand people walked the five kilometre route, starting from a school in Gatineau, Quebec, and winding its way to city hall in Ottawa. The Walk for Reconciliation saw thousands step out from the shadows and into the light, side by side, shoulder to shoulder.

At the halfway point, Victoria Island, thousands more leapt into the picture to join the excited walkers. There were babies in strollers, seniors and handicapped people with canes, crutches, walkers and wheelchairs, as well as cyclists and joggers.

They walked to recognize and honour the residential school children of yesteryear, at least 150,000 of them, of which an estimated 6,000 died (from abuse, disease and neglect). They walked to also recognize those still alive and living with the trauma of their past and their hope for the future. 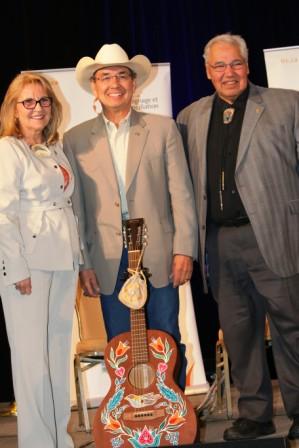 The moment so many waited for – the delivery of the final TRC report and its findings and recommendations – finally arrived June 2. It was presented at the downtown Delta Hotel where a jam-packed ballroom of people from all walks of life anxiously awaited the presence of Chief Commissioner Judge Murray Sinclair and fellow commissioners Dr. Marie Wilson and Chief Wilton Littlechild.

Sinclair kicked off the special presentation by citing a litany of historical facts about the origin and developments of the Kelowna Agreement that established the Common Experience Payment routine and, subsequently, the TRC. He informed those present of the government’s mistreatment of Aboriginals in a country that supposedly opposed apartheid and colonial conditions while boasting of its embracement of rights, freedoms and equality for all inhabitants. And, all this, while removing children over seven generations from their homes and communities, confiscating their traditional territories and resources and stripping them of their cultural identity, customs, religion and spirit and thrusting them into residential schools meant to remove them of their “Indianness” and assimilate them with the rest of European/mainstream society.

Sinclair admitted, “We have a long way to go.” He explained how survivors were allowed to tell their stories in their own way and not subjected to “cross – examination.” As children growing up in those institutions of learning, and saddled with various atrocities and unpleasantries, they became “haunted by their memories.”

“Words are not enough, political action will be required” to set things right, he stated. This, he added, is Canada’s “opportunity at a second chance” to illustrate that Canada “respects and protects all cultures.”

Admittedly, the recommendations will mean a huge commitment of labour and expense, a lot of expense and those in the know were quick to suggest, on the side, that this country’s government would never accept all of the recommendations.

Commissioner Wilson reported that there were thousands, approximately 6,000 or more, children who perished by one means or another in the schools. Many of those “were not recorded” and “most of the bodies of the children were not returned home for burial,” she said.

Wilson further challenged educators to collaborate on including Aboriginal history and culture in the school curriculum, in addition to collaborating “with Elders to address Aboriginal spirituality.” 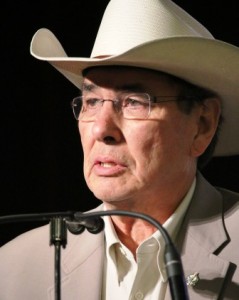 Chief Wilton Littlechild, a survivor himself, was the final presenter on the TRC report findings and recommendations. This he did in fine style, thanking all survivors who demonstrated great “strength” as well as “courage and bravery,” in stepping forward to reveal and share their innermost feelings and stories in public and private formats. The stories ranged from physical, spiritual and emotional abuse to sexual abuse and included stories that so many survivors lived with, in silence for all these years. Without their stories, he stated, “We could not come to the truth.”

“There are no easy answers, no magic wands,” he said. What is paramount now, he stated, is the “need to have good relations . . . . it’s what reconciliation is.”

Littlechild further alluded to the fact that many survivors never came forward because they were “too angry, too shy and some gave up hope.” He praised the presenters who, in speaking out “inspired others.”

On a final note, he said, “If we are to heal, we must return to spirituality.”

While the report does not and is not meant to provide solutions, it does hint at many areas requiring attention. As expected, a lot of the recommendations reflect major shortcomings in such areas as: education, housing, health and child welfare as well as language, cultural identity and missing children. 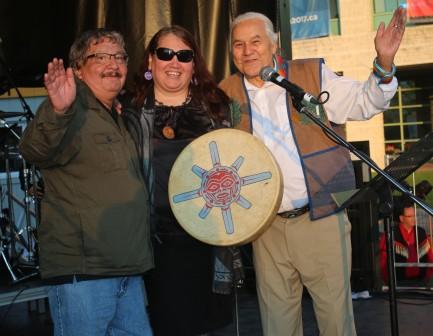 Mocassin Joe (left) and Winston Wuttanee (right) ham it up with one of the female singer drummers at the TRC Closing Ceremonies.

The report, according to Sinclair, puts the government in the driver’s seat to help lessen the number of Aboriginal children who are in care. It should also consider and act on repealing Section 43 of the Criminal Code that permits corporal punishment and resolve differences of federal funding for First Nation students. It should recognize that Aboriginal rights include language rights and government should strive to eliminate the overrepresentation of Aboriginals in jails, and establish an inquiry into missing and murdered Aboriginal women. At this point, nearly everyone in the ballroom jumped to its feet and applauded this statement loud and long. One of the few who did not do so, incidentally, was Aboriginal Affairs Minister Bernard Valcourt! That, to say the least, did not sit well with so many and certainly did not go by unnoticed.

In addressing the basis for many Aboriginal deaths, the report points to “poverty, domestic violence, overrepresentation of Natives in the child  welfare system. Sinclair claims that these and other factors “need to be examined as does the lack of success of police forces in solving these crimes against Aboriginal women.”

The Prime Minister apparently has declined comment on the report until the full version is available and that won’t happen until later in the year.

Even when that time does arrive, time will still be a major factor as government will want adequate opportunity to read it through at their convenience, digest it, then meet and discuss it before arriving at any decisions.

One can only pray that the report does not follow the route taken by the 1996 Royal Commission on Aboriginal People. That document, after all, accomplished very little which begs the question, “What can be done to make sure that the report and recommendations of the TRC do not simply sit and collect dust?

Truth and Reconciliation Commission issues an immediate Call to Action