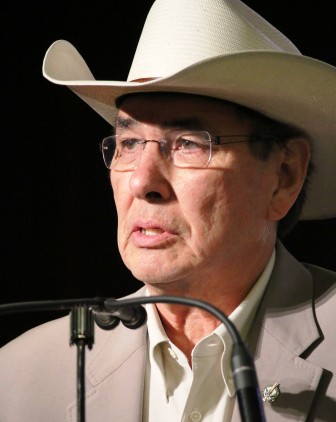 Chief Wilton (Willie) Littlechild didn’t necessarily want to spend the past six years of his life sitting as a commissioner of the Truth and Reconciliation Commission, but he told Alberta Native News that his involvement has been a life-changing experience and one that he will always remember.

“I really didn’t want to accept the position as a commissioner with the TRC,” he confided during a recent interview, “because our law practice was very busy and I was already quite involved protecting our own treaty rights and those of other Nations within Treaty 6. I finally relented and agreed to accept the position; as a Chief I was already involved and familiar with the goings-on and as a former Indian Residential School student and thriver I knew what others had also faced during those terrible years. It was a very challenging job and one that took its toll on all of us but I am so happy now that I said ‘yes’ when I did. I believe that the results of the work we accomplished over the years will have a major impact on setting the records straight and allowing Aboriginal peoples across this land to heal, to move forward and to eventually be accepted and treated as the equal partners we have always been in Canada.” 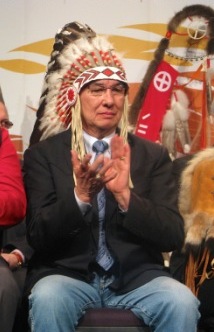 Born on the Ermineskin First Nation at Maskwacis, Alberta on April 1, 1944, Willie Littlechild comes from a large family that includes seven sisters and four brothers. Raised by his grandparents, Chief Dan Minde and Mary Jane Minde, he grew to become the first First Nations treaty person in Alberta to earn a law degree from the University of Alberta.

“My grandfather schooled me in the traditional and cultural ways of our people; my grandmother was a great believer in education and she made certain that my grades were kept up,” he said. “She was right, of course because education is one of the reasons why I have been able to realize some success in life.”

There were also some troubled times. In 1950, at the age of six, he was put into residential school and later transferred to another residential school to complete his high school education. He spent 14 years in these institutions and though he did experience and bear witness to many sad and tragic scenes of abuse, he prefers to focus on and remember the positive experiences.

“Life might have continued to take a negative turn, but when I found sports, it was the beginning of a new era for me,” he explained. “I was saved by sports.”

And he was saved by the realization that if “I worked hard and practiced often, I could become a good athlete, and so it went.” 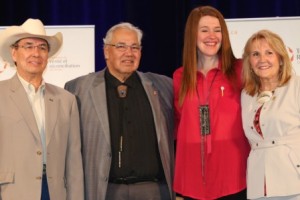 Sports helped him escape the dark clouds the infamous schools had laid at his feet. Sports helped him get into the University of Alberta, sports enabled him to move ahead in life. Sports gave him the opportunity to play, coach and promote athletics, and it helped give him the ability to initiate the first all-Aboriginal hockey team in the province. While attending university Willie played on the Golden Bears hockey team, he was a member of swimming teams and he was the manager of both football and basketball teams. He graduated in 1967 with a Bachelor of Physical Education degree. In 1975 he returned to school to complete his Masters Degree in Physical Education.

Sports also led him to his greatest accomplishment; he met and married his wife Helen and today they are sharing 45 years of marriage.

“This has truly been my biggest joy, my biggest success,” he said. “It’s been wonderful; we’ve always enjoyed a good relationship and Helen has often been the game-changer. It’s impossible to come up with the right words to express the warmth and appreciation that I have for her.”

Together, the couple has raised three children; education, integrity and family values have played an important role in the raising of their children.

Law is the business that Wilton Littlechild is most known for today and if it hadn’t been for an unfortunate leg fracture during a fall while skiing, he may not have entered law school at all.

“I was sidelined with a broken leg but I wanted to continue with sports in some capacity,” he explained, “so I turned to coaching hockey at the junior level.”

That’s when he launched the all-Aboriginal hockey team, all the while encouraging his players to concentrate on their schooling and their grades if they wanted to play on the team. When National Hockey League managers and officials offered him the opportunity to attend a professional hockey academy he accepted and in time he learned that most of those invited were lawyers. That’s when he decided that if he wanted to succeed in sports, he’d have to earn a law degree. It was here that he learned that there were only five law students and only three Aboriginal lawyers in the country at the time.

“I quickly realized that there was a real need for lawyers, especially when it came to Indigenous law, so I put my sports plans aside for the moment and went to law school.”

In the meantime, the Cree Nations at what was then known as Hobbema, now Maskwacis, honoured the young lawyer by presenting him with the headdress of an Honourary Chief and by endowing upon him the name of his grandfather, Mahihgan Pimoteyw, or Walking Wolf.

“This was one of the greatest honours of my life,” he said. “Recognition comes in a variety of ways but when you are honoured and recognized by your community, your Elders and peers, there is no greater honour.”

Perhaps that’s why after all this time and with so many opportunities to relocate elsewhere, he remains at Maskwacis. Respected and internationally known as one of the pioneers in the field of international Indigenous law, Chief Littlechild has worked with the United Nations for more than 30 years, advocating the rights of Aboriginal Peoples all over the world. Understanding the contributions  he has made and because of his background in international law, the Elders asked Littlechild, as a young lawyer, to address the UN and inform them that Treaties, the partnerships between the Indigenous Nations and the Crown, were being violated. He accepted and travelled to London, England to successfully delay the patriation of Canada’s Constitution until the Treaties were included in the Constitution.

An avid sportsman and athlete, Willie Littlechild has won more than 70 provincial, regional, national and international championships. He was a founder of the North American Indigenous Games, and was selected as a torch bearer and ambassador for the 2010 Olympics.

“This was another of the many milestones that I’ve been blessed to participate in. It was a proud and shining moment for me to stand there surrounded by some of the finest athletes in Canada and others from across the world. It was truly a great honour for me.”

He has been inducted into seven sports Halls of Fame. He was appointed as Honourary Chief for the Maskwacis Crees and also honoured by the Chiefs of the Confederacy of Treaty 7 and 8 First Nations as the International Chief for Treaty 6, 7 and 8. Chief Littlechild is a dedicated advocate of the implementation of treaties between Indigenous peoples and the Crown, and a pioneer of the global Indigenous rights movement. In 2014 he was honoured with the Alberta Order of Excellence and he is most recently the 2015 recipient of the prestigious Indspire Award in the category of Law and Justice.

Wilton Littlechild believes the United Nations is an important mechanism to promote peace and respect and has worked diligently on economic, social, cultural, civil, political and spiritual rights at the UN. His international work includes the UN Human Rights Council, world conferences and seminars, the UN Permanent Forum on Indigenous Issues, as well as being a representative of the International Organization of Indigenous Resource Development. He is a founding member of the Indigenous Initiative for Peace, the chairperson for the Denver Text of the OAS Declaration on the Rights of Indigenous Peoples and a member and VP for the Indigenous Parliament of the Americas.

In Canada, Willie was the first Treaty Indian Member of Parliament. He served a five-year term from 1988 to 1993, representing the riding of Wetaskiwin, Alberta, and was a parliamentary delegate to the UN. His name was already widely known due to his sports career when he ran for parliament, but he worked hard knocking on doors and using humour in debates, to win the riding with a majority. His travel schedule was tough on his young family but making decisions for Canada was a “tremendous honour” and he was thrilled “to be given the opportunity to build on the great strengths of our land.”

In an interview Chief Littlechild talked about the Declaration on the Rights of Indigenous Peoples, noting that when it came to fruition, “it was one of the proudest moments of my life and I believe one of the most important documents I have ever been involved with. “To have the United Nations adopt this very important declaration and to have been able to participate as co-chair, was very rewarding to me. It is the single most important document that I have ever been associated with and the one that I am most proud of. I was involved in the process for 27 years so to see it finally be adopted by the United Nations was very exciting.”

But, he noted, “I felt betrayed, when after all the work we had done, and with the government fully aware and in fact as one of Declaration’s initiators, that Canada refused to support and endorse it – they voted against it.”

Canada later proposed changes to the document, but these were not accepted. While it has been endorsed by most of the world, Canada, the USA, Australia and New Zealand still aren’t fully on board.

The Truth and Reconciliation Commission (TRC) of Canada has fulfilled its mandate and though there is still more to do, the seemingly impossible task that took the project’s three commissioners six years, is now complete. Its Final Report has been delivered. The findings make it clear that the mandate of successive Canadian governments was to suppress and assimilate Aboriginal peoples through the removal of their governments, their cultures, their languages and their children, however punishment is not an option. In fact, Canadians will have to count on the good will and foresight of that same government bureaucracy to make the necessary changes and take the necessary steps to ensure that the evils of the past can be put aside so that Aboriginal people can grow and their communities can thrive.

Thank you Honourable Justice Murray Sinclair, Dr. Marie Wilson and Chief Wilton Littlechild for the sacrifices you have made during the past six years in an effort to bring closure to more than 150 years of residential school abuse and the aftermath of that archaic and brutal system of assimilation and cultural genocide.

As we march into the future perhaps we can take a bit of advice from Mr. Littlechild’s motto, one that has been with him for nearly 60 years: “Stay positive and never be afraid to challenge yourself. Remember that winners don’t quit and quitters don’t win. Having a spiritual base along with the cultural, physical, and mental elements are very important to us all; stay focused and realize your goals.”

1 Comment on "Chief Wilton Littlechild: Truth and Reconciliation Commission was a life-changing experience"