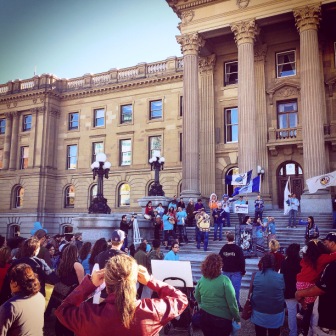 About 300 people gathered at Boyle Street Community Plaza in Edmonton on October 4 for the Sisters in Spirit vigil. The event featured several speakers including family members of missing and murdered Indigenous women, elders, chiefs and supporters. People attended from all over Alberta as well as far away as Saskatchewan and British Columbia. Held annually in correlation with other communities across Canada, the pressure is greatly building for the federal government to call a public inquiry into the matter of missing and murdered Indigenous women.

Elder Dale Awasis of Thunderchild First Nation vowed to cut his long, braided hair to express his lament about the lack of action from authorities.

“To show how heavy my heart is and the sorrow that I feel,” said Awasis. “Especially when I heard the Prime Minister denied an inquiry.” 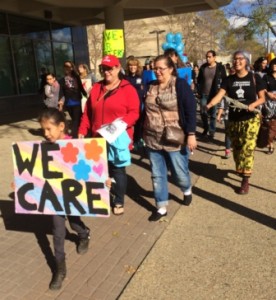 The Sisters in Spirit movement held marches across Canada on October 4th including the one held in Edmonton. Article and photos by Brandi Morin

Last August Prime Minister Stephen Harper brushed off calls for a national inquiry following the murder of 15-year-old First Nations girl, Tina Fontaine. Fontaine’s body was found wrapped in a bag on the Red River in Winnipeg. Her death prompted a national outcry for the government to step in.

However, Harper said he was satisfied with prior studies that have been conducted.

“It’s very clear that there has been very fulsome study of this particular…of these particular things,” he said.

In Canada there are nearly 1, 200 cases of missing and murdered Indigenous women documented over the last 30 years. However, that number is projected to grow exponentially upon the accurate breakdown of additional data that an inquiry would allow.

The Native Women’s Association of Canada (NWA) describes the Sisters in Spirit vigils as a movement of social change. They believe a public inquiry would be a crucial step in implementing a comprehensive and coordinated national action plan that is required to address the scale and severity of violence faced by Aboriginal women and girls. The NWAC  is calling on First Nations, Metis and Inuit peoples as well as other concerned citizens to rise up and together demand action and secure commitments from all levels of government. 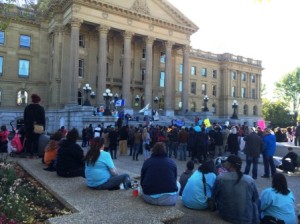 Over 300 people marched in Edmonton from Boyle Street to the Alberta Legislature to support action on the issue of missing and murdered Aboriginal women in Canada.

Billy Joe Tuccaro a councillor at Mikisew Cree First Nation gave an emotional address at the event. His sister Amber Tuccaro vanished after getting into an unknown man’s vehicle during a visit to Edmonton in the summer of 2010. Tuccaro’s remains were found two years later by several horseback riders on a rural property near Leduc. No arrests have been made, however the RCMP released a recording of a conversation between Tuccaro and an unknown man recorded the night she went missing. It is hoped that someone will recognize the man’s voice in order to help identify a suspect in her disappearance.

Mikisew Cree Chief Steve Courtoreille said it’s about time something was done but expressed a lack of faith in the government to intercede.

“It doesn’t look like they’re going to do anything,” said Courtoreille. “It seems like the prime minister has no interest in doing a national inquiry.”

Co-organizer Amanda Gould, has lost several loved ones and plans to stay determined until action is taken on the issue.  “They (the government) have to listen to us,” she declared.

“There’s no if’s, and’s or but’s about it. We’re here. And we’re going to keep doing this until we are heard!”

The group marched from Boyle Street to the steps of the Alberta Legislature building where a rally was held to send a message to political leaders.

Alberta Liberal leader Raj Sherman joined the call for a national inquiry and said he is shocked by the lack of action shown by governments on the matter.  “This is a tragic example of our society’s collective failure to improve the lives of First Nations,” said Sherman.

“The culture of systemic violence against Aboriginal women has been too often ignored, or written off by our society. This must end.

“I am saddened that, thus far, our calls for a national public inquiry have been ignored by our conservative premier and the prime minister. This inquiry must happen to give the families of these women the closure they need and to prevent more Aboriginal women from being murdered or going missing.”

The NWAC hopes that Aboriginal and non-Aboriginal leadership will soon unite and signal their support and commitment to the issue.

“Now is the time to come together and demand action. When we show we are a united front, we hope all levels of government will listen,” said President Michele Audette.